TED launched a new initiative called the City 2.0. It will harness the great ideas and actions of people around the world to improve cities — but really?

Work by Candy Chang, an artist and urban planner featured at The City 2.0. Civic Center

Every year since 2005, the thought-leader lecture series TED has given out a prize of $100,000 to individuals that are changing the world. Past winners include Bono, Jamie Oliver and Cameron Sinclair of Architecture for Humanity. In 2012, instead of giving the prize to a person, the organization decided to give the prize to an idea: The City 2.0.

Last night, TED web-streamed the prize announcement by gathering urban luminaries like Whole Earth Catalog founder Stewart Brand, artist Candy Chang and High Line co-founder Robert Hammond, as well as many corporate urban leaders from IBM, Intuit and other companies. Funded by the Knight Foundation, The City 2.0 turned out to be not just an idea but actually a website that is intended to harness the resources and ideas of urbanists around the world to improve cities. Included in the website is a competition to find the 10 most innovative collaborative projects in cities around the world; winners will receive $10,000 and a lot of attention. The question is: How is this project going to be different than other similar efforts, like Change by Us, that use the web to solve urban problems?

The integration of technology and civic life is here to stay, but how exactly we use technology to improve civic life is still unclear. Last night Next American City hosted an event with Code for America to listen to what fellows have learned about Philadelphia and how they are hoping to make a dashboard that will help residents improve the city. Their idea of focusing on “middle management” — those people who run community organizations at a level below government but which have some authority in their neighborhoods — is a smart one. It recognizes that every community works differently and the middle management knows those communities best. As Charles Holliday, a community liaison from Greater Brewerytown Community Development Corporation, explained, in his neighborhood many people use SMS and Facebook but don’t have smartphones or much web savvy; the way his community uses the Internet is going to be very different from that of more affluent Fairmount, just a few blocks south. 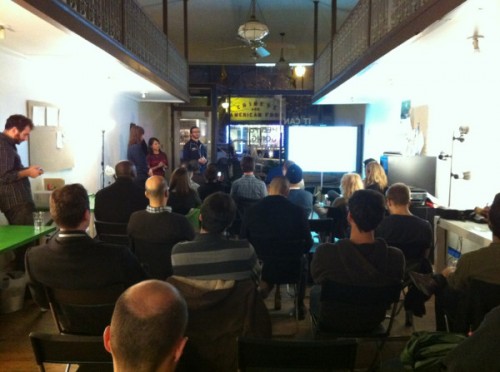 Code for America presents at the NAC storefront.
Credit: Next American City

It turns out that the digital divide is much more nuanced than we thought — in fact, “divide” is not the right word for it. It’s a digital patchwork that in some ways resembles the physical patchwork of cities like Philadelphia that have tons of vacant land. Many solutions for vacant land issues (interestingly, one of three major topics that Code for America focused on in Philadelphia) require complex and in-person responses in addition to good data and transparency. It may be that the Internet is not the best medium for some kinds of civic change, but many people in the technology and media sector refuse to accept that.

While the Internet is great for ordering shoes or reading blogs, it might just not be the best holistic system to organize people or to create change in cities. We have realized that the public sector isn’t going to solve every civic crisis alone, but in fact works best when partnering with the private and non-profit sector. It could be that the Internet, by itself, is also insufficient. While the competition portion of The City 2.0 is clearly oriented toward that kind of in-person collaboration that is required to create change in cities, the TED prize, with its “wish list,” suggests that the Internet is the magic wand that’s going to jumpstart change in our communities.

TED does a disservice to the urbanist community by getting such hardworking and important figures in urbanism to suggest it’s that easy or simple to upend the status quo. Anyone who has read about the High Line, for example, knows that structure wouldn’t have been saved, redesigned and funded by wishes or social networking. It took people moving outside the comfort of their email in-boxes, interacting in real time, with real political structures and communities. It will take all that, and the Internet, to make the next High Line.

An earlier version of this story incorrectly associated Cameron Sinclair with Habitat for Humanity. Sinclair is executive director of Architecture for Humanity. And we misspelled Jamie Oliver’s name. Alas, this piece was written quickly in order to be timely.