An Indianapolis native remembers what made driving in the city so efficient, safe and visually appealing all at once — and examines how a nearby suburb has taken it to a new level.

My hometown of Indianapolis has been a logically designed community based on traditional geometric shapes ever since its designer Alexander Ralston first put pen to paper. Monument Circle — source of the ‘Circle City’ nickname — sits at the heart of the original mile square, with a radiating street pattern extending outward from there, though it becomes more grid-oriented in the midtown areas. Later, an outer loop (not circle) was created by Interstate 465 and a near-perfect oval was constructed for high-speed excitement and adventure in the suburb of Speedway.

Because of Monument Circle and the I-465 outer loop, the motor speedway was not the only place you could do laps in and around Indianapolis.

As a young person, I found the grid layout rather boring compared to the winding streets elsewhere. For the longest time, Kessler Boulevard and Spring Mill Road were my two favorite streets because they had curves in them. In the end, I realized it was not the street pattern that bothered me, but the lack of topographic change. The big advantage of the city’s spatial form: You rarely, if ever, got lost.

Now that I have not lived in Indiana for many years, I find the city’s original spatial form to be inspired. However, the nickname of Circle City may have been co-opted by its rapidly growing neighbor to the north.

Today, if you want to do laps in metropolitan Indianapolis, the place to do them is in the burgeoning northern suburb of Carmel (2011 est. population of 85,000). The City of Carmel has the distinction of having more roundabouts than any other municipality in the United States – more than 80 built or planned at last count. By comparison, the suburb of Greater Lansing, where I live, has fewer than one hand’s worth. Compared to Carmel, we have only stuck our pinky toe into the whirling roundabout waters.

Because of Carmel’s documented leadership in roundabouts, the Transportation Research Board (TRB) held its third annual International Roundabout Conference there in 2011. 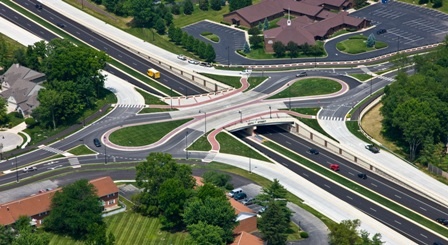 The advantages of roundabouts are numerous. A few of them are cited below, many of which are also included in a very useful brochure the city has published:

• Roundabouts keep traffic flowing, which is much more energy efficient than stopping, idling, and starting at traffic signals.

• Roundabouts force the vehicular traffic to slow down considerably at intersections which improves safety for pedestrians and cyclists and allows for freer movement of non-motorized traffic.

• Despite the higher up-front construction cost,  roundabouts are much more cost effective over the long haul.

• Repairs from accidents that occur in roundabouts are less costly.

• Injuries suffered in accidents in roundabouts are less severe.

• Roundabouts are much more aesthetically pleasing, especially when landscaping and artwork are incorporated into the center island — a requirement in Carmel.

Are roundabouts perfect for every intersection? Of course not. Some intersections have insurmountable natural or manmade features. But as Carmel has proven, they can be successfully employed in a variety of locations, even expressway exits (see photo above from the Keystone Parkway). Kudos to the city for being an innovative worldwide leader in roundabouts.