With the redistricting of New York state a current fixture in the news, it can be hard to keep up with all the arcane tactics debated by local pols and policy wonks. To help bring you up to speed, The New York World made a series of interactive maps showing how redistricting can affect communities.

So many redistricting strategies, we lost count. Jared Rodriguez, Truthout.org

This piece originally appeared on The New York World.

As accusations of gerrymandering and disenfranchisement fly, we set out to answer two basic questions: How exactly do districts get gerrymandered – that is, have their boundaries manipulated to benefit a political party or group? And where, if at all, is it happening in New York?

Using the map, we’ve literally gone between the lines of the new plans to reveal where gerrymandering may have occurred. With thanks to our friends at ProPublica – who produced a Devil’s Dictionary and curiously catchy music video on redistricting – we illustrate the tactics of redistricting warfare and where they are being deployed in New York.

Cracking divides a community, whether racial, geographic or otherwise defined, into multiple districts to prevent it from holding sway in any one of them. Some of the fiercest criticisms of the task force’s proposal for the State Senate charge that it has cracked black and Latino communities in Suffolk County, Long Island. Significant African-American communities in the areas of Babylon and Amityville are split between the 4th and 8th Senate districts. A large Latino community in Brentwood is cut nearly in half between the 3rd and 4th Senate districts. (Interactive View) 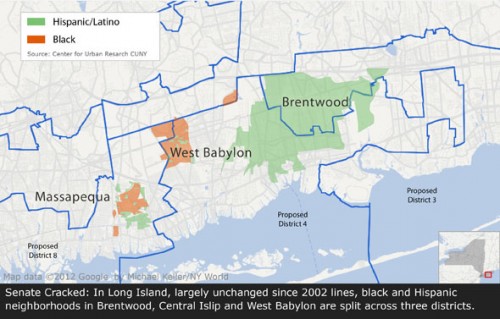 Most of the attention has focused on the high stakes battle over the Senate, where Republicans control redistricting and are clinging to a precarious 32-to-30 majority. But the Democratic-controlled State Assembly has also produced proposed boundaries that have Republicans and good government groups crying foul. In Queens, the Middle Village area, which has relatively high numbers of voters registered with the Republican or Conservative parties, is cracked between four separate districts in a move the reform group Common Cause has denounced as an “overt partisan gerrymander.” (Interactive View) 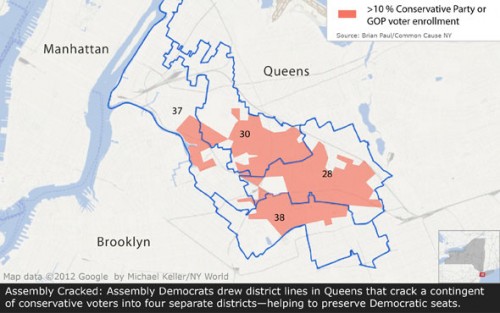 Kidnapping targets an elected official – often an incumbent of the opposing party – by moving his or her residence out of a district where they have developed a crucial political base. Deprived of many the constituents who voted them into office, kidnapped legislators are then pitted against another incumbent (often a member of their own party) in order to keep their seat. Sen. Michael Gianaris (D-Astoria), the influential chairman of the Democratic Senatorial Campaign Committee, has seen his residence sliced from the Senate’s 12th district and appended to the 13th district, setting him against fellow Democrat and Senate Minority Whip José Peralta. The district lines have moved by only about three blocks, but the shift neatly encompasses Gianaris’ home. (Interactive View) 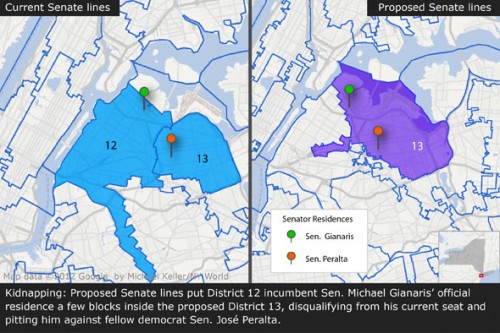 Diluting weakens the voting power of a politically unfriendly region by stuffing large populations into a smaller number of districts. This waters down the votes of the region’s residents and provides them with fewer representatives overall. We’ve written at length about the dilution of the votes of New York City residents, who traditionally favor Democrats, by the GOP-controlled State Senate. According to an analysis by former Democratic LATFOR staffer Todd Breitbart, the proposed new Senate maps squeeze the population of 26.93 average-sized districts in New York City into only 26 seats, providing the city with nearly an entire district less than it is entitled to. In mathematical terms, a Senate vote in New York City would weigh 7.3 percent less than a vote from the upstate region. (Interactive View) 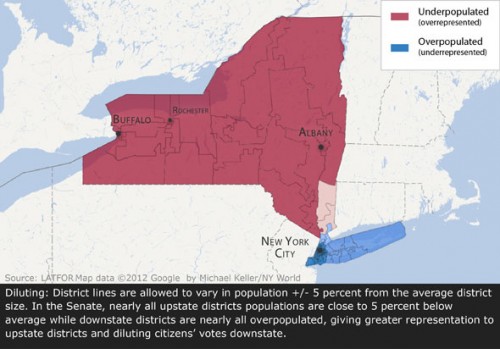 Dividing splits geographic areas that are supposed to be kept together under New York state law, such as the area contained in a single county. Counties should only be split when their population does not fit evenly into one or more districts, or in order to preserve other communities of interest such as racial minorities. Albany County is split between two Senate districts, even though its population is sufficient to have its own. One of these districts is the controversial 63rd seat added by Republicans to the Senate, which the Albany Times-Union reports was allegedly tailored by GOP leaders to allow Assemblyman George Amedore (R-Rotterdam) to make a run for the Senate. (Interactive View) 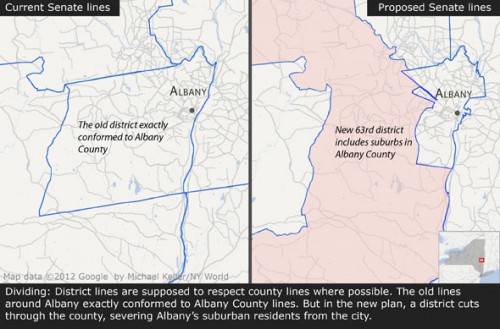 Tactic to Watch Out For: Decoying

When it’s hard to understand why a district is drawn along peculiar or questionable lines, it may be a decoy. Although the New York State constitution calls for districts to “be in as compact form as practicable,” many Brooklyn Senate districts look more like pieces of a jigsaw puzzle. The sawtoothed district lines are unlikely to affect the outcomes of any races in heavily Democratic Brooklyn. Nonetheless, experts like Breitbart say these ungainly boundaries represent another tactic in redistricting warfare. “If it is impossible to imagine what partisan advantage the Senate Majority could gain from an obnoxious feature, it is probably designed as a target of criticism, to be taken out later in a display of listening to the people – while the obnoxious features they really want remain intact,” Breitbart wrote in an analysis of the proposed redistricting plan that he distributed to redistricting experts and members of the media. (Interactive View) 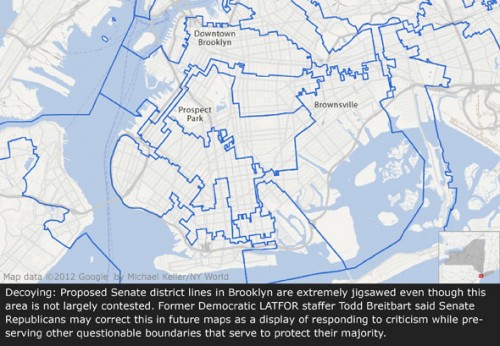