That Special Kind of Love

That Special Kind of Love

When you’re a city nerd, you sometimes love buildings as much as people. Or at least I do. In St. Louis, you can celebrate Valentine’s Day with the building you really love.

There are buildings that can get my heart racing. In Philadelphia, where I live and where the pickings are somewhat slim, I get a little excited about Frank Furness’s library at the U. of Penn. On the other end of the spectrum, I covet the PSFS building’s I-Style lettering. And in Chestnut Hill, the Esherick House by Louis Kahn makes me swoon. Don’t even get me started about my hometown of New York. The Woolworth, that Sullivan building on Bleecker Street, the Lever House and the Paul Rudolph townhouse are just a few that come to mind in thirty seconds of thinking. What is it about these buildings? I’m not sure except that they each seem to express a purity of a style. When I see these buildings, they are like old friends — there’s an understanding they have about me and I have about them. Maybe I’m getting sentimental because it’s almost Valentine’s Day… 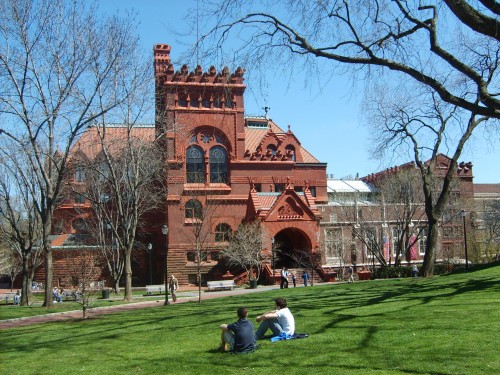 The Fisher Library by Frank Furness

In St. Louis, there is a building called the San Luis and although I’ve never seen it, I can imagine that if I lived there I’d probably love this building. STL-Style, a t-shirt manufacturer that we covered in Issue No. 21, sent us this press release about the impending demolition of the building and the love-in that’s being organized to prevent that from happening. 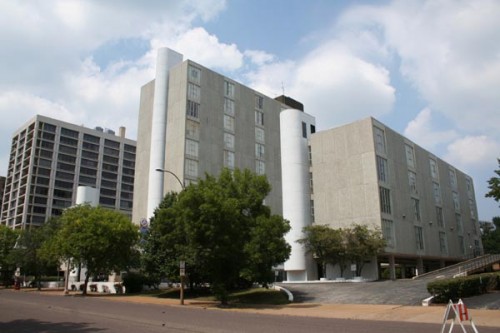 It seems like this is the perfect combination for the right kind of person — a Valentine’s Day date with a hot building. Below, is the bulk of the press release:

Valentine’s Day is when we express our appreciation for that special someone who completes us – the one who has been there for us through all kinds of weather, and whom we too often take for granted. This Valentine’s Day, we urbanists come together to show our affection for a unique, largely misunderstood building which completes the historic streetscape of Lindell Boulevard and is now threatened by the wrecking ball. The San Luis needs a little love.

The citizens’ group Friends of the San Luis is sponsoring a Valentine’s Day Love-In to honor this mid-century modern building located on the northeast corner of Lindell and Taylor in the heart of the Central West End. Members will spread the love throughout the neighborhood before joining at noon to give the San Luis one giant, proverbial hug. Designed by nationally-acclaimed New Orleans architect Charles Colbert, FAIA, and opened as the DeVille Motor Hotel in 1963, the sleek E-shaped San Luis has held her arms out to the city for nearly fifty years. Now the Archdiocese of St. Louis wants to demolish the building in favor of a gigantic surface parking lot – what could be less romantic than that?

With some vision and imagination, the San Luis could be apartments, student housing, a hotel – anything is possible, especially with some tender devotion. St. Louis’s diverse building stock is one of its greatest competitive advantages, and the San Luis represents an uncommon and quickly fading piece of the city’s architectural tapestry. The proposed parking lot is offensive to the inherently urban context of the neighborhood and conflicts with the guidelines prescribed for the Central West End Historic District in which the San Luis stands.

The San Luis is waiting for the Central West End to hug her back. Platonic? Hardly. This lady is looking for love, and some of us want to give her exactly what she desires. Of course, this Love-In will also make a fine date for you and your sweetheart. There’s nothing like the backdrop of a gorgeous building to spark the flames of romance!