Taking it to the Streets

In her column, Divercity, Jody Pollock reports on how cities are increasingly attacking urban problems like poverty and homelessness with sports-related initiatives.

Two years ago, Anne Mahlum was taking her morning run through the streets of Philadelphia, passing as always the same group of homeless men on the corner of 13th and Vine. She usually waved and kept running. But one sticky July morning, Mahlum stopped and asked the nine men whether they would like to join her.

This fortuitous conversation would be the beginning of Back on My Feet, a Philadelphia-based non-profit that engages the homeless in running as a means to build confidence, strength and self-esteem. In addition to its morning jogs and participation in everything from competitive races to full-on marathons, Back on My Feet provides services to help its participants get off the street – unless they are running, of course. The young organization offers job and financial literacy training, scholarships and housing assistance for its runners, many of whom have put an end to their homelessness through the program. 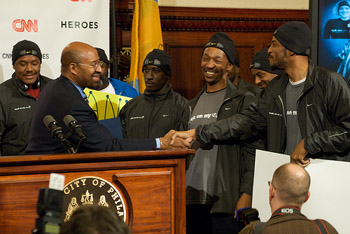 Philadelphia Mayor Michael Nutter greeting Back on My Feet participants.

Back on My Feet has run a veritable marathon of its own, now operating six shelters with over 100 residential members in Philadelphia. Last November, Mahlum was named one of CNN’s Top 10 Heroes of the Year. Back on My Feet is currently in the process of expanding to Baltimore, and earlier this month they took their first run in their second city. They hope to add a third partner location in a few months, and with requests piling in from every state and even from abroad, Back on My Feet is facing a tough decision. “Of course,” says Chairman Jonathan Shur, “we will take it one step at a time.”

Back on My Feet is part of an international trend of using sport as a means to alleviate urban problems. In 2005, the UN General Assembly declared the International Year of Sport and Physical Education to encourage the promotion and development of sports programs across the world in combating poverty, improving global health and reaching the Millennium Development Goals. That same year, the Commonwealth Advisory Body on Sports (CABOS) was formed to promote “the value of sport as a tool for social and economic development” in the 53 member countries of the British Commonwealth. The 12-member board has representatives from Barbados to Malaysia and even a South African specialist in disability sport. Their 2006 advisory report points to the role sports play in providing health benefits, improving academic attainment, developing leadership skills, and creating community cohesion.

Running, explains Back on My Feet’s Shur, is really a vehicle for greater self-sufficiency, and the organization’s approach to it seems to be working. Tangible and intangible benchmarks of success are measured on a weekly basis, and so far, 98% of respondents have reported improved self-esteem, 98% increased daily productivity and 55% having quit or suppressed their smoking habits.

Other urban sports programs are seeing similarly hopeful results. The Homeless World Cup, an annual, international soccer (football) tournament with grassroots football programs for the homeless in over 70 nations, reports improvements across the board in motivation, social relations, employment, housing and drug and alcohol dependency since its first game in Graz, Austria in 2003. Their roughly 70% success rate in significant life changes is unparalleled in most social inclusion projects, which normally experience a rate of around 30%, says Kat Byles, communications and media director for the Homeless World Cup. 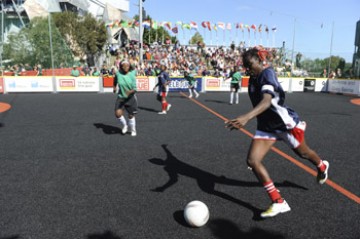 Participants in the 2008 Homeless World Cup in Melbourne.

But it’s not just about the players. For the around 100,000 spectators who attended the 2007 championship in Copenhagen, and for the hundreds more who attend other local or national games, the tournaments are coming to redefine public opinion on what it means to be homeless. Hands on hearts, belting national anthems, cheered by thousands, the players become heroes – “a very different place from where they first begin the journey, ignored, or worse, even spat at on the streets,” says Byles.

This year, with 30,000 homeless players engaged worldwide, Milan will be hosting the sixth Homeless World Cup tournament championship in September. “What is needed besides emergency actions and housing initiatives…are programs where the homeless people themselves are at the center of the solution,” explains Byles. “They have to feel part of society just like anyone else. Football can be a major force for social change here.”

That point is not lost on Magic Bus, a non-profit dedicated to bringing the sport of soccer to roughly 30,000 children living in the slums of Mumbai, Chandrapu and Medak, India. It will celebrate its tenth anniversary this year, and it is planning to open a new office in Delhi to serve an additional 1,000 children yearly through its partnership with UNICEF. “There are hundreds of NGOs which are addressing children’s basic needs such as food and shelter, but it is the secondary needs such as play, recreation and overall development which are neglected,” says Kate Snow, fundraising executive for Magic Bus. 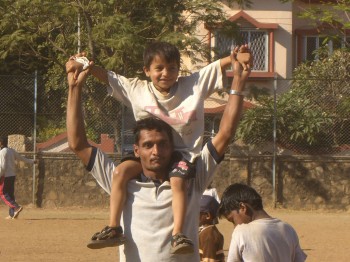 Children from India’s slums participate in athletic programs through the Magic Bus program.

Looking for a gender-neutral, wide-ranging sport, Magic Bus thought soccer seemed like a perfect fit, especially since its relative novelty in the slums meant most children would begin at square one – and that they would begin there together. The community-building that results from interactions between children of different sexes and religions is not accidental. The soccer program intentionally targets social exclusion, not just from outside the slums, but from within, as well, to create an even playing field.

The results, while perhaps not as tangible as filled stomachs or new roofs, are remarkable, says Snow. Participants leave football matches with improved confidence, concentration and teamwork. For example, older children often begin to take responsibility for newcomers, relationships that continue beyond the field and into the wider slum community. Magic Bus, which has almost reached its target of a 50-50 gender ratio, has also been credited with boosting girls’ self esteem.

The long-term goal is to create a “paradigm shift” in slum communities by empowering youth, explains Snow. This “fundamental shift in the mind-set of the next generation,” she says, will mean the perpetuation and reverberation of the positive messages that Magic Bus hopes to convey through sport.

“Sport cannot do it alone,” writes Bruce Kidd, chair of Commonwealth Advisory Body on Sports in an email. “But as part of a comprehensive strategy of public investment, it can make a powerful contribution.”

In the meantime, it’s just one step, one game, one packed stadium at a time.