In a companion article to her Issue 23 feature, “Air Apparent,” Hamida Kinge shares the results of the latest “State of the Air” report, which reminds Americans that air pollution is anything but a passé concern.

This is the introduction to a series of stories on air quality by Hamida Kinge, a 2008/09 Metcalf Institute Fellow reporting on the environment for Next American City magazine. Look for the print feature in the upcoming issue of the magazine, which hits newsstands in June.

The words “air pollution” may sound archaic or inflated. There is a sense that air has gotten dramatically cleaner and is not as worrisome a problem as some other environmental issues. Air rarely makes national news anymore, unless it’s about dirty air in another country, or unless there is speculation that a brown cloud is creeping over from China, dirtying the air in California – a theory that has yet to be proven. More accurately, America is dirtying its own air in cities from Los Angeles to Pittsburgh. And it’s getting dirty via coal-fired power plants, oil refineries and other industrial sources, massive ocean-going vessels, and diesel- and gasoline-powered engines of all kinds – from trucks to bulldozers to lawn-mowers. Despite the fact that the most prominent of politicians rarely if ever utter the words “air pollution” – the focus in the last few years has been on clean energy for the sake of decelerating climate change, although clean energy also has tremendous benefits for air, water and land. More than 50 percent of the country lives in areas where the air is unhealthy.

Last month, the American Lung Association, a watchdog and advocate for clean air for decades, has released its tenth annual State of the Air report, sometimes referred to as an air “report card.” The report comes often to the chagrin of those state and local environmental agencies whose cities and counties rank the worst for air. Two of the most widely recognized aspects of the report is that it gives letter grades of A-F to counties across the country and that it lists the top 25 most polluted cities. But those are small elements of the 182-page report, whose main concern is public health. The categories for pollution are ground-level ozone (smog), short-term particle pollution and year-round particle pollution – the three categories which represent the most widespread and acute health threats in the United States. 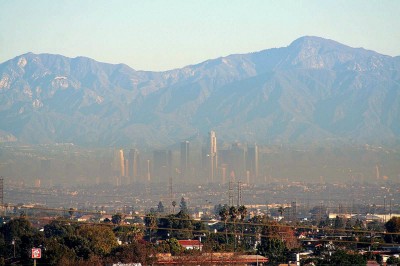 A smoggy day in L.A. town. Image via flickr.

The purpose of the report is to translate for consumption by the general public complex air monitoring data from the U.S. Environmental Protection Agency. The report explains, for example, the public health threats of ozone and fine particle pollution. Ozone is associated with respiratory ailments, and recent studies indicate that particulate matter is most responsible for the life-shortening effects of air pollution. The report explains that those at greater risk for harm by either are those with asthma, cardiovascular disease or diabetes, adults over 65 and children under 18, and those with chronic bronchitis and emphysema. It recognizes that poorer communities and communities of color are at a higher risk than other American groups.

State of the Air notes that scientist findings show that pollution sources are often located near disadvantaged communities. Lack of access to health care, good jobs, and grocery stores could also affect the risk of harm by exposure to pollutants. The ALA cites that socioeconomic status has, in recent years, become more consistently associated with greater harm to health from air pollution. Living near highways, they’ve found, can be especially dangerous. An example that comes to mind is South Central, Los Angeles, which is roughly enclosed by four high-traffic freeways: I-10 to the north, I-110 to the east, I-105 to the south and I-405 to the east.

Then comes the dirty truth. Here is how the dirtiest cities shaped up this year: 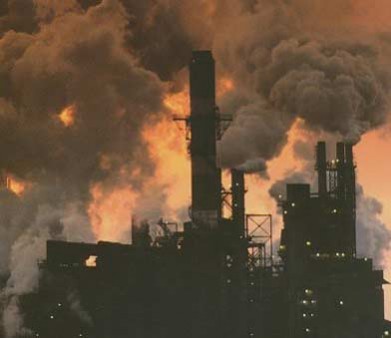 Houston, which ranks number five in ozone this year, is a very unusual city. Its mayor Bill White has done something few, if any, mayors nationally have done: confronted both the state and federal environmental agencies himself for their failure to address the dangers air pollution poses to his residents. At issue is benzene, a known carcinogen. Texas does not have a legal limit for benzene, and because of it, cities with concentrations of oil refineries and chemical plants, such as Houston, suffer staggering benzene emissions. Last year, White filed a petition to the Texas Commission on Environmental Quality for their lack of responsiveness to industry when it comes to benzene emissions. He’s also appealed to the EPA to address the state’s Flexible Permit, which he believes is at the root of the issue for plants finagling their way past emissions limits.

Some of the key health stats from the report include:

The American Lung Association calls for action to get the country’s air healthy:

* Cleaning up dirty power plants. Coal-fired power plants are among the largest contributors to particle pollution and ozone (not to mention heavy metals like mercury). Carbon spewing from these plants is also a major contributor to global warming. The Association calls for the EPA to take immediate action to get the dirtiest plants to clean up, and over the years has taken legal action to against plants (and often the EPA) to ensure that it happens. * Cleaning up the existing fleet of dirty diesel. The Association recognizes that the EPA has put a series of tough requirements in place for new diesel trucks, buses and heavy equipment. But that, says the Association, does nothing to address all of the older diesel vehicles. They note that economic recovery legislation is investing $300 at the EPA for the voluntary diesel retrofit program. * Clean up ocean-going vessels. Ocean-going vessels, such as the massive cargo ships found at the twin ports of Los Angeles and Long Beach, create what is often called “diesel death zones” on land when they get within miles of land. So too do cruise ships and tankers. Diesel fuel used in these ships is staggeringly dirtier than regular diesel. In cargo ships, “bunker fuel” is used, a tarry diesel that is a thousand to two thousand times as polluting as regular diesel. The ALA warns that by 2030, ocean-going vessels will be producing about 45 percent of mobile source particle pollution in the United States. The ALA is calling for the International Maritime Organization to grant the EPA the right to regulate these ships via international agreements.

You can read all about the sources for and dangers of particle and ozone pollution in the upcoming Next American City print feature, “Air Apparent,” which also present the legal complications that keep America’s air wavering, and the role advocacy groups play in the enforcement of the Clean Air Act.