As the days get longer, Pittsburgh gears up its citywide solar-power initiative.

Pittsburgh Mayor Luke Ravenstahl announced late last month that come autumn, the city’s firemen will be washing up with solar-heated water. The installation of a sun-powered hot-water heater in one of the city’s fire stations will come as the first concrete (or rather, crystalline silicon) step in the city’s move towards toward eco-friendlier infrastructure. Ravenstahl says he hopes that the new system will be a successful trial run for the retrofitting of all city-owned buildings with ray-capturing capabilities, and that from there, the trend will spread to privately owned structures as well. Eventually, Pittsburgh expects to meet .5% of its electricity needs with solar energy. 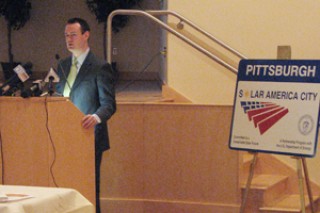 The mayor’s announcement came during the city’s first Solar America City Training Workshop, put on by the Department of Energy in accordance with its June 2007 designation of Pittsburgh as a “Solar America City.” The label has brought the city $200,000 in federal grant money and the equivalent in technical assistance. Part of former-President Bush’s Advanced Energy Initiative, the Solar America program is really a revamped version of the old Million Solar Roofs initiative—the difference being its new focus on city-level intervention. The program’s architects say they chose to work with municipalities rather than counties or states because as “centers of population and electricity loads…[cities] present great opportunities for solar market transformation.” Pittsburgh, along with the 12 other cities named in 2007, was chosen for its ongoing commitment to solar energy, exemplified by its signing of the U.S. Conference of Mayors’ Clean Cities agreement and its local universities’ interest in green research.

Certainly, environmental concerns have helped inspire Pittsburgh to harness the sun’s rays, but so has concern for something else that’s green: cash. In five to seven years, officials say, the solar water heater will save the city more money than it initially spent to install it. These long-term savings are just one of the key points that the Solar America campaign is trying to drive home (in a fuel-efficient car, of course) to residents and small-business owners as they encourage them to switch over. Right now, it seems, the biggest hurdle to implementing wider solar-power usage is not lack of motivation but rather simple market barriers, such as the high cost of installation. Pittsburgh, for its part, is hoping that its investment in solar energy will lead to the development of supportive business infrastructure as well as technical and information services.

Solar America is hoping it might generate even more than that. Between 2007 and 2008, they have sponsored 25 cities, part of the idea being that they might serve as models for other cities hoping to follow their reduced-carbon footprints to greener pastures. Pittsburgh is particularly important as an example among northern cities and cloudy ones (it ranks consistently among the top 20 rainiest urban areas). Essentially, the logic is, if Pittsburgh can do it, why can’t you?

What Is a Green Bank?

The Schools at the Front Lines of Solar