In her column, The Tipping Point, Hamida Kinge looks at a new United Nations report that links urban poverty, climate change and migration to cities from rural areas to “megadisasters.”

The report explains that the relationship between climate change and poverty will magnify as climate hazards increase. Climate-related disasters are not only increasing, says the report, but they are decreasing poor communities’ resilience to them. Millions who live in rural areas are at risk of landslides in regions where forests have been stripped away, and they may be at risk of debilitating droughts as rainfall patterns shift. 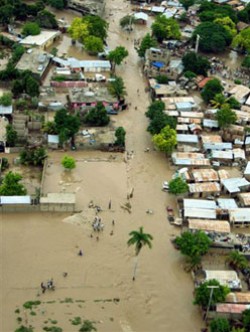 An obvious example of a place where climate-related flooding and landslides wreaked havoc is Gonaives, Haiti, which suffered megadisasters following Hurricane Jeanne in 2004 and Hurricanes Hanna and Ike in 2008. In the poorest nation in the Western Hemisphere, the storms set agriculture even further back, destroyed infrastructure, and killed thousands. Deforestation has made Gonaives so vulnerable: Without a single tree on the mountainsides surrounding the city, the barren soil could not absorb heavy rainfall. And without trees, the whirling winds of a cyclone cannot be slowed.

Right now, 900 million people worldwide live in shantytowns or slums in cities vulnerable to climate-related disasters, and the numbers are growing at a rate of 25 million per year. The report, which was released in the Gulf nation of Bahrain, says that India, China and other parts of Asia are at especially high risk for megadisasters. For example, last year in Myanmar (formerly Burma), Cyclone Nargis killed an estimated 140,000 people.

Andrew Maskrey, lead author of the report, acknowledges that it will be virtually impossible to stop the mass flight to cities in years to come, as people leave rural areas to seek work. What he suggests instead is that leaders devote their political will to fighting poverty so that the extremely poor do not suffer the most when climate-related disaster strikes. One such initiative, Maskrey notes, is in place in Bogota, Colombia, where the local government is attempting to improve conditions in slum areas.

It’s interesting that the report cites Asia as ground zero for megadisasters, overlooking the Caribbean, the Gulf Coast and South America. Islands in the Caribbean basin, which is bound by the Americas, are extremely prone to severe weather events. The old-time phrase “tempest in a teacup” provides a visual notion of how weather is trapped in the basin. Gonaives is one example, but heavy rains, changes in rainfall patterns and droughts are happening throughout the Caribbean at levels not seen in previous years. As Maskrey asserts, it will indeed be political will of those who govern the poor that will make the difference between a disaster and a megadisaster.