EDAW is hosting a fantastic contest for students called Urban:SOS (must be registered by tomorrow, May 15). They say: Find an urban site in disrepair. Fix it. I’m no longer a student, but if I were, I have a few ideas of what I’d fix.

Ah, to be a student. A carefree life or a time when the burden of the world is on your shoulders? Thinking back to the feisty person I was more than six years ago, I very much felt that I was going to change world after I graduated from college. EDAW has a slightly simpler task college and grad students: change an urban area.

The Urban SOS contest caught my eye because it’s exactly the kind of thinking we need. According to the website:


In an increasingly urban world, people across the globe are experiencing the opportunities and challenges that come with rapid urban growth and the evolution of cities. This includes many economic, social and cultural opportunities offered by urban areas, which often drive economic growth, and provide the cradle for social and cultural change. However, people in many urban areas face a range of challenges that affect quality of life, limit opportunities and perpetuate inequalities. These urban problems include:

It’s up to us to fix these problems, or at least think creatively about how to fix them. Next American City had a short-lived project called Revise that asked people to rethink a small urban problem, but it never quite took off. Maybe we should have sweetened the deal, as this contest does, by offering a $20,000 prize for the best urban revision. 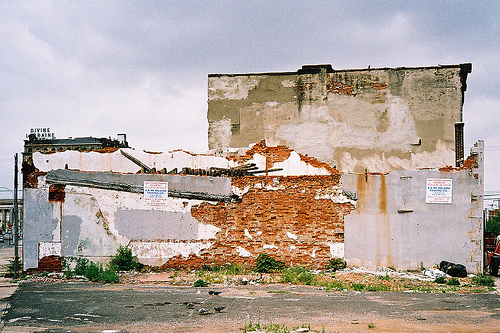 A vacant lot and building in Philadelphia. Photo by MikeWebkist.

If I were still a student, I’d focus my project on an area here in Philadelphia. Mantua or North Philadelphia. The problem is that I’m not sure if reclaiming vacant properties fits into any of the categories that EDAW wants its applicants to solve. Thinking about that omission made me wonder if the contest isn’t too focused on physical problems and is neglecting social conditions, like poverty. Does that suggest that adept planning can’t solve those larger problems? If you could improve one urban area, which one would it be and what would you do to fix it?