Despite opposition from local leaders, a private San Diego developer wants to build a huge sports stadium between the city’s waterfront and downtown. Architect Mark Hinshaw explains why this is a bad idea, and explains what other cities, like his native Seattle, could learn from the debate.

Seattle’s planning process for a new waterfront park has been winding through twists and turns, but it has been for the most part free of the rancor and controversy that typically surround large redevelopment initiatives. Indeed, at times, the conceptual work on the new park has almost been a love fest. Landscape architect James Corner’s mellifluous descriptions of expansive grassy roofs, angular folds, and fun-filled spaces replete with street vendors, performance art, heated pools and teeming crowds have been met by appreciative audiences—so far.

But 1,250 miles to the south, at the other end of the left coast, another city is embroiled in a throwdown between its mayor and a powerful local developer. San Diego Mayor Jerry Sanders has long advocated an expansion of the city’s elongated convention center, located between the downtown and the bay. Despite its dramatic form, the convention center has created a lengthy wall with a row of truck docks facing the water. Mayor Sanders wants to rearrange the functions of the building and open it to water views and a series of connected public spaces.

Enter the ebullient and prickly hotel developer Doug Manchester, who insists on people calling him “Papa Doug,” with his own grand vision. Last year Manchester purchased the venerable, 144-year-old San Diego Union-Tribune. He immediately began using its front pages to trumpet a proposal to locate a new San Diego Chargers football stadium, along with an additional smaller arena, on the Tenth Ave. Marine Terminal that is immediately to the south of the convention center. Now a full civic debate is under way.

This idea has run afoul of several groups, not the least of which is the mayor. Mayor Sanders has been working for some time on another site just east of downtown for the stadium, intended to replace a facility that is literally crumbling. The U-T proposal would displace the marine terminal that receives regular cargo ships called the “banana boats.” These colorful vessels, painted yellow, are emblazoned with the Dole Fruit Company’s big, four letter name and contribute to what little remains of the working waterfront. Each month, Dole brings in almost 200 million bananas and off-loads them into the adjacent warehouses.

Predictably, the maritime labor unions are enraged over what they view as the cavalier tossing away of jobs—the boats are unloaded old-school way with cranes and cargo nets, a rarity on any urban waterfront.  Environmental groups are girding for a legal fight as they maintain a big sports arena runs afoul of state laws for coastal management. Like our Shoreline Act, which mandates water-dependent and water-related uses, the law is limiting when it comes to permitted land uses.

It’s pretty hard to argue that a stadium needs to be on the shoreline. There are some examples, such as Candlestick Park in San Francisco, that only go to show how they crowd out public access to the waterfront, bring in acres of parking, and jam up waterfront roadways. Mindful of these problems, stadium advocates in San Diego claim the stadium should be viewed as a form of public recreation.  If such a creative interpretation of the law is not possible, then the back-up notion is to just change the coastal management law. Good luck with that. 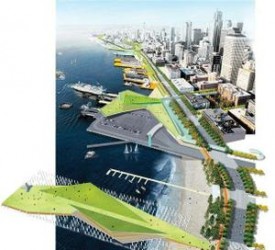 I recently took in the San Diego skyline from a slender promenade a few miles west — a viewpoint similar to what we have from Alki Beach in West Seattle. Dozens of recently-constructed towers glistened in the mid-winter sun, with hulking cruise ships nestled into docks in the foreground. Word has it that some San Diegans have noted how dramatic the Seattle skyline is, bookended on the south by visually prominent sport venues. “Wouldn’t San Diego benefit from a similar structure gracing its waterfront profile?” they ask.

The U-T’s seductive renderings show the stadium swathed in landscaped public spaces laced with esplanades and landscaped walkways. The message is less than subtle. Want a big park? Then you will have to accept a big stadium. But most locals aren’t buying that proposition. Manchester has flexed his political muscles before, more bombastically than successfully. The stadium-on-the-water idea was proposed at least once before and was  squashed pretty soundly.

This dust-up brings to mind the short-lived and misguided proposal eight years ago to bulldoze the Terminal 46 container shipping yard south of the Colman Dock ferry terminal and replace it with a new neighborhood of high-rise condominiums and office buildings, as well as an arena for the Sonics basketball team. Elaborate plans were prepared by a couple of prominent developers, neither of whom controlled the land or bothered to consult in advance with the actual landowner — the Port of Seattle. An embarrassed Port had to reassure the Hanjin shipping company in Korea that it wasn’t about to be given the boot.

So what is the take-away for Seattle? In recent years, waterfronts around the world have attracted big ideas. Such blockbuster ideas often sweep away virtually anything left of earlier eras of maritime commerce, docks, shipping and commerce. So valuable are these places that they lend themselves to drama and such civic hubris.

But we in Seattle have a tradition that builds upon the actions and investments of many separate agencies, companies, institutions and organizations. The Pike Place Market is a vivid manifestation of this marvelous mélange of small, home-grown businesses, skillful management, citizen oversight and thousands of people who care deeply about the place and spend their time and money there.

What need to find a way to extend that collective and idiosyncratic energy down to the waterfront by allowing lots of things and activities—both big and small, elegant and gritty, artful and funky, composed and messy, cooked and raw. Seattle’s great social stewpot is all about nurturing and celebrating the glorious whole that comes from many disparate parts.

Mark Hinshaw, FAIA, is an architect and urban planner at a Seattle architecture firm. He was an architecture critic for The Seattle Times and is the author of many articles and books, including Citistate Seattle (1999).