Yonkers has a river that lay beneath an asphalt parking lot for years. Last fall, New York’s fourth-largest city brought that river to the surface for the first time in nearly a century, revitalizing the industrial center’s downtown by using water as a centerpiece.

For nearly one hundred years, New York’s fourth largest city sat on top of a hidden river. The Saw Mill, or Nepperhan (“rapid little water,” its original Native American name), rose and fell with the seasons beneath a crowded parking lot in downtown Yonkers. Tiny fish struggled to carry on the cycles of life in its darkened waters, even as a bustling city above wrestled its way through a whipsaw economy.

The river ran through the center of town, and had played a central role in its history—as early as the 1600s, it inspired the mills and industries that powered the town’s expansion. But by the early 2000s, the Saw Mill had not been seen in downtown Yonkers in living memory. Then a few imaginative residents had the idea that if the city could bring new life to the river, the river could help sustain the city.

Paul Summerfield, Yonkers’ city engineer, says that by the 1920s, industry and population growth had turned the river into “an open sewer.” In 1925, a half-mile long stretch was conveniently put away, buried in a steel and concrete archway, or flume, about 10 feet high and 20 feet wide.

Since then, the once prosperous carpet mills that worked the river have faded away, and businesses such as the famous Otis Elevator Company have vanished. By a couple of years ago, in the place of the energetic Saw Mill River, there was little more than the well-worn parking lot for the Westchester Branch office of the New York Department of Motor Vehicles.

“There wasn’t much to look at,” says Brad Tito, the city’s environmental and sustainability manager, describing the neighborhood streetscape. “You would never know there was a river underneath your feet.”

With Manhattan only minutes away by rail, and the competitive city-eat-city scramble for residents, business and visitors in the New York metropolitan region going at full swing, “not much to look at” wouldn’t do.

“Something needed to move for Yonkers,” says Ann-Marie Mitroff, director of river programs for the nonprofit Groundwork Hudson Valley, a group that advocates for the ecological health of the Hudson River and its tributaries (the Saw Mill among them) and the communities surrounding it.

Around 2005, Groundwork enlisted Columbia University design students and others to do “some early” drawings of what the river might look like if it could be brought to the surface, or “daylighted,” Mitroff says. And those preliminary ideas started people talking about the possibilities.

The U.S. Army Corps of Engineers and other agencies, along with former New York Gov. George Pataki, lent their support to the idea. Eventually, advocates for the river cobbled together funding from a variety of budgets ranging from parks to clean water initiatives, to get the project rolling. And imagination took hold.

Mitroff says ideas for the future river and the proposed park came in from all quarters during a series of community charrettes. Her group then brought in experts in fish habitat to help protect and restore native species in the waterway, working into the plan features such as fish ladders and carefully designed fish passages.

The final plan, which got underway in 2010, routes the Saw Mill through 800 feet of restored bucolic riverscape. When it is complete, the surrounding park will include a 1,000-seat amphitheater and accommodations for the arts, community organizations, public markets and other activities, along with quiet spaces where visitors can contemplate nature, right in the city center. 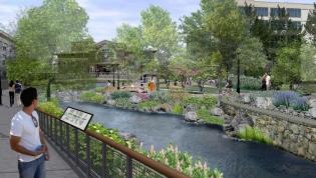 Last fall, engineers opened up the flume and delivered the Saw Mill into the freshly reconstructed riverbed—and into the daylight for the first time in nearly a century.

While cities such as San Antonio, Texas and Providence, Rhode Island have leveraged the Venetian-style canal motif to inspire waterfront revivals in their city centers, Summerfield says what makes the Saw Mill restoration unique is its natural feel. “It’s a real river, with different features,” he says. “The water is calm when it comes out of the flume, then it drops a little, and then runs over some riffles, and then it goes down a waterfall.”

“It’s amazing to see the park take shape as a full-blown ecological and habitat restoration in the center of one of the most densely settled cities in the U.S.,” says Tito. Native species such as the American Eel will once again be able to migrate through (an epic feat in which baby eels trek from the Sargasso Sea in the tropics all the way to the tiny creeks and lakes of the northeast seaboard to mature).

And even before the natural flora and fauna began its comeback, the project was sending ripples through the city. As soon as the job got underway, Summerfield sensed a new vibe in the neighborhood. There was a lot of concern when the city took the parking lot away to dig the new channel, he says, but nearby streets soon became busier, simply “because people started parking there, and you started to get more foot traffic,” he says. “The look of Main Street improved, just because you had more people and there was more activity.”

Tito is among those who thinks the newly daylighted Saw Mill will soon begin to attract new dining spots, development and commerce to the heart of Yonkers: “Who wouldn’t want an office overlooking a beautifully restored open space with water flowing through downtown?”

A New Commitment to Public Housing in San Antonio

Rhode Island Safe Injection Law Is a U.S. First, But Challenges Lie Ahead

How the Cuyahoga River Got Its Otters Back