June Williamson is a professor of architecture at the City College of New York and co-author of Retrofitting Suburbia. This piece originally appeared as a guest post on Lab|log.

Shuttered shopping malls, foreclosed homes and businesses, and hours spent in traffic speak to the failures of the North American suburban growth machine, fueled since the mid-twentieth century by the seductive thrills and excesses of a culture of mass consumption and easy disposal. We have embraced the necessity of recycling discarded goods and consumer waste. Can we scale up to an ethical stance that demands the robust retrofitting of our vast urban and suburban landscapes of consumption?

How might designers and planners assist in this conceptual shift—desperately needed in so many communities—to a renewed culture and politics of production and reuse?

One way is to demonstrate the potential for repurposing buildings and urban infrastructure for productive uses: For vocational training, localized food production and processing, renewable energy R&D, affordable housing near mass transit and the creation of public spaces for social connection, services and exchange.

In recent years my time has been spent researching case studies of suburban retrofitting: The reinhabitation, redevelopment and regreening of vacant malls, strip centers, big-box stores, office parks and garden apartment complexes. Successful retrofits typically involve the introduction of a synergistic mix of uses within an urban-design framework that promotes walking and supports mass transit. But these uses are often limited to a “live, work and play” redevelopment model imbued with assumptions about white-collar workplaces and shopping-as-leisure, eliding thorny issues of class and race, as well as ecology—all vitally important to maintaining an equitable, robust democracy.

Speculating about other uses—more ecologically, socially and economically productive uses—that might be adapted to the emergent suburban-retrofitting paradigm, I teamed up with landscape architect Anne Vaterlaus, and we began to research an intriguing site in the east Los Angeles “ethnoburb” of Pico Rivera.

The pico rivera is on Washington Boulevard, between Rosemead and Paramount, adjacent to the Rio Hondo, a tributary of the Los Angeles River. Its complex history of successive reuse and redevelopment closely tracks the shifting economies of the region: From agricultural fields (now mostly erased in the valley) to Fordist mass production (clunky Edsel and Crown Victoria sedans were churned out in a Ford plant there from 1957 to 1980, with <a data-cke-saved-href=” http:=”” news.google.com=”” newspapers=”“>1,700 jobs lost when it closed), to the military-industrial complex of the Cold War (the B-2 Spirit stealth bomber was primarily engineered and built there between 1982 and 2000), and, since 2003, to the truck-serviced warehousing and high-volume retailing of imported goods.

This latest configuration, Pico Rivera Towne Center, was a subsidized “magic bullet” project that was cynically (or naively) conceived to fill municipal coffers with sales tax income while providing mostly low-wage jobs. It is now—predictably, perhaps—failing. 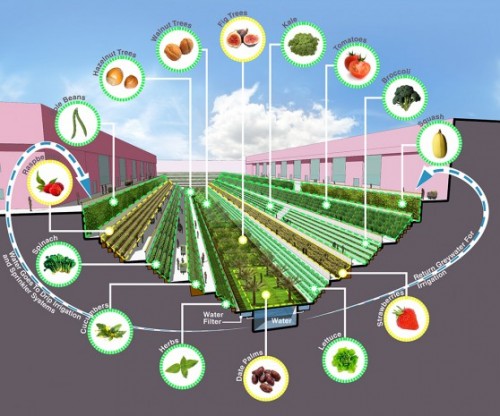 We considered how this site might be retrofitted once again, with more resiliency, by introducing a retooled model based on production, designed around training, employing, housing and feeding a local labor force in need of skills and opportunities.

We propose replacing surface parking with transit-served inclusionary infill housing and a day labor station. We propose reusing big-box stores for vocational schools and training programs. We envision reinhabiting the massive warehouse buildings with green, clean energy R&D and local food-processing facilities serviced by spurs to the existing freight rail corridor. We also encourage growing food—vertically, hydroponically and in terraces—within and around the warehouses, as well as expanding self-provisioning through community gardening at the river’s edge.

Have we produced a seductive, beautiful image of smooth urbanism? Or a nostalgic one? We strove actively to avoid both modes of representation. Instead, we hope to offer a fruitful model that suggests aspirations toward equity and fecundity.