The story of Winter Park’s Hannibal Square Community Land Trust sheds light on the complexity of the link between race, property, and the residential experience.

Since joining the Department of History at Rollins College, a small liberal arts college in the city, my teaching and research has evolved to incorporate a consideration of local issues within a broader transnational structure. The story of Winter Park’s Hannibal Square Community Land Trust (HSCLT) sheds light on the complexity of the link between race, property, and the residential experience.

In 1991, concerned with “blighted” areas, Winter Park created a Community Redevelopment Agency (CRA). The CRA’s efforts have opened Hannibal Square, a historic African-American community to development. At the same time, the CRA supports the HSCLT, which has garnered national attention for it effort. Despite the current controversy, the municipality has in fact had inclusive programs promoting neighborhood revitalization since the 1970s. Indeed, from the beginning Winter Park has linked identity to the residential experience. 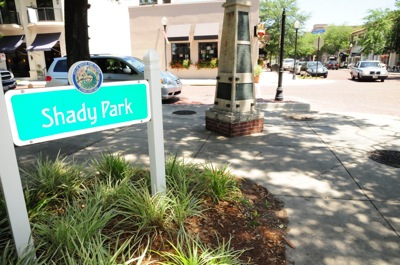 Shady Park sit in the center of Hannibal Square.  The historical marker in the park is one of the few reminders that you are in the midst of the historic black community | photo by Kelsey Von Wormer.

Established in 1887, Winter Park stands today purposefully in contrast to a Central Florida atmosphere defined by the Walt Disney World Resort. A 2010 AARP The Magazine article entitled, “Adventures Afoot from Coast to Coast” urged visitors to explore the “19th century resort town with its elegant houses, historic buildings, museums, lakes, and thousands of live oaks.” However, both perceptions distort the complex history that frames the region.

The first planned community in Central Florida, Winter Park began when Oliver Chapman and Loring Chase developed and advertised the community between 1881 and 1885. Their plan included “lot for Negroes in Hannibal Square” and they embraced an African-Americans workforce that would support the vacation resorts and citrus groves central to their vision. Hannibal Square became the center of a striving community and black agency played a vital role in the town’s incorporation. 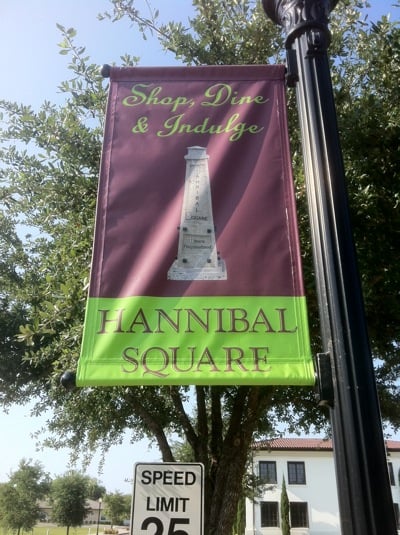 Such cooperation did not last; Hannibal Square was detached from the city in 1893. In an ironic twist, the city annexed Hannibal Square in 1925 when officials realized they needed a larger population to qualify for state funded municipal projects. Despite racial discrimination, Hannibal Square continued to support community and provide opportunity for African-American residents.

In the aftermath of mid-century desegregation efforts, Hannibal Square, like many African-American communities struggled as property value lagged behind the rest of the city. The contemporary revitalization efforts come as developers, unable to cheaply build in predominately white areas, look to extend Winter Park’s elegant consumptive aesthetic of upscale boutiques, restaurants, and condos into the comparatively cheaper Hannibal Square community. 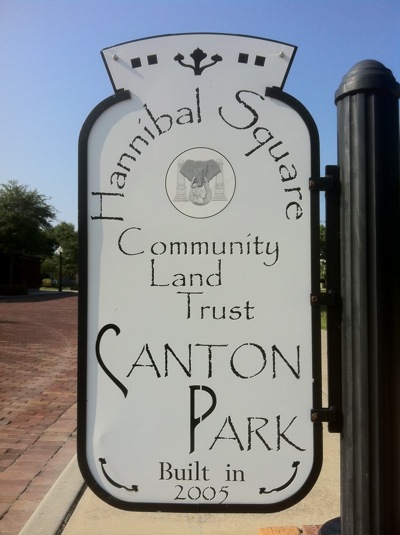 With fewer than 200 CLTs nationwide, Winter Park’s HSCLT represent a unique prospect for teaching and research into urban development. Over the last three years, I have integrated HSCLT into class projects while also serving on the organization’s advisory board. Recently, as part of the Rollins College Student-Faculty Collaborative Scholarship Program, Allison England, my collaborator and I began a research project exploring the HSCLT experience. Our research demonstrates how an intersection of history, culture, and policy challenge the HSCLT’s mission.

Established with the intention of maintaining Hannibal Square’s residential character, the HSCLT’s operating philosophy contests the property holding identity of the community. In addition, as a development body the HSCLT’s goal of promoting the entry of low and moderate-income individuals into the housing market struggles in the face of private developers challenges and municipal government expectations. Developers continue to push for changes to city codes to allow for business development, even as residents hope to maintain the neighborhood’s residential character. In the midst of a prolonged economic downturn, financial support for housing programs is under scrutiny as a cash strapped government seeks ways to promote support revenue generating investment.

It is clear that the future success of the HSCLT is intimately connected to how the organization will evolve to adjust to the new realities redefining the residential experience in the new millennium.

Julian Chambliss is associate professor of history and coordinator of the Africa and African-American Studies Program at Rollins College in Winter Park, FL. His teaching and research areas focus on urban history and culture in the United States.

For Kashmir’s Local Artisans, a ‘Craft Safari’ Offers a Lifeline

City Leaders Look to Prisoners for Answers to Violence

Putting Disabilities at the Center of Impact Investing