The latest master plan for development recognizes that if Atlantic City is to survive, it must attract more than gamblers. However, no non-gaming project since gambling was legalized in 1976 has been profitable without government funds.

A massive white sphere resembling a golf ball sits atop the newly built Revel casino, arousing the curiosity of anyone who sees it. When asked, company officials were coy, saying only that it would be used to represent their brand and that it would not roll off the top of the building. But people may have to wait for Revel’s grand opening Memorial Day weekend to see just what the ball will do.

They aren’t the only ones watching Revel. Investors are anxiously waiting to see how the casino, will fare — because most say as goes Revel, so goes Atlantic City. The gambling mecca is trying to reinvent itself as a seaside resort, and developer Revel Entertainment Group LLC’s $2.4-billion project, Atlantic City’s first new casino in nine years, is widely viewed as the barometer of whether that concept will work.

Aside from 150,000 square feet of casino space, Revel has 1,800 hotel rooms, three theaters, including a 5,500-seat concert hall, 14 restaurants, six pools and two acres of landscaped outdoor decks. Investors want to see whether Revel attracts a new breed of tourist to Atlantic City or whether it simply siphons off business from the existing casinos. With gambling now available throughout the Northeast, Atlantic City needs to attract people other than gamblers if it is going to survive.

The roadmap for the city’s makeover is the Casino Reinvestment Development Authority’s master plan, unveiled Feb. 1, a year to the day Gov. Chris Christie signed landmark legislation designed to revitalize the city.

With help from Chicago-based Jones Lang LaSalle, the urban planning firm Jerde Partnership, the engineering firm Birdsall Services Group, and the law firm Hill Wallack, the state-run CRDA put together a 300-page plan that spelled out redevelopment options for the so-called Tourism District — a 1,700-acre area encompassing the casinos, the boardwalk, shopping and dining districts, and Bader Field. Christie is giving the resort five years to gain its feet before reconsidering whether to expand casino gambling to the Meadowlands and other parts of New Jersey.

The plan contained short- , medium- and long-term goals. Among the short-term: To have light and sound attractions along the two-and-a-half mile Boardwalk. The designers envision up to 10 “Innovation Pavilions” sponsored by private companies that would have entertainment and educational components. Interactive wind sculptures will run along the beach.

If the planners have their way, even the casino parking garages will be revamped to include some open space — for cafes and stores. The sky bridges leading to the casinos will offer more sky, and the bandshell will be expanded and art and music festivals will be held year round.

Atlantic and Pacific Avenues , which run parallel to the Boardwalk, will be given a make-over; the blighted facades addressed by a variety of means, some legal, some by asking the owners to get involved in the reclamation. Street furniture will be installed, as well as hexagonal pavers. Fountains will be added, along with other “water features.”

Pacific, one street over from the Boardwalk, will be more pedestrian-friendly, while Atlantic Avenue, the next street, will be turned into a Main Street of sorts for tourists. Atlantic will also have a “small business incubator” to support local business.

Lighthouse Park will be expanded to encompass the South Inlet. A Gardner’s Basin development will have a wildlife research facility and marine technology center, as well as a working “Fisherman’s Village.” And Bader Field, the 143-acre site of the former municipal airport, will be turned into a mixed-use commercial and residential area. 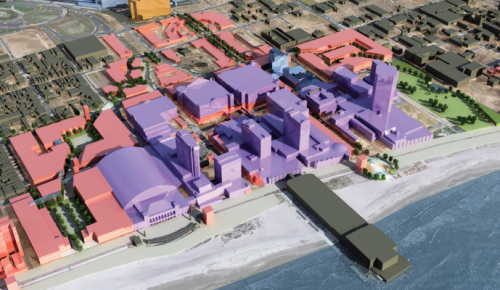 Screenshot from the master plan.

The plan received unanimous support from the CRDA’s 15-member board, including Atlantic City Mayor Lorenzo Langford, who in the past has been critical of the state’s takeover of Atlantic City’s tourism district.

Some questioned the master plan process. Typically, a draft of the plan is put out to stakeholders and the public, who can then make comments. Those comments are considered in the final draft. In Atlantic City, the plan was adopted first and then put out for comment. Copies weren’t even available until after it was adopted.

Critics also question how some of the proposals will be implemented. The city has had five or six master plans since gambling was legalized in 1976, and much of what was suggested was never done. They fear this plan will be more of the same if money isn’t put behind some of the goals, such as improving the casino parking lots and cleaning up blighted facades.

“I would liked to have seen immediate plans to throw money behind demolition and removal of blight, and maybe some incentive programs, to actually get people in here to start building,” said Damon Tyner, an attorney in Atlantic City who recently ran unsuccessfully as a Democrat for state assembly.

While New Jersey already offers tax incentives to developers on $50 million projects that create at least 200 jobs, Sen. Jim Whelan (D-Atlantic) has sponsored a bill that would extend those incentives to non-gaming projects within Atlantic City’s tourism zone. The bill would give developers of such projects a $20-million credit against their state income taxes over 10 years if the project costs at least $20 million and creates at least 100 jobs.

“You’ve got to get [investors] in there immediately. Unfortunately, all the buzz I’m hearing from folks on Wall Street is that they’re just not really interested,” Tyner said. “It’s always disappointing, living here and understanding the potential, and then seeing that the folks that write the checks are just not coming.”

It doesn’t help that not one non-gaming project, since the city adopted gaming — from residential projects to the shopping outlet district in the center of town known as the Walk — has been profitable without hefty government subsidies, sources said.

One of the primary issues, for non-gaming projects like real estate, is the city’s high property taxes. With its proximity to the ocean and its great restaurants and entertainment, Atlantic City would be an ideal place for tri-state area residents to have a second home, but high property taxes make it cost prohibitive, said Tom Scannapieco, president of Scannapieco Development Corp., based in New Hope, PA.

Scannapieco, whose company built the Sheraton Atlantic City Convention Center Hotel, as well as the Bella Condomiums next to Revel and townhouses on the Northeast Inlet, said the current economic climate has investors skittish everywhere. But casino revenues falling 6 percent to 8 percent a year give the impression that Atlantic City is a city on the decline. That’s unfortunate, because it has a ton of potential, he says. But property taxes are the No. 1 hurdle.

“I will tell you flat out that nothing will be done in the city non-casino wise. No development will go forward in the city unless they are able to put in a very significant tax abatement program like they have in Philadelphia,” he said.

Philadelphia has a tax abatement program that gives hefty tax holidays over a 10-year period. Scannapieco said he currently has a condo project in Center City, Philadelphia, where the property taxes on a $7 million condo would be about $1,800 a year for the first 10 years. A similar condo in Atlantic City would have an annual tax bill of $140,000, he said.

“Atlantic City is not a market that can command that kind of tax payment today, for a second home, and because of that, it has been passed over as an opportunity for second home development.” 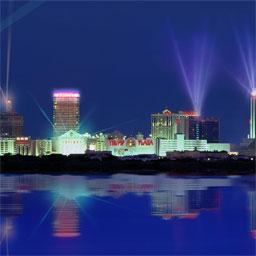 Proponents of the plan say this time may be different because there’s finally a consensus to turn Atlantic City around. The plan has the backing of the governor’s office, the city, and there is now an agency whose clear mission it is to implement the goals in the plan, said Cory Morowitz, a gaming industry analyst. That said, economics will ultimately dictate whether the plan succeeds, he said.

“Investor money is drawn in by the market opportunity. So if Revel is successful, and the gaming industry stabilizes in Atlantic City, and if the general economic conditions get better, then investor money will flow,” Morowitz said.

Consensus, tax incentives, and leadership are all good tools to help facilitate investment, but investors are driven mostly – or entirely — by returns on investment.

“I don’t think things like tax incentives are a major driver of investment decisions,” Morowitz said. “Ultimately, it’s going to depend on a few things: The market has to evolve beyond gaming, which it is, and the economy has to get better. And the leadership has to be consistent and maintain the course it’s on.”

Tom Ballance, senior vice president of administration for the Borgata Hotel, contests the notion that the master plan is good on paper but difficult to implement. The plan spells out short-term goals like boardwalk and façade improvements, which are easy to do and don’t require a lot of capital, and yet they increase the appeal of the city, thereby attracting the tourists and investors needed to achieve the longer-term goals.

“As with any urban redevelopment, you need to get momentum,” said Ballance. “Those early projects are designed to build that momentum.”

Ballance is also a trustee on the Atlantic City Alliance, an agency whose goal it is to build that momentum by marketing the city. The ACA has a budget of $30 million a year, money the casino industry used to pay to the ailing horse-racing industry so that it could offer more lucrative purses. For the next five years, that money will remain in Atlantic City.

If you make Atlantic City attractive, people will definitely come, said Jack Plackter, a real estate lawyer with Fox Rothschild in Atlantic City. Borgata has shown that, and Revel, when it opens, will show that, he said.

“Atlantic City is only 48 blocks long. You can fix this place one block at a time,” Plackter said. “The issue is can it be done quickly enough. We don’t have a huge window. We don’t have 20 years.”