This weekend I attended a University of Pennsylvaia Institute for Urban Research conference called “The Shape of the New American City.” It started with academics and city employees quietly discussing new research on urban density and market trends. It drew to a close with Chris Matthews fielding a sea of energetic questions about Sarah Palin and Joe Six-Pack. Here, I try to figure out what it all means.

Late Saturday morning the UPenn Institute for Urban Research’s “Shape of the New American City” conference ended with a huge round of applause. It was for MSNBC Hardball’s Chris Matthews, clearly. Matthews had, moments earlier, answered the conference’s final question, from an audience full of visitors from UPenn’s parents’ weekend who happened to be passing by. A middle-aged woman asked, “I saw a show on cable news about voter fraud. On the show it looked pretty real. Is it real?” 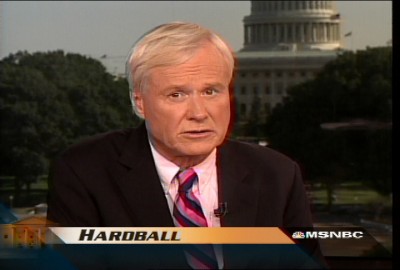 Chris Matthews: the man, the myth, the urban planning expert

If you’re wondering what any of that had to do with American cities, you’re not alone. As far as I can tell it had nothing to do with cities. But maybe, also, everything.

That final question was a strange kind of set piece for the entire conference. One day earlier, in a slightly smaller conference room on the UPenn campus, the event took the shape of shoptalk between academics and working city planners; the social scientists and economists presented recent papers and the data from new studies about large topics — immigration, urban sprawl, real-estate markets — and, invariably the questions from the audience were, from the professionals, How does this apply to my city? What does this mean for Fort Collins? How does your new understanding of global trade affect Wilmington, Del.? More pointedly, one attendee asked an urban economist from Princeton What, in this study, do you consider “a city?”

This tension between the general and specific, the global and the local, defined the conference. Everywhere, as in my initial report about Saskia Sassen, the reminder was that of the standard social science caution: grand predictions and theories for the future won’t work, and an accurate picture of the condition of cities could only be addressed by digging into the nitty-gritty nuts-and-bolts of urban communities, taken on their own terms. The professional city planners in the audience echoed this in their questions, and yet they acknowledged something much larger by the fact that they weren’t the ones on the stage. It was still the academics with the grandest ideas that stole the show. In fact, as mentioned in my earlier report, it was the most global of the academics, those with the farthest reach and presenting fantastical tales of the Orient and the Near East and the shape of the globe-on-whole who were the real stars. Trafficking in big ideas proved more exciting than worrying about refitting sewer pipes in Ann Arbor.

In that respect this final scene, Chris Matthews effortlessly holding court beneath a graphic of a generic skyline on a vinyl sign that read “The Shape of the New American City,” was fitting. Under the banner of cities, generally — the idea of cities — sat an icon of national politics and national media, and he was much more exciting than anything else the conference had seen. In his (huge) head we saw everyone’s favorite big idea, the nation, and it held our attention much more than Friday’s measly little topics.

Everything he said evidenced the excitement that surrounds the national discourse — his talk of presidents, the economy, the discourse of “real America”— and the audience’s frenzied reactions made it all undeniable: it’s easier to get people energized about America than Scranton. There is really no competing. In the few instances where Matthews attempted to address the prescribed topic of cities, he was, backhandedly, giving direct voice to problem of theorizing cities in the midst of a huge nation. He mentioned how, even though 83% of Americans live in urban areas and their immediate suburbs, elections don’t mention them. The battleground was with rural and exurban voters, and this geographically huge target has been proven very effective in national campaigns. The context of “the nation,” of “America,” it turns out, can move great blocks of voters together without much so binding them into an interest group as a vague notion that they belong to a place, powerful and huge, that the naked eye could never hope to see; conversely it forces the cities to become “The City” and this is a harder pill for New Yorkers, Atlantans, Dallasans, and Los Angelinos to collectively swallow.

As Matthews noted, this phenomenon is evidenced by very recent, and very blatant, appeals by presidential candidates to the “real America” of suburbs and small towns, and the all-encompassing mascots for those places: Joe the Plumber née Six Pack. Those without cities seem to bleed into the great idea of the nation more easily than those who already have more speciifc allegiances, you can be Joe the Plumber outside Missoula, Mont. as easily as you can be 50 miles outside of Birmingham. Joe Tech Startup, on the other hand, doesn’t hold much sway outside of Silicon Valley. Joe Deep Dish Pizza Salesman doesn’t get a lot of traction beyond Chicago’s city limits. Maybe the persona of Joe Non-profit Urban Economic Stimulation project could find willing animators in cities across the country, but they probably have better things to do right now. Besides, national discourse got pretty close to that with the introduction of The Community Organizer, and he was summarily laughed off the stage.

Cities are specific places, with specific problems and specific needs, and in an age and culture where they have to share the space of media platforms with the generalized needs of nations, these localized specifics are, understandably, drown out. That was the lesson illustrated all too clearly by this conference’s final presentation.

The panel on which Matthews sat — beside Howard Fineman, and sandwiched between two silent academics and two equally silent editors from the UPenn student newspaper — was moderated by Phyllis Kaniss. Kaniss is one of the few academics to tackle the topic of local political media in America and, sadly, one of the few academics who has tackled local politics in America at all. While her presence seemed like a great opportunity to look at some of these issues, to address the elements of the national political discourse that definitively exclude dialogue about urban issues, Kannis stepped aside. As the event ended, and the conference drew to a close amid clapping, laughter and excitement not seen anywhere in its preceding sessions, I thought that she may have been smart to do so.