You wanna know who lives 20,000 miles below The Jetsons? Communists.
Not really, but it’s a fair guess. Conceptual artists in the Cuban Missile Crisis days had to contribute some sort of vision for the future of humanity. Hiding under drafting tables…

You wanna know who lives 20,000 miles below The Jetsons? Communists.

Not really, but it’s a fair guess. Conceptual artists in the Cuban Missile Crisis days had to contribute some sort of vision for the future of humanity. Hiding under drafting tables in a dark Hanna-Barbera sweatbox, grinding out another air raid drill, cursing at Jack Kennedy… heck, it would make anyone want to live in the stratosphere with a talking dog. Since there’s no official backstory to The Jetsons, it leaves plenty of room for the adolescent imagination. But really, what were they doing up there? And why is everyone living in the Seattle Space Needle?

You get a great view of the ICBMs flying by at night!
—image courtesy of Wikipedia Commons

In the late 50s and early 60s, America was looking towards the future … more specifically, the moon. Beating the Russians to the twirling rock was a matter of destiny. We prepared for our new life in space by swanking up highway motels, coffee shops, bowling alleys and airports. High society magazines sold cigarettes by showing Frank Sinatra flicking them off the porch of his multi-level steel box home on Hollywood Hills. There are many names for this style of retro-futuristic environment dress and all are children of Mr. Art Deco and the curves of Cadillac cars. The Jetson’s luxury flat was actually inspired by Pan-Am and Los Angeles Airport’s Theme Building.


The term “Raygun Gothic” was coined by author William Gibson in his story, The Gernsback Continuum. The story centers on a photographer who is able to communicate with an alternate reality based on his images of futuristic furniture. It was a postmodern echo of the American way — how our utopian visions of the future are based on material possessions. Raygun Gothic is architectural indulgence. Single-support beams, acute angles, brightly colored paneling, shapes and cutouts showing motion (like boomerangs and arrows) are all characteristics of the golden age of modern design.


But as America landed on the moon and discovered dust, more dust and that Alan Shepard could drive a golf ball 25,000 miles with a 3-iron, our dreams of Judy Jetson fell apart. Tailfins rusted, the starlite neon of space-age bachelor pads fizzled out and America went to Vietnam, where the future wasn’t so blue and pink. The generational divide became embodied in lava lamps and geometric steel structures like The Sears Tower. It was getting late and communism couldn’t play wiffleball anymore. A tired America gave into beards, crime and the color brown. Look up 1976 and see for yourself — everything is ugly. 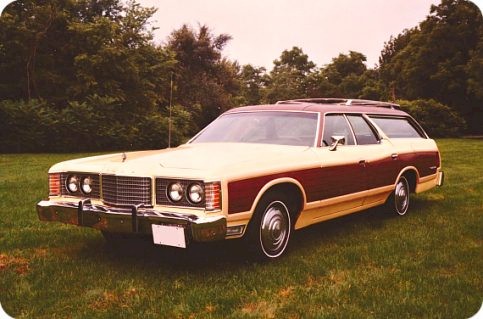 Remembering our failures: this station wagon asks us, “Mars? What were you thinking?!”
—photo courtesy of Stationwagon.com


Which brings us to the point: unrealistic optimism and visions of utopia eventually rust. Utopia is a terrible dream. It is a place set in its ways and leaves no room for improvement. Learn from the short history of our culture: there was a time when America thought it could colonize the galaxy. We’d all work three hours a day at Spacely Sprockets, come home to a beautiful wife and a robot maid, eat our dinners in pill form and wake up the next morning at the end of a conveyor belt. Today, a new utopia is forming in a young megalomaniac’s daydream. Our showers will look like iPod minis, breakfast will be served via bluetooth, everything will be white, all floors will be wood-paneling, everyone will wear mock-turtlenecks, we will dance in the shadows of our connected universe … all hail Justin Long!