A more thorough look at the economic promises and community protests that make up the saga of the Barclays Center, which opened on Friday after nine years of discussion and debate. 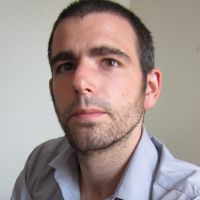 After a “tour of displacement” around Brooklyn, about 125 protestors descended on the newly opened Barclays Center. Credit: Dan Rosenblum

Around 17 of the jobs pledged for the newly opened Barclays Center in Brooklyn materialized late Saturday afternoon in the form of arena employees in maroon vests and grey ties, blocking protestors from the entrance.

The stadium, featuring 18,200 seats for the rechristened Brooklyn Nets basketball team, is the first phase of the sprawling Atlantic Yards development that is to feature 16 other buildings on the site. As the controversial 675,000-square-foot arena opened with the second of eight sold-out Jay-Z concerts, neighborhood activists marched to the newly opened arena saying the developers rushed ahead with what they wanted while brushing aside the less sleek — and less profitable — components of the project, like affordable housing and local jobs.

After a “tour of displacement” amid gentrifying storefronts and condo high-rises of Downtown Brooklyn, approximately 125 protesters led by Families United for Racial and Economic Equality (FUREE), a housing-focused community group made up largely of women of color, descended on the arena.

“I feel it was a con game played by a few people against the people of Brooklyn,” said FUREE board member Beverly Corbin in front of the mesh of fashionably rusted steel and LED screens.

The community has been divided since 2003, when developer Forest City Ratner first proposed building the 22-acre site in this congested part of Brooklyn. While the city and state pledged more than $300 million in subsidies and tax breaks for the arena, some residents and activists protested and filed lawsuits against evictions, lack of community input and condemning the so-called ‘land-grab’.

One longtime critic of the project, New York City Councilmember Letitia James, briefly stopped by during the tour to thank marchers for “not drinking the Kool-Aid” in support of Barclays Center.

It’s a community that has gotten richer in recent years, but still has lingering pockets of deep poverty. Though median household incomes in neighboring Park Slope and Prospect Heights are around $80,000, the nearby census tract that includes the Raymond V. Ingersoll and Walt Whitman housing projects make up the second-poorest in New York City, with a median household income of $9,000.

Some community incentives were offered in a 2005 Community Benefits Agreement signed by Ratner and community organizations. In it, half of the 4,500 rentals were promised to low-to-middle income tenants, with the rest at market-rate prices.

Since then, supporters and opponents have gotten used to a whittled-down vision. An early arena design by Frank Gehry was cancelled for a more subdued and cheaper version by SHoP Architects. Timelines for the prefabricated housing were pushed back. Most recently, during the arena’s September ribbon-cutting, Bruce Ratner told reporters that the first apartment building would break ground in December, with half of the 32-story building’s 363 units allotted for affordable apartments. But while the building meets the demands of CBA on its face, the specifics veer from the original vision with only nine of the two-bedroom reserved for families earning incomes below $35,856, while the rest of the promised affordable units will be geared to middle-class families, with rents more than $2,700 a month, watchdog journalist and blogger Norman Oder of the Atlantic Yards Report blog reported in an article for Brooklyn Bureau.

“When I first heard about it, I was a Nets fan, so I was psyched about it,” said FUREE board member Alvin Bartolomey, 25, of Red Hook. “But as I got more politically understanding of things, to me, there’s no benefit at all.”

Bartolomey said housing would take too long to appear and may not matter in a city that changes so quickly. He added by the time housing is completed and all the jobs are filled, he might not even live in New York. “They’re gonna break the promise, they don’t care because they don’t believe that we’re gonna remember 10 years down the line the promise that they made.”

State Assemblyman Joseph Lentol, who represents part of the Fort Greene neighborhood north of the arena, said he sympathized with residents’ need for low-priced housing.

“I feel their pain because I’d like to see it happen overnight,” he said. “But, you know, nobody could have predicted what would happen in 2008 and how the economy would turn so badly, especially for expansive projects like this and the inability for them to go forward.”

Lentol, a supporter of the project, is still buoyant about the promises made in the CBA. “At least we have one piece of the puzzle and I know that Mr. Ratner will make good.”

Called Friday at his office, James Caldwell of BUILD, the organization funded by Forest City Ratner to advance affordable housing, could not be reached for comment.

The CBA also stipulated workforce development and job training programs that would give Brooklynites a chance to learn construction skills, but a handful of former supporters are suing Forest City Ratner saying that the courses more closely resembled free labor with no jobs at the end of the apprenticeships.

Operators of the arena plan to fill around 2,000 jobs to work the Barclays Center, many of which are part-time. In April, a Forest City Ratner spokesperson told Norman Oder that this translates to 1,240 full-time equivalent jobs at the arena.

Another of those eight CNA signees was the Downtown Brooklyn Neighborhood Alliance (DBNA), working on healthcare initiatives and funded with $50,000 from Ratner. DBNA founder Rev. Herbert Daughtry blamed many delays on legal battles from opponents.

“They blocked the project from happening,” Daughtry said when reached by phone. ”It’s almost like people standing in the middle of the street blocking traffic and then complaining there’s no traffic, no buses were able to get down the road.”

Along with a meditation room in the arena, DBNA offers 54 free tickets to people from the surrounding neighborhood as well as a 12-person suite. What hasn’t materialized yet is a community health clinic expected in the next phase. Daughtry credited a “cordial” relationship with Ratner for the optimism he’s held onto since the early days. Still, he acknowledged that part of his job was to make sure the promised benefits arrive.

“I’m not like the man who fell from a hundred-story building and when he hit the 50th floor, he said ‘well, so far, so good’,” Daughtry said. “I mean I’m not that kind of optimistic.”

Along with Corbin, other speakers on Saturday included opponents like gadfly Daniel Goldstein, whose home was bought out to make way for the development. He and other holdouts from Develop Don’t Destroy Brooklyn held signs condemning the arena.

As the remnants dissipated into the neighborhoods, they mixed in with fans wearing shirts with branded with the Nets logo and slogans of Brooklyn pride. Vendors nearby hawked incense and water while passersby posed for photos under the overhanging roof surrounding the oculus. By 6:45pm, many of the red-vested employees had disappeared inside and hundreds of concertgoers were lined up at the entrance.

Dan Rosenblum is a New York-area writer. He graduated from the CUNY Graduate School of Journalism and has contributed to City Limits, Capital New York, Jersey Journal and other publications. Only half of those who follow him on Twitter are Spam bots.

In Brooklyn, America’s Gentrification Epicenter, Building On A Model For Community Care

Can Cities Be Saved From ‘Supergentrification’? Aspen May Offer a Roadmap

The Atlanta BeltLine Wants to Prevent Displacement of Longtime Residents. Is it Too Late?