The Angel Island Immigration Station has sometimes been referred to as the “Ellis Island of the West.” But it has a more complex history than its East Coast counterpart, which was a symbol of welcome to immigrants from all over.

Earlier this month New York Governor Andrew Cuomo declared that New York State would suspend its participation in “Secure Communities” because it unfairly attacks immigrants. It is well known that immigrants have been imprisoned in lower Manhattan, often for minor infractions. The detention of immigrants continues to be a hot-button issue, with the Obama administration having promised an overhaul of the country’s often substandard detention facilities after deaths, abuse, and inadequate medical care in the system came to light. A historic example of the fear and racism that accompanies immigration in this country, has, amazingly enough, been recently memorialized in the middle of San Francisco Bay.

The Angel Island Immigration Station has sometimes been referred to as the “Ellis Island of the West.” But it has a more complex history than its East Coast counterpart, which was a symbol of welcome to immigrants from all over. First operational in 1910, the Angel Island detention station controlled the flow of Chinese immigrants into the country in enforcement of the Chinese Exclusion Act of 1882. Over the next thirty years, the station served as the point of entry for approximately 175,000 Chinese, as well as immigrants from other countries. Some were detained for a year or more. 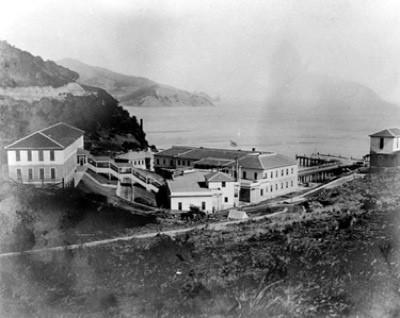 
The Angel Island station—reopened to the public after more than three years of restoration and preservation work—affords a valuable glimpse into the sometimes dark history of immigration—as well as the poetic testimonies that detainees left behind on its walls in response to their suffering.

That history was almost erased. The former administrative building burned down in 1940, and the station was abandoned. In 1941, the station became the north garrison of Fort McDowell, and the old detention barracks served as a prisoner of war processing center during World War II. Following the war, the station was again abandoned, and the buildings suffered neglect, vandalism, and decay. The California State Parks slated them for demolition in 1970.

First to go were the pier and wharf and what remained of the administration building. Staff cottages were deliberately burned during the filming of a fire scene in the Robert Redford movie The Candidate. As was discovered much later, these cottages had been designed by architect Julia Morgan, one of her earliest commissions—as it happened, she was sister-in-law to the commissioner of immigration at the time.

Only the detention barracks, the hospital building, and the powerhouse remained. Right before the barracks were to be demolished, a park ranger took a last walkthrough and saw carving on the walls. A student at San Francisco State University, he recognized the writing as Asian and asked a professor of his to see if he could decipher it. The professor brought a photographer and recognized the writing as Chinese poetry. (These poems were later translated and published in a book, Island Poetry and History of Chinese Immigrants on Angel Island, 1910-1940 by Him Mark Lai, Genny Lim, and Judy Yung.) The discovery saved the buildings from destruction and ultimately led to the formation of the Angel Island Immigration Station Foundation, a nonprofit organization that partners with the California State Parks and the National Park Service to preserve the site and educate people about its role in immigration history. The barracks opened to the public in 1983. 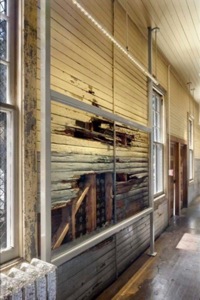 
A number of those involved with the organization had relatives who had come through Angel Island. The foundation originally hired Daniel Quan, principal of Daniel Quan Design, to create a travelling exhibit about the island and the immigration station. “I got interested because my father was a detainee,” says Quan. “He came in 1926 from Canton, a farming region in southern China.” Quan ended up on the board of directors and then served as the foundation’s president, helping to launch a national campaign. The station attained National Historic Landmark status in 1997.

Another board member, Doug Tom, principal of local architecture firm Tom Eliot Fisch, became involved in 1999—but was unaware for many years of his own family’s connection to the island. “I found out only within the last three years that my maternal grandparents came through this station,” he says. “I didn’t think to ask. And for most detainees, their time here was a taboo subject all of their lives. It was not something they talked about.” 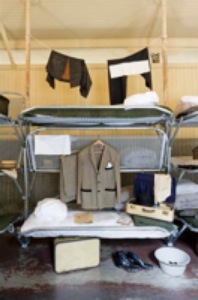 
In the mid-1990s, the foundation hired local architecture firm Architectural Resources Group to work with Quan on conducting a detailed investigation of the poems and create historic structure reports and reuse guidelines for the three existing buildings, the hospital, the barracks, and the powerhouse. The site was not in good shape—it had been overplanted with eucalyptus, which sucked all the water out of the ground. “There had been a lot of degradation of the stability of the slopes,” says Aaron Hyland, a managing principal at ARG. “When we came in, people thought that the whole hospital building was sliding down the hill. Also, water had damaged the walls, which were sagging. But it turned out not to require nearly as much work as was originally thought. As we found out when we did the stabilization, the building’s foundation hadn’t moved—the topping slab had just cracked, and the wall had shifted. And although water had rotted the wood walls, the entire roof structure was in great shape.”

The study of the poems turned up some surprises. “There were far more poems than we thought—double the number that had been previously recorded earlier,” Quan says. “Not all of the poems are easily visible. There are layers of paint, and some are really faint.”

Interestingly, immigration officials attempt to cover over the poetry played a hand in saving it for posterity. “We found correspondence between the superintendent of Angel Island and immigration officials in Washington DC,” says Katherine Petrin, a senior associate at ARG. “The officials were unhappy with the poetry because it was defacing government property and because they thought it was leading to unrest. So on a couple of occasions, they ordered the detainees to stop carving poetry, and they puttied over everything and painted it out. This had the beneficial effect of preserving the carvings in a way that never would’ve happened otherwise. When the putty shrunk, it made the carving even more legible.” 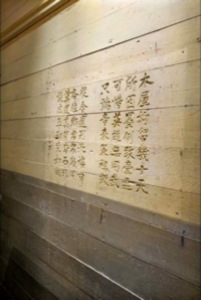 
Today, the foundation gives public tours of the restored detention barracks where the poetry was carved. “We didn’t want to fix the barracks building so that it looked like it was new,” says Quan. “We wanted to give people an experience that resembled what detainees might have had while they were there. So the condition of the walls is pretty much as it was in 1940. We wanted to freeze it in that state. And we put the bunks back in to give visitors an idea of how cramped a space it was with 600 people living there.”

Outside the detention barracks, an open space that follows the footprint of the former administration building exhibits information and documents about the building and its role in the detention station. Future phases will address the hospital and powerhouse.

The Angel Island Immigration Station tells a more complex story than the rosy story of the United States welcoming immigrants with open arms. “There has been a big change in the way that the state parks have told this side of history,” Quan says. “Now they are embracing that idea that there are other stories to be told, and that public parks are really good places to tell them.”