The popular Vélib bike-sharing network in Paris, France, is suffering from theft and vandalism. Will this have an effect on similar programs here in the U.S.?

Last week, Steven Erlanger of the New York Times reported on the dire state of the popular Vélib bike-sharing program in Paris. Of the initial 20,600 rental bikes provided for Parisians, he writes, 80 percent have either been stolen or damaged. Hundreds of mechanics have been hired just to keep up with repairs. Although the program remains extremely popular, it is becoming increasingly hard to find a functioning Vélib bicycle.

What’s the cause? Social revolt, as Erlanger demonstrates. Some Parisians believe that “resentful” and “anarchic” lower-class youth see the Vélib as a symbol of urban middle-class privilege. Confined to public housing in the suburbs, disadvantaged teenagers and young adults, many of whom are immigrants, feel excluded from the desirable trappings of life in the central arrondissements. Their appropriation of the bikes for joyrides and, eventually, abandonment and destruction, is an act of rebellion. While the Vélib program has been a wildly successful alternative form of transportation to those who can afford it, it has also highlighted glaring socio-economic disparities in this European capital. 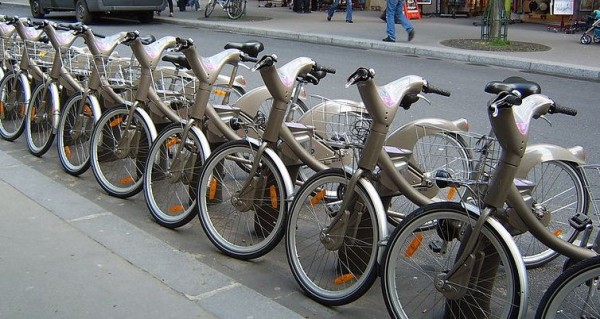 Will these unfortunate realities imperil similar bike-sharing programs here in the United States? American cities obviously have their own share of poverty and social division, but it may just be too soon to know if this will have an effect on bike sharing. Washington D.C.’s SmartBike initiative, the first bike-sharing network in an American city, has so far been a success. Implemented in May of 2008, SmartBike began modestly with 10 racks and 120 bikes, but membership has been growing. There are now plans to expand to 50 racks with about 500 bikes. The district’s program has been mostly free of the theft and vandalism that have plagued the Vélib. But it took time for the rental bikes in Paris to accrue connotations of privilege and spur envy among the poor. The program began in 2007 but only relatively recently has suffered at the hands of those who have been denied access to it. As in Paris, D.C.’s SmartBike racks are located in central, affluent neighborhoods like Dupont Circle and Georgetown, far from disadvantaged areas like the Southeast.

For those American cities that are considering bike-sharing programs but have yet to implement them, lessons might be drawn from the experience in Paris. Bike rental networks have been proposed in New York, Philadelphia, Portland and other cities. But if they hope to avoid theft and vandalism, these programs must make an effort to provide greater security and to be more affordable and accessible to a wider range of the population. Bike-sharing should be available to many; it is a valuable and sustainable form of personal mobility. Hopefully, theft and vandalism won’t be a deterrent to the development of bike rental programs here.