Urban Outfitters sells clothes, and an up-and-coming neighborhood, to fashion-conscious residents of Nashville.

The Urban Outfitters opening in Nashville this Thursday promises to open up a new market for boho-fabulous shoppers and is just one step in an ongoing makeover for an up-and-coming neighborhood, the so-called Gulch. The clothing retailer and the neighborhood’s already-underway redevelopment, which appeal to the same demographic and with the same trendy-chic branding, might just be a match manufactured in urban-consumption heaven. My cynical accusations of contrived individuality aside, this partnership might just offer the needed momentum to jump-start the neighborhood.

For those of you unfamiliar, Urban Outfitters is a popular retail chain that offers shabby-chic apparel as well as quirky accessories, house-wares, and gifts to hipsters and yuppies aged roughly 18 to 30 years. Started in Philadelphia in 1970, this first, lone establishment has since grown into a publicly owned, internationally operated corporation managing five separate retail brands (the original Urban Outfitters name remains one). 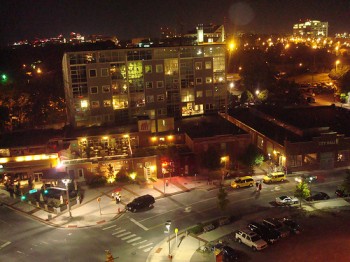 The new store will be the chain’s first in Tennessee, and it will slot in nicely with the rest of the redevelopment plan in the downtown-fringe neighborhood affectionately known as the Gulch. Market Street Enterprises, the group responsible for the redevelopment project, articulates its vision for the Gulch as an “enlivened community” that invites residents to live a “contemporary lifestyle.” (This jives well with Urban Outfitter’s self-description as a “lifestyle specialty” retail company.) With a small contingent of already successful eating establishments as well as a number of recently installed offices, studio apartments, and condominiums, Market Street Enterprises hopes to build on this success to create a neighborhood “uniquely Nashville.”

What exactly is “uniquely Nashville” about a vibrant street life, posh apartments and some decent restaurants is unclear, but Market Street Enterprises and Urban Outfitters, Inc. both seem to recognize the importance of these buzz words to their targeted demographic. “Unique,” “eclectic,” “alternative,” and “bohemian,” are the kind of descriptors that draw in young people with an image to cultivate and money to spend. Despite a PR image that would portray both entities as the ultimate in urban individuality, if anything, their partnerships undermines any of the Gulch’s residual distinctiveness in favor of a homogenized standard of urban “hip.”

All this is not to say that branding—in neighborhoods as in retail—doesn’t have its place. Urban Outfitters’ financial success shows that they’re delivering a product and an image people want, and in a neighborhood trying to remake itself amidst a recession, the store’s cultural clout among target potential residents could mean big things for the Gulch. In many cities, the yellow Urban Outfitters lettering and a window full of grungy mannequins are often a barometer of neighborhood vitality. In the Gulch specifically, where most of the businesses are restaurants or bars, many see retail as a diverse and welcome addition, especially since many of the new residential and office buildings also have street-level storefronts in need of filling.

Economics In Brief: It’s Not That People Don’t Want to Work, It’s That Work Is Broken

Economics in Brief: Walmart Will Pay for College for All Its Employees