South Los Angeles’ Community Coalition employs land use and licensing laws to take on and take down liquor stores and motels that make for bad neighbors. 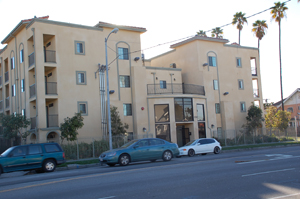 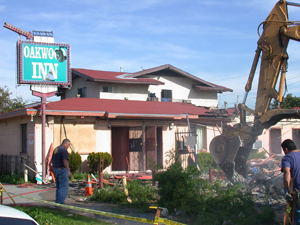 Marqueece Harris-Dawson is telling a story about murder, prostitution, and mental health woes. The same story is also about pressure, power and promise – and about how a city, with a big assist from organized activist neighbors, can use existing land use and licensing laws to affect change.

“There used to be something called the Oakwood Inn,” Harris-Dawson says. He is the Executive Director of the Community Coalition, an 18-year-old social justice organization based in South Los Angeles with some 4,000 members and 34 staffers.

“The city attorney caught the [Oakwood] owner trafficking in prostitution. Basically they were offering a prostitute with a room. And they got him on tape,” Harris-Dawson says. So the city seized and demolished the motel. To celebrate, the Community Coalition held a press conference. “But what was more moving was when we were standing around, people came up to us and said, ‘Hey, my brother is doing life for killing somebody in the room that we’re standing on right now.’ And then like five minutes later, another person would come up and say, ‘My daughter is in a mental health institution now; she started using drugs here.’

“It just seemed like the people never stopped,” Harris-Dawson says. “And these weren’t people who were part of the press conference or part of the organization. These were people who were just driving by and they stopped, or riding their bike by, or walking by, or they looked out the window and saw [the Oakwood] was being torn down and they were so moved they had to come and tell us what it meant to them personally.”

According to its bilingual brochure, the Community Coalition is: “A community organization that trains hundreds of African American and Latino residents to fight together for policies that promote safe neighborhoods, positive economic development and quality education in South L.A.”

The Oakwood is one of about 200 South L.A. motels and liquor stores that the Coalition says it has helped shutter or prevent from being rebuilt. The Coalition employs land use and licensing strategy, with members gathering evidence of illicit behavior, and staffers helping coordinate the members’ work as well as teaching about civic codes, abatement regulations, the ins-and-outs of hearings, and generally how to build political will.

The Community Coalition was born in 1990 amidst the crack cocaine epidemic. Early on, the Coalition surveyed South L.A. residents for solutions to crack-related violence, crime, and substance abuse. Residents mentioned systemic matters such as education and jobs. The chief concern, Harris-Dawson says, was: “Shut down some of these liquor stores; we have too many liquor stores.”

Shops that drew ire served as defacto crime bazaars. “In some liquor stores they would actually sell the pipe and the screen – they would sell everything but the crack. And the person selling the crack would be standing outside, using the pay phone to conduct deals,” Harris-Dawson says.

The executive director tells of one boozery where he says the owner was caught possessing a shotgun and brick of marijuana. When that didn’t get the place immediately closed down, Coalition members photographed public urination, broken bottles, used condoms, and crack pipes in the adjacent alley. There were protests and boycotts. Coalition staffers helped members make their case to the City, and helped provide transportation to a hearing. The campaign worked, and the store’s license was revoked. Today, the property is a dirt mound. “It’s going to become housing and retail,” Harris-Dawson says.

Not every action brings such positive results,” Harris-Dawson says. Only fifty of the 200 closed shops have been converted into new uses, ranging from laundromats to mental health clinics. Grocery stores remain a frustratingly unfulfilled goal.

But then again, there’s the Oakwood. Or, what was once the Oakwood. Where that notorious motel stood, now stands a family-friendly, affordable housing development. “You see kids riding their bikes in front of it, and other kids playing on their balconies,” Harris-Dawson says. “And sometimes when you pass by in the morning, you see families leaving to go to the bus to go to work. It’s just really, really a nice story.”

Is Transit a Private Business or a Public Service? Either Way, We Have to Pay For It

What Does Spatial Justice for Unhoused People Look Like?

Is More COVID-19 Relief On the Way for Transit?