Like many cities, Cleveland suffers from a wide cultural divide between natives, who have stayed around its suburbs, and transplants, who have moved into the core. An assessment of the two worlds, and an argument for why the city should ditch its insularity in favor of inclusiveness.

In Cleveland, sometimes I feel like I’m straddling two worlds, with two different sets of assumptions.

I think they’ll be familiar to folks across the Midwest.

World 1: Younger Clevelanders who grew up here, particularly on the west and south sides. Some description: Late 20s to 30s.  Many Catholic—be it through Polish, Irish, Slovakian, Italian or whatever descent. Despite the rumors of a mass exodus, most of them haven’t left. But those who grew up in the city have largely moved to the suburbs, and those who grew up in inner-ring suburbs have mostly moved farther out. A few buck the trend and move closer to the core—in Tremont, Downtown—but they’re anomalies. Some have stayed put.  As for attitude, work—the indigenous are closer to the Baby Boomers than they are their actual age. They are, in many ways, an extension of a legacy city threaded forward into the present, complete with naysaying about how Cleveland has fallen (though they only knew it on its knees)—complete with manufacturing and union ties, police and firefighter ties. They haunt West Park bars and Lakewood bars and general old man bars, not for irony, but a buzz. Many smoke still. Think the term “urban ag” is some derogatory remark. They talk about high school (which one? what year?) They have kids and drive tons and see bikes as things they have to put under the tree around the holidays.  But they are solid, and are attached to Cleveland like a mole is attached to the body. They are loyal that way. Perhaps too loyal.

World 2: Clevelanders who grew up elsewhere, be it in Ohio or out of Ohio, but not considered from here. Some description: No coalescing ethnic or religious descent—a mix of everything and nothing. They live in the core, be it city neighborhoods, Downtown or inner ring suburbs. Cleveland is more about today to them, with the legacy ties tethered mainly to their chagrin that there’s a legacy still weighing the city down. But they appreciate the city’s past, especially it’s built past. They form Facebook groups about micro-lending and historical preservation and bike advocacy and outings. There’s a lot of biking overall—doing it, talking about it, with biker bars popping up. But not biker bars as World 1 knows them—with bearded dudes and ladies who have been living in it to the point where they seem held together by tattoos—but with pouches and helmets and tiny, tight shoes. The newcomers have an entrepreneurial spirit, with start-ups and worker co-ops defining the day, as opposed to structured times and static work stations. Urban planning to them doesn’t arouse shrugs, like with their indigenous counterparts, but is rather part of the day, like finding food.  This is partly why they are attracted to Cleveland, for it’s a real city with a real history, but with an opportunity to do real shit. But it’s more than that, less a cosmopolitan thing than a rust thing. For the Rust Belt means something: Not just the consequence of aged metal, but an essence of tangibility and ruggedness in an age of sprawl, sanitization and display. 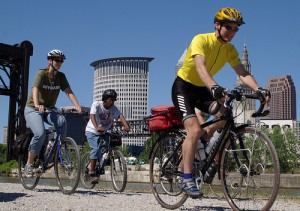 Like I said, I straddle both: Mid-30′s, from here, Catholic. I go to old man bars, have a kid and went to St. Ed’s High School. But also: I live in the urban core, blog, studied urban planning, am a Rust Belt romantic and know urban ag isn’t a put down.  But these two worlds hardly meet, despite the age similarity. At least that is my experience.

And it’s not just a Cleveland thing apparently. From the blog Cincinnati Imports (click here to see their Facebook group):

ok, we have skirted around this issue long enough so let’s just put it out there. we, and by “we” i mean “i,” think it is weird that people from cincinnati always want to know where you went to high school…i moved here from new york where nobody went to high school there and even if they did, you wouldn’t have heard of it.

i don’t blame cincinnatians, this is what they are used to. but on a general level, i really think it reflects the insular nature of the city. no wonder so many people aren’t that welcoming to newcomers to the city… they don’t even realize there are any!

And then over in Pittsburgh, blogger Mike Madison, a newcomer to the city back in 1998, recently had this to say about that fine line between attachment to place and the city’s social capital stuck in motion:

This place is full of warm and friendly people. The core decency of Pittsburgh, its communal and communitarian spirit, its family-friendliness, its respect for history and tradition…come through pretty quickly in social settings across a broad range of Pittsburgh…

Madison could have been talking about Cleveland, Buffalo, etc., and as indigenous to Cleveland, his post gave me pause. Because though I straddle both worlds, I am from one, and my interests give me the benefit of experiencing the world of the newcomer that is frankly not understood—and sometimes derided—by many I grew up with. Yet we are called legacy cities for a reason. And for long we have been molded in a way of doing and being that eventually tilted our attachment to Rust Belt tradition into the stasis that enabled our oxidation in the first place.

And while I began this piece simply describing the gaps between two worlds, the newcomers and the indigenous, I finish it a bit more declarative than I intended: By saying that the world of the indigenous Clevelander has been less a world than it has been a fish tank—and we have been suffocating in our exclusion of fresh air and ideas for too long.

So to all my native friends: Puts your beers down, unclench your fists—“urban ag” simply means “urban agriculture”.

(i) Of course not everyone fits perfectly in each world, but the categorization works to advance the discourse. And no, this is not an exhaustive list of worlds that are competing (e.g. that 500-year old racial divide). Just two that are increasingly popping up on the radar given the more recent influx of young newcomers to Cleveland that are being noticed by those that have been here their whole life.