As part of Gov. Chris Christie’s goal to develop an off-shore wind industry, New Jersey had a plan in the works to build its first wind farm near Atlantic City. After deeming the project cost-ineffective, however, a state agency is seeking to discourage construction.

New Jersey is being urged to reject a proposal to build the state’s first offshore wind farm about three miles off Atlantic City by the Division of Rate Counsel, which argues the project fails to deliver a net economic benefit.

The recommendation from a consultant hired by the division is backed by its director, Stefanie Brand, who said, “the numbers just don’t add up.” The consultant’s report was filed Friday with the Board of Public Utilities, which is expected to act on the project sometime this spring.

The opposition to the project is a bit surprising, given Gov. Chris Christie’s strong desire to develop an offshore wind industry, but reflects a commitment that any project financed with subsidies from electric and gas customers must have a “net economic benefit.”

Fishermen’s Atlantic City wind farm, a 30-megawatt facility located 2.8 miles off the resort, fails to achieve that standard, according to David Dismukes, an energy expert from Baton Rouge hired to analyze the project.

“The costs of this project are simply too high to justify New Jersey ratepayer financial support,” Dismukes said in testimony filed with the BPU.

Many details of the project were kept confidential in his testimony and an accompanying report, including the overall cost of building six wind turbines and what Fishermen’s Energy, the developer behind the project, would expect to get for the electricity the wind farm produces.

Daniel Cohen, president of Fishermen’s Energy, dismissed the consultant’s report, saying it contains many statements that are factually inaccurate, including the second sentence of its executive summary. The report said Fishermen’s wind turbine manufacturer, XEMC, a Chinese-based vendor, had not produced any direct-drive wind turbines. Cohen said it has produced 1,300 turbines since 2006.

“If your first page begins with an inaccuracy, how can you base your conclusions on inaccurate information,” Cohen said. “When the BPU looks at all the facts, we believe our project will be approved.”

Still, the position taken by rate counsel suggests the state intends to seriously weigh the projected benefits of switching to a cleaner source of energy against the higher costs consumers would have to shoulder to make the projects financially feasible. 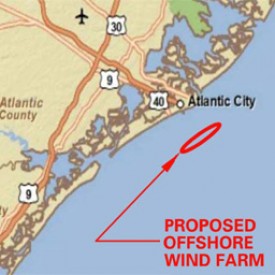 If the project is approved, it would be one of the most expensive offshore wind projects ever developed, according to the consultant’s report. Dismukes also disputed some of the company’s claimed economic benefits, most of which stem from increased tourism to Atlantic City to see the wind turbines, Brand noted.

“They said the facility would attract more tourists than the Washington Monument,” said Brand.

The economic harm the project would cause would far outweigh any positive economic benefits, Dismukes said.

Higher electric bills in New Jersey, which already ranks in the top 10 of most expensive states for energy, would drive businesses out of the state or make them unable to compete with rivals in other states, according to critics of offshore wind.

Asked if her office’s position on Fishermen’s project might bode badly for the other wind projects seeking to win leases to build wind farms off the coast, Brand replied, “I hope not.”

“I would like to think the other projects are going to be a bit more competitive in terms of cost,” Brand said.

The federal government also is hoping to develop an offshore wind industry along the eastern seaboard. Last week, it cleared the way to begin leasing activities by the end of the year. In New Jersey, 11 developers have expressed interest in building offshore wind farms up to 23 miles off the coast from Barnegat Light to Avalon.

Although the report would not disclose the size of the Atlantic City wind farm project, it is much smaller in scale than the other projects being pushed in New Jersey. Previously, developers had suggested building about 300 megawatts of new wind capacity off the coast, projects at that time they estimated would run to about $1 billion. Hoping to capitalize on economy of scale, however, a few developers are now urging the state to allow them to build about 1,000 megawatts of wind capacity.

Take a Break to Admire These Gorgeous, Sustainable Homes