In a web exclusive, Ariella Cohen explains how the international lending phenomenon works at home.

Sunshine Best immigrated to Chicago with no American credit history, little spare cash and a decidedly unglamorous digestive disorder. In short, she was no bank’s dream candidate for a small-business loan. Not helping matters was that the business in question was a bakery that would exist only online, and exclusively sell desserts made without gluten, an elastic protein found in wheat and completely indigestible for Best and others who suffer from Celiac disease.

After being turned away by bank after bank, Best resigned herself to a grim routine of working two jobs and racking up credit card debt. Then a friend told her about a low-interest credit builder loan being offered by an organization called Accion Chicago. Two years and one $1,000 Accion loan later, Rise & Shine Desserts is a flourishing small business specializing in gourmet gluten-free treats. 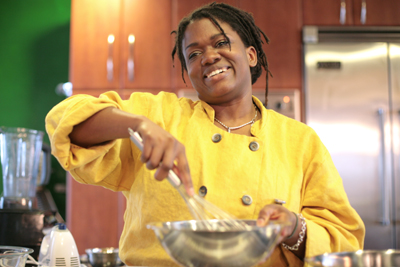 A former computer programmer raised in Toronto by parents who emigrated from Barbados, Sunshine Best isn’t exactly the type of person Nobel Peace Prize-winning microcredit pioneer Muhammad Yunus had in mind when he began, in the 1970s, to lend small sums of money to poor women in Bangladesh. But these days, Best’s one-woman enterprise represents not only a piece of the multi-billion dollar international microfinance market, but a critical part of what urban economic development is shaping up to look like in President Barack Obama’s America.

Widely recognized as one of the 20th century’s most powerful innovations, microcredit is the practice of extending small loans at low interest rates to poor entrepreneurs who generally live in the developing world and lack access to conventional bank loans. By lending a beggar as little as $10 to buy, for instance, a loom to make textiles or a cow to make milk, microcredit bankers like Yunus are revolutionizing the way poor people, especially women, sustain themselves in some of the world’s hungriest places.

In America, where $10 can barely buy lunch and a larger proportion of the population is able to obtain conventional bank loans, microcredit is far less common than in the developing world. A 2007 report done by the international Microcredit Summit Campaign found that a miniscule 176,958 people out of the 15.4 million who received microcredit loans in 2007 lived in North America and Western Europe.

In the U.S., microcredit loans typically range from $1,000 to $10,000 and cover business start-up costs ranging from a portable stove for a food vendor to rent for a hair dresser to the $1,000 FedEx bill that Best needed to pay in order to get her online bakery running. Paying off one $1,000 bill does not seem like a huge deal, but Best says it would have been near to impossible to continue growing her business without writing the check. And the fact that she knows her business model well enough to know this says something about microfinance’s close-fitting approach. “The traditional financial system is just not set up to support unique niche business models like mine. I could not have gotten to where I am, especially not during a recession, without microcredit,” says Best, rattling off similar success stories such as that of a Latin American friend who was not eligible for a bank loan, but used microcredit to open an automotive body shop that is now so successful the family is considering opening another; an African-American hair dresser who used microcredit to open a hair salon after being turned away from nearly every bank in town and a former felon who opened a car wash with a $5,000 loan that would have been completely impossible to obtain, because of his criminal history, if not for a microcredit institution.

Her words bear special relevance in today’s America, a place of wary lenders, steadily rising unemployment and niche-minded, Internet-savvy entrepreneurs. Last year, the American branch of Yunus’ international microfinance institution, Grameen Bank, launched a pilot program in a working-class, immigrant neighborhood in New York City’s borough of Queens. So far, $1.2 million has been lent to 440 New York women entrepreneurs. The return rate on the loans is 99.5 percent, according to the organization. This year, Grameen America wants to raise the capital necessary to open lending branches in New York’s other four boroughs, as well as in the Raleigh-Durham area of North Carolina, where it has already gotten the support of local business chambers and government agencies. According to Grameen America President Vidar Jorgensen, there is “growing interest” in additional lending branches other parts of North Carolina, California, Nebraska and Arkansas.

It’s not surprising that Yunus chose to expand his American operations the same year President Barack Obama entered the Oval Office. Obama’s late mother, S. Ann Dunham Soetoro, dedicated much of her career to developing microfinance programs in Indonesia, and while Yunus and Soetoro never met in person, the microfinance pioneer knew Soetoro’s legacy well before Obama stepped onto the national political stage. Already, this legacy has begun to be realized through the actions of the new president. The Recovery Act Obama signed into law in February provided $50 million in microlending funds over the next two years, stimulus money that will go out through state Small Business Administration offices, on top of another $21 million allocated in this year’s federal budget to the SBA’s micro-enterprise programs. This past spring, Obama also unveiled a new $100 million microfinance growth fund for entrepreneurs in the Western Hemisphere. The White House described the fund as a response to escalating job losses and ever-tightening credit. Most recently, in May, the Obama administration nominated Maria Otero, president and CEO of global microfinance giant Accion International, to be Under Secretary of Global Affairs at the Department of State. Otero has expressed her intention to accept the appointment. Cut from the same micro-cloth is Otero’s boss, U.S. Secretary of State Hillary Rodham Clinton, whose support for the approach goes back to her time in the Arkansas Governor’s Mansion, where she developed small-loan programs for the state’s struggling small towns at a time when microcredit was virtually unheard of in the United States.

But looking back at the Clintons’ experience with microcredit in Arkansas shows that the financing instrument is no silver bullet in the battle against urban poverty and unemployment. Mary Houghton is the founder and president of a large community development bank in Chicago called Shore Bank, and an early proponent of microcredit in America. She helped manage the Clinton’s initiative in Arkansas, called the Good Faith Fund. Houghton worked under the Clintons’ leadership to find microcredit customers and incubate their businesses. “It was the first wave of microcredit in the United States,” says Houghton. The activism-minded banker remembers being disappointed when the program gradually morphed into a small business loan program and eventually, an education program. Houghton’s experience in Arkansas imbued her with the sense that the higher cost of loans in the U.S., combined with the need to train people with the skills to operate a successful business able to compete with large-scale corporate operations, will always make microcredit a difficult proposition in America. “In the developing world, they seem to know how to get people in self-employment without putting a lot of resources into training. Here, the training is necessary and even after that the barriers to success are so different,” she says.

Other microcredit experts agree that banks must be connected with other social services. “No one that wants to live in a community with bad schools, crime, dirty streets no grocery stores, no health care but a good bank,” says Jonathan Lewis, founder and chief executive officer of Microcredit Enterprises, a U.S. non-profit that provides loans to microfinance institutions.

But even as industry insiders debate how Obama’s microcredit vision will play out in America’s inner-cities, there is one group that is more than ready to stop talking and begin working: urban entrepreneurs. “Microcredit was able to get me off the ground,” says Karen Tappin Saunderson, who sells handcrafted, natural hair and spa products at her store, Karen’s Body Beautiful in the Clinton Hill neighborhood of Brooklyn, New York. Tappin Saunderson had no credit when started her business, and calls the microcredit loan she received from Accion New York a miracle.