The Mexico that Americans overlook is ever so evident in Mexican photography. With the utmost artistic quality Mexican photographers have documented their country’s social, cultural and political issues. Mexican Photographers Today: Facing a World of Transition, held at the Tucson Museum of Art, examines many aspects of Mexican life seen through the lens of 27 photographers who have lived it, giving the American viewer a chance to know Mexico as something other than a tourist destination.

Mexican photography is known for its quality and powerful artistry; its content and its story telling. What is lost in the American view of Mexico seems to be just what its photography provides: culture, beauty, and the life of its people. Many Americans are detached from their close and lively neighbor seeing it as a tourist attraction, a place with nice beaches and cool drinks, or another menial cousin country in need of help. What we seem to miss is everything amazing that Mexico has to offer.

Until September 28th, The Tucson Museum of Art will be holding Mexican Photographers Today: Facing a World of Transition, an exhibit of over 200 works by 27 contemporary Mexican photographers. It is an exhibit that documents the beauty and struggle of Mexican Life through the past 30 years. The photographs containing messages focused on social issues, religion, struggles in megalopolis, cultural displacement, and historical ideals that never seem to die. 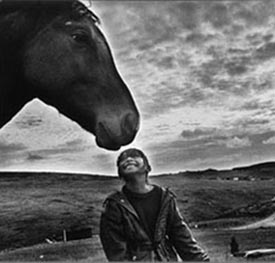 They are personal documentations of disturbing and beautiful subjects. It’s hard to even try to put into words the impressive quality of these images. Everything from their contrast, composition and content are completely in agreement. It all works together to create a poignant and magnificent image. Mexican photography stems from the combination of landscape painting and portraiture making it documentary with artistic intent, according to curator and specialist in Latin American art at the Tucson Museum of Art, Fatima Bercht in an interview with Arizona Public Media. 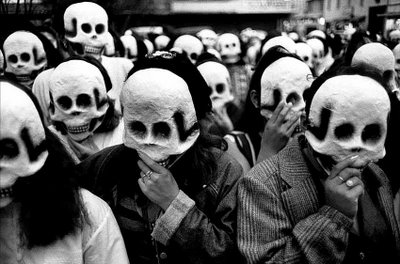 As documentary photographers, the artists included in this collection chose to capture moments in time, not directed, not composed, sometimes even risking bodily harm to create their art. Their images are true moments in times, true celebrations, true despair, true passions making them all the more powerful and moving.

The exhibit, displayed in a spacious room with a ramp ascending two levels, starts with the work of Manuel Alvarez Bravo, one of Mexico’s greatest photographers, and slowly takes you through a thorough and complex tale of Mexican life told by the people who live it. The images are all personal and passionate.

The work of Mariana Yompolsky deals mainly with the native indigenous Mexican, an issue Bercht says stems back to the early nineteenth century. What sets Yompolsky’s work apart from the criticized historical photography of this culture is that Yompolsky does not capture them just to have a pretty picture of an exotic person in costume posed in a passive manner. She gets close and intimate capturing true raw human moments. To better describe Yompolsky’s mentality on her work Beld uses a little known story about a journalist asking Yompolsky about why she photographs Indians. Yompolsky’s response was short and hard.

“ I do not photograph Indians. I photograph human beings,” said Yompolsky.

All of the photographers in this exhibit photograph human beings and the human conditions with in the context of their cultures. That is the driving emotional force behind this work. It is essentially human.

While there are many subjects covered, megalopolis Mexico City seems to be a reoccurring theme. From images capturing a deviant youth jumping off a curb in front of a Sex Pistols tag and images of the congested metro, to the cultural parades and political protests, the documentation of the intricate life in this city seems to never disappoint. It allows the viewer to gather an idea of what the city really is from the underbelly to the mainstream. The work in the exhibit is also focused on the opposite, the rural areas, the poorer countryside, the struggle of the farmer and the struggle of their children.

Mexican Photographers Today is an inside look at what is happening in this country, what is has to offer, and the problems it faces and has yet to overcome. While including work from 27 different artists, this exhibit is a holistic view of a Mexico not seen by Americans, a Mexico full of life and struggle with a long and rich cultural history.