Subway construction and gentrification worries have some of Los Angeles’ best-dressed bards singing los azules. The renovation of an historic Boyle Heights hotel might help. (Photos after the jump!)

Until the construction came, the traje de charro-costumed musicians would gather, waiting to be picked up and transported around town to ply their sonorous trade.

With restoration, though, came tourism and gentrification and parking restrictions. And so, the story goes, many of the mariachis of Los Angeles abandoned the historic Downtown core of Olvera Street and headed a few miles east, across the L.A. River to Boyle Heights, and specifically the intersection of Boyle and 1st Streets. 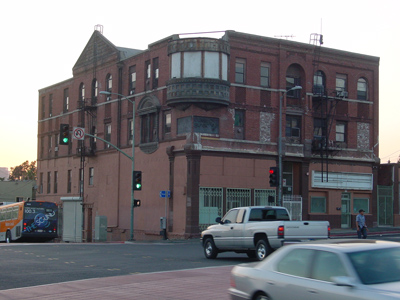 The mariachis, with their violins and trumpets and guitaros, became such a feature of the location that in 1998, the City and the Metropolitan Transportation Authority paid for the installation of “Mariachi Plaza.” This monumental, stone, four-columned and blue-domed gazebo-cum-bandstand — a gift from the Mexican state of Jalisco — was landmark and beacon. Angelinos seeking to hire these bedouin bards of the bolero (and son and ranchero, etc.) now knew just where to come.

The romanticized song lyrics to “Cancion del Mariachi,” above, say that a mariachi doesn’t need money. But the song relates he does need a horse. And transportation — equine or otherwise — is proving to be a key L.A. issue for the musicians.

Eastside subway expansion is coming to Boyle Heights, with a Gold Line station slated for the Mariachi Plaza area. Major construction has meant, at least short-term, major inconvenience. With the fenced-off gazebo rendered inaccessible, the public doesn’t come by as often, and the music men (and occasional women) in turn can be harder to locate and hire. (Some mariachis recently agreed to move for six months en masse to a Plaza-adjacent side street. Others remain at the intersections near the gazebo.)

At one recent Downtown forum, mariachi musician Sergio Mendez, violin player and leader of the venerable band, Mariachi 2000, told the assembled crowd that he hoped the City didn’t forget about the mariachis and their contributions to the neighborhood.

When one urban planner attending the forum suggested that the arrival of the subway would open up a much greater geographic area to the mariachis, Mendez was nonplussed. Through an interpreter, Mendez indicating that carrying instruments on the trains wouldn’t be ideal, and worried that mariachis’ crisp outfits would not keep well on rail rides. Meanwhile, a fellow mariachi was quoted last winter saying construction had caused some players’ earnings to drop by 90 percent.

A larger question will be what happens to the immediate neighborhood once the subway arrives, in summer 2009. Presumably, following patterns elsewhere, domicile prices will rise. And whatever the Cancíon del Mariachi lyrics say, a modern mariachi is likely to have rent or mortgage to pay. The non-profit East Los Angeles Community Corporation (ELACC) hopes to offer at least some relief here. In December, 2006, ELACC purchased a once-showcase, and more recently dilapidated, four-story brick Victorian building adjacent to Mariachi Plaza. Known formally as the “Boyle Hotel” but colloquially as the “Mariachi Hotel,” the edifice received its nickname from the large number of players who reside here, and stroll the short commute to their open-air office. 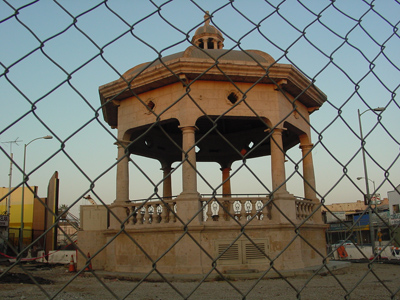 ELACC intends to renovate the hotel into 32-units of affordable housing. Plans call for including a performance and rehearsal space in the renovated building, as well as a “permanent exhibition celebrating the history of the Hotel and its role in the rich cultural heritage of mariachi music in Los Angeles,” according to ELACC’s website.

“This is one of the oldest neighborhoods in Los Angeles. It was developed in the mid-late 1800s. There is a lot of architectural beauty in the neighborhood and it’s really important to preserve that,” says ELACC co-founder Evangeline Ordaz-Molina. “But this neighborhood has also been historic in another sense in that it’s been a traditional landing point for immigrants and people coming from other places. It’s been a neighborhood where a new immigrant could come and find affordable housing, a family friendly neighborhood with services neighborhood services and neighborhood support.”

Ordaz-Molina and her ELACC colleagues work out of a restored Victorian not far from the Plaza, so she’s well versed in the significance and vitality of the mariachis.

Next Week: Nuisance Abatement! How South Los Angeles’ Community Coalition uses existing land use laws to take on and take down derelict liquor stores and flop houses that make for bad neighbors.