In her new column, DiverCity, Jody Pollock discusses an online map that tells you who made donations in support of California’s Proposition 8 gay-marriage ban— and what sites like it mean for privacy.

This is the first installment of Jody Pollock’s column, DiverCity. Jody concentrates in Urban Studies and Hispanic Studies at the University of Pennsylvania. Her column examines the sociology of cities, looking at how boundaries are formed and blurred between different social groups within the urban context.

Google Maps can give directions to the nearest Italian restaurant, to the Red Sox game, to Philadelphia from New York. But now, Google Maps can also give directions to the nearly 14,000 donors who made contributions to help pass the controversial California state ballot initiative, Proposition 8, which banned same-sex marriage early last November. 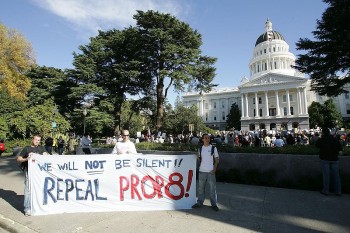 People protesting the passage of Proposition 8 before the California State Capitol in Sacramento on November 9, 2008.

Eightmaps overlays the thousands of donor names listed on California’s campaign finance website onto a Google Map of the country, allowing users to zoom in to particular neighborhoods to see who spent how much to change the state constitution. Donations mapped range from a homemaker in southern California, who donated $100 last August, to a private individual in suburban Pennsylvania who donated well over $1 million. Laguna Hills and neighboring Laguna Beach, Calif. are peppered with red markers, while, not surprisingly, San Francisco has only a few scattered mentions.

Other websites have created similar lists, though none are quite as interactive as Eightmaps. Electiontrack.com, run by Scott Lay, president and CEO of the Community College League of California, lists all contributions over $1,000 and all contributions of over $100 given before October 17, 2008. It is updated hourly, and since January 30, the website has begun to include even the most minor donations—like the $20 given to the National Organization for Marriage by a dean of students at a community college in Connecticut.

These online databases represent a new wave of open democracy in the Age of Information, one that some say might actually harm democratic involvement rather than encourage it. Blogs, listserves and Google Maps alike are abuzz with a privacy debate, an unexpected offshoot of the Proposition 8 controversy.

In late January, much to the dismay of the Yes on Prop 8 campaign, a federal judge denied to grant a preliminary injunction to prevent the disclosure of donors who contributed between $100 and $999 since October 18. The suit alleged that California’s Political Reform Act of 1974, which requires disclosure of state and political campaign donations of over $100, is unconstitutional on the grounds that it violates donors’ First Amendment rights free from threats or reprisal. The Yes to Prop 8 campaign cited the harassment—ranging from angry emails to death threats—of donors whose information has become public domain since contributing to the cause. The intended transparency of the Political Reform Act has been manipulated, they say, exposing donors to harm rather than creating an open democratic process.

But the court’s refusal to grant anonymity to donors backs the Political Reform Act and those who have used its data to create websites like eightmaps and Californians Against Hate, which has called for organized boycotts against those donors and businesses listed on their “Dishonor Roll.”

Aside from this particular lawsuit, Proposition 8 has kept the California Supreme Court busy. One day after the initiative passed, three lawsuits challenging it were filed with the court, questioning its constitutionality, its potential violation of the separation of powers doctrine under California’s constitution and the effects it may have on the 18,000 same-sex marriages officiated last year before its passage. In mid-December, the Prop 8 Legal Defense Fund and Ken Starr—of Clinton impeachment fame—filed legal briefs to defend the constitutionality of the proposition and to support the nullification of any same-sex marriages that were performed between May and November. Early this month, the Court announced a March 5 hearing for oral arguments in the suit intended to overturn Proposition 8. A written opinion should be released within the 90 days following the court date. It has the potential to set a precedent for national same-sex marriage policy.