Tough liquor laws and the lack of an existing bar scene have made it difficult for nightlife businesses to survive in one Maryland suburb. Bars may attract further business and development, but they must prove that they can thrive first. Otherwise a dense, lively scene might never come.

Last weekend, Piratz Tavern, a pirate-themed bar in downtown Silver Spring, Md., received a makeover from the TV show Bar Rescue and re-opened as a more conventional hangout dubbed Corporate Bar & Grill. While host Jon Taffer and many customers say it failed because of bad food and poor service, there are other factors that sunk this ship.

For starters, Montgomery County makes it hard to open a bar. Every place that serves alcohol in the county has to buy it from the Department of Liquor Control, whose markups and bureaucratic delays result in higher prices for booze than in surrounding areas.

The county also requires that food make up half of all sales at establishments selling alcohol. And until a few years ago, there was a limit on how many liquor licenses a single owner could hold.

These restrictions make it difficult and expensive to run a bar, which encourages owners to locate in areas where there’s already a bar scene with a guaranteed customer base. Hence, there are lots of bars in Bethesda and relatively few elsewhere. Yelp counts 25 bars in nearby downtown Bethesda and just nine bars in downtown Silver Spring, including Babe’s Sports Bar, which closed earlier this month. And both pale in comparison to Clarendon, Va., which with 44 bars has the highest number of any neighborhood outside the District of Columbia.

This hurts bars in other parts of Montgomery County, which lose customers just by not being where all of the other bars are. It’s especially hard for bars like Piratz Tavern. Though I’ve enjoyed myself thoroughly each time I went there, I can safely assume that not everyone wants to go to a bar and drink grog and sing sea shanties.

Piratz was a niche business, like a Korean restaurant or a record store, reliant on a small portion of the general public for their customer base. Niche businesses need a lot of people coming to the area to ensure that enough of them want what you’re selling. That requires a high population density, like in the Akibahara “geek ghetto“ in Tokyo, or a concentration of businesses serving a niche population, like Virginia’s Annandale, whose 900 businesses catering to Koreans make it a destination for Greater Washington’s Korean community.

When you have a lot of people coming to your area, niche businesses can thrive. But in Silver Spring, where the bar scene and thus the pool of potential customers is very small, anything too unusual will get squeezed out. 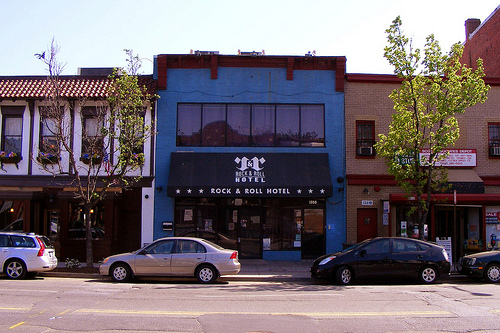 Successful nightlife districts offer visitors lots of choices for dinner, drinks and entertainment options. That’s why Joe Englert purposely opened several unique venues at once along H Street NE in the District. He provided lots of reasons for lots of different kinds of people to come there, drumming up a substantial bar scene in a short period of time and helping to revitalize the neighborhood, which in turn produced more bars and restaurants.

Silver Spring could do the same if Montgomery County made it easier to open a bar here. Making the area a bigger nightlife destination could draw business to existing bars while encouraging new bars to open. It could also provide enough customers for niche bars like Piratz Tavern. Not only that, but it could also make the area safer, getting people on the streets at night when the sidewalks are normally empty.

Piratz Tavern didn’t just fail because it was a pirate-themed bar. It failed because there aren’t enough bars, pirate-themed or otherwise, to create a critical mass of bargoers in Silver Spring. Unless things change, the new Corporate Bar & Grill will struggle as well.