Participants study programming and problem-solving for four months, while earning $250 a week, and then become paid apprentices with partner employers. 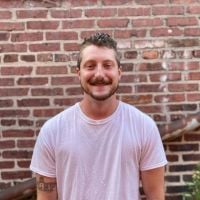 Lilly Tilden won’t forget the first time she noticed her software development work making an impact. Tilden, whose last job was working as a ski-lift operator in Colorado, had completed a grueling 20-week developer training with Baltimore software firm Catalyte and by fall of 2020, she was working with the Baltimore City Health Department to improve its apps to track and administer COVID vaccinations, mobile testing and other COVID-related metrics.

In March of 2021, “I went and got my vaccination and I met somebody who used the features that I created, who actually did the intake,” Tilden, 28, recalls. “It was at that moment that I realized I went from making someone’s vacation better to impacting a massive amount of lives on a day-to-day basis. To be honest, I think it really did put into perspective what I wanted to do with my career.”

Tilden, since hired by the city health department as a full-time employee, was among a dozen rookie software developers who worked for the city in what would become the inaugural fellowship cohort of Retrain America, an ambitiously named initiative launched by Catalyte and vocational training nonprofit Baltimore Corps in the pandemic’s wake. Their mission was to rapidly retrain Americans to work in lucrative, high-barrier tech jobs amid widespread unemployment and a wave of career changes in the U.S. workforce. Under the program’s design, after four months of participants intensively studying programming languages and problem-solving (and earning $250 a week), Catalyte hires trainees as paid apprentices contracted out to partner employers for six months. In the end they’re offered full-time jobs with that employer.

Catalyte and Baltimore Corps spun out Retrain America as its own nonprofit in early 2021. Eventually the program plans to spread out into other markets, but so far it’s remained focused on Baltimore, where it has a growing roster of hiring partners like utility giant Exelon and health insurer CareFirst BlueCross BlueShield. Fagan Harris, CEO of Baltimore Corps and founding partner of Retrain America, says the intention is to recruit apprentices who “are not the usual suspects” in tech and IT fields — women and racial and ethnic minorities, more specifically — calling that Retrain America’s “North Star.”

Catalyte has become a sort of pioneer in tech reskilling since 2000. It recruits developers-to-be — many of them without a college degree, like Tilden, or lacking any prior software training — using a skills screening to see if they’re well-suited for tech careers. The company says its process assesses some 3,000 variables while eschewing traditional criteria like resumes and higher education credentials in hopes of catering to groups who are infamously underrepresented in tech. (It’s also timely given the ever-widening opportunity gap for Americans without college degrees.)

“We’re looking for people who are able to solve problems under pressure,” CEO Jacob Hsu said in a 2018 interview with Technical.ly Baltimore.

Typically Catalyte puts apprentices through five months of intensive in-house coursework — “it is the most overloading and difficult thing I have ever done, and I went through basic training for the Army,” Tilden says — and then hires them for two years as developers for its software engineering services business. The model has served Catalyte well: The firm has amassed $56 million in total venture capital funding and is now active in seven city markets outside of Baltimore.

After the COVID-19 pandemic left millions jobless and spurred millions more to reconsider their careers, Catalyte saw a heightened need — and an opportunity — to tailor its retraining paradigm to be of service. And, working with Baltimore Corps, it could more actively target outreach to underserved, low-income communities, rather than passively waiting for people from those places to apply. Catalyte tweaked its model by accelerating training from 20 to 16 weeks for the Retrain America program, and with Baltimore Corps the company assembled a roster of funding, administrative and employer partners who could commit to taking on apprentices sight unseen.

“It’s very, very active, it’s top of mind,” he says when asked how outreach differs from that of Catalyte’s usual training model. “We’re out there educating people and talking to them about what their career options are.”

Across two cohorts so far — one completed last fall and another that launched Jan. 30 — totaling about two dozen people, participants’ prior careers included working as teachers and in food service, retail and construction roles. Other than Tilden, who was recently hired away from the software firm by the city, the fellows who apprenticed with Baltimore’s health and IT departments are now working as full-time developers at Catalyte.

The next group will soon start as product analyst and designer apprentices for energy giant Exelon, owner of BGE in Baltimore. Officials at both Retrain America and Exelon say each side gains something — Exelon can address an IT and tech talent gap while the nonprofit gets a “really strong proof point” for scaling up with other employers, Pearson says.

Jen Peterson-Gutleber, Exelon’s director of information technology, notes that since COVID began, “we are losing more traditional employees than we are gaining, and it really is putting pressure on us to get creative in filling those needs.”

The apprenticeship model helps Exelon to reskill workers from underserved and previously untapped communities while hiring “an entry-level candidate who can grow over time,” she says. After those six months are up, those who become full-time analysts and designers will be earning “family-supporting wages” and have a new career track; Exelon, in turn, will have new programmers on board with a sense of “product ownership” over the tools they’ve built.

If this pilot run works as planned, the Chicago-based energy behemoth hopes to replicate the model in its offices in other cities like Philadelphia and Washington, D.C.

“This is really the first evolution,” Peterson-Gutleber says. “The whole intent of this pilot is to learn, adapt and, assuming we’re gonna have great success, how do we feel like we can repeat to the other cities that we serve?”

CareFirst is the next company queued up to take on an apprentice cohort after Exelon in Baltimore. The vision, per Catalyte’s January 2021 announcement of spinning out Retrain America as its own nonprofit, was and still is to “launch in Maryland immediately, with additional states and localities joining in quick succession.”

Historically, tech industry growth in cities has fueled the flames (and fears) of gentrification, drawing higher-earning — and usually white — workers from out of town into neighborhoods and displacing low-income and minority communities in the process.

Harris acknowledges as much.

“The tech economy is on the one hand a huge force for good in this country. It’s generating outsized economic value, a huge amount of innovation,” he says. “And on the other hand, Black people, women, the Latinx community are poorly represented in the ranks of engineers.”

Retrain America is targeting recruits who “have historically confronted barriers to education and training for these elite opportunities in the job market,” Harris notes. “What we’re trying to do is broaden the avenue of opportunity into these tech careers and professions, so that these people have a shot.”

The new cohort working with Exelon exemplifies that mission. Per figures shared by Retrain America, two-thirds of the apprentices are Black and half of them are women. Fifty percent of the cohort members do not have a college degree, and their average salary before embarking on this new path was just $25,799.

Geographically speaking, it remains to be seen if the nonprofit can live up to its ambitious name with future expansions. For now it’s working to set an example in Baltimore with local-first tech hiring and reskilling — ensuring its apprenticeships and resulting jobs are made by employers for underrepresented local talent, not outsiders flocking to the next urban tech boom.

As with the night sky, that North Star remains fixed in whatever city Retrain America goes next.

Editor’s Note: This article was updated with Eliot Pearson’s latest title, and to reflect that Exelon no longer owns Baltimore’s Constellation Energy.

Ethan McLeod is a freelance reporter in Baltimore. He previously served as an editor for the Baltimore Business Journal and the daily news website Baltimore Fishbowl. He's also written for CityLab, Slate, DCist and elsewhere.