Although Desire Street itself was never a functioning streetcar line, its aura is compelling. The street may be the most famous literature-related roadway in America.

A Streetcar Once Named Lili DeBarbieri

Further away from central attractions than even the adventurous go, the Big Easy’s most charismatic street isn’t named after a beverage. Tourist board representatives, somewhat familiar with its relevance, nonchalantly and unexcitedly provide directions to a street named for an emotion—Desire. Indeed, to locate Desire Street, visitors to the city must be motivated enough to ignore deterrents such as debilitating heat and residential neighborhoods of unfamiliar and questionable terrain.

Block after block, I walk past colorful, though weathered homes lucky to have escaped Hurricane Katrina, and I begin to wonder if it will be worthwhile to reach my destination. Could an admiration of Tennessee Williams’ work be taken a little too literally? Suddenly, ecstatic accomplishment erases the last hour of searching as I spot Desire Street. Desire’s bright blue street sign bears no particular literary insignia.

Why even make this lengthy excursion a part of my New Orleans holiday itinerary? I could have relaxed more on the beaten path. Although Desire Street itself was never a functioning streetcar line, its aura is compelling. The word desire to me seems to encompass the spirit of this Gulf Coast city. The street may be the most famous literature-related roadway in America. Desire’s tracks ran through the French Quarter, Faubourg Marigny, and to the outer limits, Desire Street, for which it was named. Beginning almost at the Mississippi River, the street ends at what was once a notorious and dangerous housing project.

Elegant and airy, streetcars seem to epitomize a slower, sleepier lifestyle, now long past in most parts of the United States. Streetcars take their time and so must you. But, a streetcar named Desire is no more; the line ceased operation in 1948 and today, the public waits on Desire to catch the bus. Recent proposals to re-build the streetcar line were rejected by the Federal Transit Administration as ultimately not cost effective.

I hop on Desire’s bus and head back toward the French Quarter. In a courtyard adjacent to Jackson Square, I sip a mint julep to escape the midday heat. Bourbon relaxes me as I envision Tennessee Williams enjoying similar pleasures.

With only an address, 632.5 St. Peter and a newcomer’s spotty sense of direction, I am inspired to approach my next planned stop. Anticipation is palpable. The apartment where Tennessee Williams lived while writing most of A Streetcar Named Desire is more well known than Desire Street itself and is a stop on a popular literary waking tour of New Orleans. I opt for the more self-guided kind. However, much like Desire Street, this niche attraction is easy to miss. I nearly do. 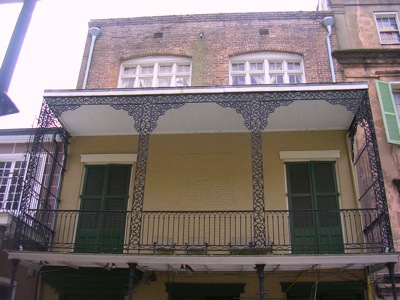 Located on the second floor, the apartment is quaint and frankly, typical in the beautiful French Quarter. A small, tasteful plaque on the wall illuminates its creative past: During 1946 and 1947 Tennessee Williams lived here and wrote a Streetcar Named Desire. Though not the all-encompassing shrine to the author I expected, it is by no means a disappointment.

A ‘For Sale’ sign swings unobtrusively from the rafters. My mind begins to churn. Why would such architectural treasures be left to the whims of a volatile free market? Is it a lack of funding or public apathy? Or, a little of both? “Most of New Orleans is not even aware of Tennessee Williams’ significance in world literature,” explains Kenneth Holditch, author and local expert.

Intriguingly, I learn that no literary guild owns the residence. French Quarter buildings are preserved on the outside but not necessarily inside. The property goes for roughly $2,250 to lease— almost a bargain in this part of town— and anyone can. Only the city of New Orleans lacks the necessary funds or desire to take the property completely off the market and turn it into a museum.

But would that option be desirable? “The French Quarter should not be a museum but remain a viable community in which people can still live and write and be inspired by the fact that Faulkner, Williams, and Oliver LaFarge lived and worked there,” Holditch remarks. Although I lament any cultural treasure going somewhat under preserved, it would be even more tragic for this area to become a French-themed Disneyland, plastic, static and un-dynamic.

Kneeling down to peer inside the mail slot, I yearn to further explore and absorb the atmosphere where most of Williams’ famous play was penned. All I can see are some cardboard boxes, lampshades and dust.

Turning a corner, I relish a peaceful stroll and take in a little more of the French Quarter. A cool breeze and few crowds allow my reverie. The St. Peter Street address is left behind but lasting memories are mine to cherish. Good times do roll in the Crescent City.

Lili DeBarbieri is a Tucson-based freelance writer. She has a passion for all things New Orleans.