“The national attention on Ferguson provides a unique opportunity for those of us working in the gray zone between established narratives to seat more minds at the table of change.” 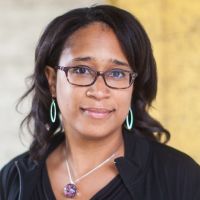 A member of the St. Louis County Police Department points his weapon in the direction of a group of protesters in Ferguson, Mo. (AP Photo/Jeff Roberson)

I say all of this because this is America and we like contextual markers for who we’re talking to. In St. Louis, we’ve institutionalized this. It’s called “where did you go to high school.” Here, like in many places, we like to catalog one another using referential shorthands. Take the fact that Michael Brown went to Normandy High School, subject of a recent St. Louis Post-Dispatch article whose headline included, “the most dangerous school in the area” because of its sky-high rate of in-school violence and discipline incidents. And the fact that Officer To-Be-Named was part of a police force with only three black cops out of a total of 53 policing a town that is more than 60 percent black.

But as much as we like to create people out of these assorted facts and details, none us come in neat packages, including Officer To-Be-Named and Mike Brown.

What we miss by keeping our stories from getting messy is the opportunity to find a different way of relating.

The New York Times did a great job of laying out St. Louis’ racial history. Mother Jones summarized the current demographics in Ferguson. St. Louis legal services organization Arch City Defenders reports that “fines and court fees comprise the second largest source of revenue for [Ferguson], a total of $2,635,400. In 2013, the Ferguson Municipal Court disposed of 24,532 warrants and 12,018 cases, or about 3 warrants and 1.5 cases per household.”

These facts are critical to understanding what is happening this week, but alone all they are is a higher-level packing of facts and details.

My radio, my Twitter feed and some parts of my Facebook newsfeed are filled with these narrative box sets. Our energy is spent arguing these plot points, but it is real discourse that is important. Sharing information is necessary, but only if we are willing to break out of our comfort zone, only if we are challenging ourselves to see outside the story that is most simple to conjure.

The hope for this situation is to write a new story about race in St. Louis.

The “Show Me State” is more than a state slogan for Missouri. Nothing mobilizes the St. Louis region more than outsider praise or criticism. The national media attention and the stream of digital information coming out of St. Louis right now provides a unique opportunity for those of us working in the gray zone between established narratives to seat more minds at the table of change.

There was a lot of work to do in St. Louis before this incident and regardless of the outcome, there will be even more work to do after. But I’ve seen an increase in active and intentional searching for real outcomes and real conversation over the past week. An increase in people saying, “I don’t understand, but I accept that there’s a real issue there.” More people are seeing the problems in clear relief. Now it’s time to begin the conversations that will move us toward new solutions.

Nicole Hudson has spent her career applying digital strategy in industries ranging from Broadway to finance to local non-profit news, including the St. Louis Beacon, where she spent six years. Nicole consults independently with individuals, organizations and brands on communication strategy, content development and the general navigation of digital waters. She was part of the 2012 Next City Vanguard class.