Another edition of our ongoing series “Lies Cleveland Tells Itself” is one of my personal favorites: That it makes economic sense to move 15 miles farther away from work in order to save several hundred dollars (maybe a grand?) on property taxes.

First I want to congratulate the region’s realtors (also shout out to Cleveland Magazine) for so thoroughly selling people on this monstrous whopper. They’ve kept the housing market humming for three decades on this falsehood even as the regional population flatlined. So congrats!

But the truth is that people are trading a cheaper tax bill for a much, much larger transportation tab, and in most cases they’re coming up short.

Transportation costs—that includes car payment, insurance, gas, maintenance and depreciation—are American households’ number-two expense, right behind housing. Americans spend about 18 percent of their income on transportation—more if they have a relatively low income and own a car, less if they have relatively high incomes and live near transit.

The problem is, people consistently underestimate how much money they spend on transportation. If you drive a financed car, you should assume that every mile you drive is costing you 50 cents—about the federal reimbursement rate.

So in Lakewood, your property taxes are going to cost you $4,345. If you live in Avon, you will pay, $1,488 less a year in property taxes or $2,857. Avon is generally considered to be a tax haven. Lakewood, on the other hand, is consider to be a high-tax area.

In addition, Lakewood has a 1 percent income tax. That will cost you an additional $600 per year. So right now, the total damage for living in Lakewood is just over $2,000.

There is a 15-miles difference between Lakewood and Avon. Assuming one person commutes to downtown, that is an additional 30 miles per day our Avon household must commute. In other words, 150 miles per week.

At 50 cents per mile, our Avon family is paying an additional $75 per week to live in Avon. Assuming that person works 45 weeks a year, the extra transportation bill is about $3,375. So the Avon resident’s actual cost are approximately $1,300 more. And that doesn’t include the loss in productivity the Avon family experiences spending an additional 40 minutes per day—over three hours a week—on the road. If the Avon family could bill for that time, at $25 per hour, that would be an additional $3,375 dollars a year this family would forfeit.

Check out the map below by the Center for Neighborhood Technology: 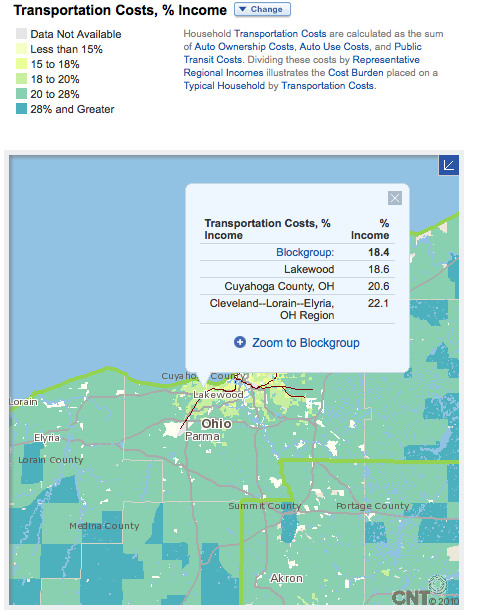 People who live in sprawling exurban regions drive more. People in Lakewood walk more, drive shorter distances and have access to transit. In short, they have lower transportation costs.

Let’s figure this generously. The Avon family works in suburban Westlake, so does the Lakewood family. Their commutes are equal. 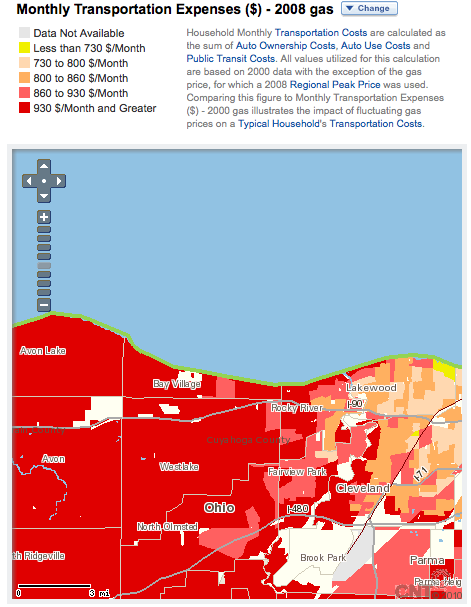 You will see in the above chart that the average Avon family is spending $200, give or take, more per month than the average Lakewood family. That’s $2,400 a month, or about $400 more than the tax burden of living in Lakewood, plus times saved.

Lakewood, even with its high taxes, is a bargain compared to Avon, especially if you value your time.