Construction of the Taj Mahal used up workers “like cattle,” according to Kipling. St. Peter’s Basilica was paid for by indulgences. Fourteen workers died in order build the Empire State Building in just 410 days. Must so many public works be built on top of scandal? Well, yes, at least in emerging global centers with readily exploitable migrant labor forces. We are in the midst of a breathtaking round of mega-project construction, and it is happening mainly in Asia and the Middle East. China and the United Arab Emirates are leading the movement, and neither is known for being labor friendly, to put it mildly. 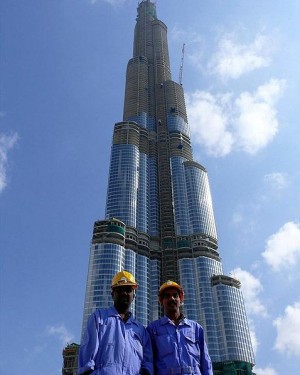 Construction workers in front of the Burj Dubai in 2008.

The world’s tallest building by far is in the UAE. The Burj Dubai will be finished this year and has already topped out at more than 2,600 feet. Dubai plans to have six of the world’s 20 tallest buildings by 2020, including one that will tower over the Burj. It is a construction boom so vast that it requires a population of 500,000 migrant laborers to live in a city of just 1.5 million. Most of them are poor men from South Asia who enter the country with thousands of dollars in debt to private recruiting agencies, which can take years to pay back. That is, when they actually do get paid: Employers commonly withhold wages arbitrarily.

Working conditions for migrants in Dubai are appalling. The government reported 39 people dead from workplace accidents in 2005 alone, which is likely to be a conservative estimate. This maltreatment caused a riot by 2,500 fed up laborers working on the Burj Dubai, which temporarily halted construction in 2006. That at least forced the government to acknowledge the problem, which so far has only amounted to lip service.

China, the epicenter for some of the 21st century’s most dramatic architecture, essentially follows the same pattern. Beijing’s air terminal, completed in time for the Olympic Games, is the world’s largest building; The recently completed Shanghai World Financial Center stands 1,600 feet and is the tallest building in China (for now; the 2,000 foot Shanghai Tower is scheduled to take its place in 2014). This might just be the early phase of development in Chinese cities. The Council on Tall Buildings and Urban Habitat reports that there are currently four more projects underway in China that will be taller than the Sears Tower. This begs an important question: What are these projects really costing? Last year, Beijing’s $40 billion development extravaganza for the Olympics awed a Western media that seemed blithely unaware of the system of abuse that made it possible.

As with Dubai, the construction booms in magnet cities like Shanghai, Beijing and Guangzhou flourish on migrant labor, but from China’s own rural interior instead of foreign countries. There are 150 million rural laborers living in cities. The cities count on them to toil cheaply and without complaint. Like foreign laborers working in Dubai, rural migrants living in Chinese cities are second-class citizens. China’s system of legal registration for urban residency—designed to slow the deluge of people flooding into cities—also prevents undocumented migrants from using local services or redressing grievances with exploitative employers. As a result, employers can shrug off existing labor laws with impunity, just as they have done in Dubai. Workers are chronically denied wages, and are deterred from collecting accident and medical insurance despite potentially deplorable workplace safety standards. Any widespread complaint by labor invites swift repression; strike-breaking violence in Chinese cities has left several workers killed.

This era’s mega-projects are, if nothing else, colossal ornaments on the metaphorical hoods of these emerging commercial powerhouses. Cities like Shanghai and Dubai that were once subject to humiliating Western interventions are now poised to compete with the likes of New York, Paris and London in the global economy. This isn’t so different from the audacious construction in Western cities during their own formative periods; there, too, the migrant system flourished. For instance, most of the underpaid laborers who risked their lives to make good on Empire State Building’s breakneck construction schedule were either European immigrants or Native Americans brought in from the reservations.