The magnitude 9 Tohoku earthquake and tsunami that devastated Japan one year ago also jolted us awake here in the Pacific Northwest. As we watched the disaster unfold in vivid detail on the news, how could we help but wonder: What if it happened here?

The offshore Cascadia fault, stretching from Northern California to beyond Vancouver Island, is capable of generating an earthquake of the same magnitude as Tohoku. But for Seattle, a potentially more dangerous fault lurks right below our feet. The Seattle Fault runs east-west just south of downtown, yet we did not know our city straddled an active fault until the 1990s. It is capable of generating up to a magnitude 7.7 earthquake, many times smaller than a Cascadia megaquake, but possibly more deadly, because the quaking would occur directly below a densely populated area.

Looking at the past teaches us about present dangers. Geologic evidence suggests that last time the Seattle Fault ruptured, sometime around 900 A.D., it unleashed chaos across the entire region.

Imagine it: A typical day on the shores of Puget Sound 1,100 years ago. Gray clouds are hanging low; mist is floating in the branches of towering Douglas firs. Perhaps in a clearing by the shore, near present-day West Point in Seattle, Coast Salish people husk clams and prepare fish.

Unknown to the Salish, for generations, tectonic forces have been silently building up stress on a fault cutting deep into the earth below their feet. At this moment, the stress finally exceeds the fault’s strength. Suddenly, the two sides of the fault begin to rip past each other, the rupture moving at more than 6,000 miles per hour. It slices from present day Alki point, down more than 10 miles below the surface, as far east as the Cascade foothills, and west across the Sound to what is now known as Bainbridge Island — all in a matter of seconds — sending off seismic waves in every direction.

Chaos erupts on shore. Violent shaking knocks everyone off their feet. Shoreline bluffs disintegrate with a roar and slide into the water splintering trees and filling the air with dust.

Less than a minute later, the ground stops shaking — but it’s not over. Just to the south, the shifting masses of rock underground pushed the bottom of Puget Sound up along the fault by several meters. The water above it has little choice but to follow its seabed — a rip opens in the surface of the water. As the water rushes to equalize itself, it sends a tsunami hurtling in the direction of the disoriented Salish people. They see the churning brown water suddenly suck away from the shore, leaving fish flopping in the mud and seaweed. Then the angry waters surge back in and keep rising. The Salish and their settlement are swept inland and then sucked out in a tangle of rubble to the deep cold waters of the Sound. A layer of sand and debris remains where a settlement had been moments before.

Meanwhile, along the shores of Lake Washington, violent shaking loosens entire hillsides. In some places, the trees stoically ride the sliding hillside upright to their resting place under the waters of the lake. They will remain there, an underwater ghost forest, preserved in the cool waters of Lake Washington, long after the remaining trees on land are cut down by newly arriving groups of people for lumber.

The Salish people who survived the quake passed on warnings of that day in tales that are still told today. But otherwise, the quake was forgotten — until just 20 years ago, when geologists deciphered the evidence left behind and revealed to the public that a catastrophic shallow magnitude 7 to 7.5 earthquake devastated the area over 1,000 years ago. And that it could happen again.

The clues came together from five independent teams of researchers. One group used carbon dating of marsh, peat and debris in beach deposits to date the sudden uplift of shoreline at Restoration Point on Bainbridge Island to between 500 and 1,700 years ago. Another found deposits from rock avalanches on the east side of the Olympic mountains that had dammed streams, preserving dead trees whose rings could be used to date the landslides to about 1,000 to 1,300 years ago. Scientists also found lake-wide layers of mud deposits in Lake Washington from landsliding that dated to the same time as the death of the submerged forest, both about 1,100 years ago. The rings of those trees showed that the forest there died no more than half a year from a Douglas fir log preserved in tsunami deposits found near West Point on Magnolia — not far from archaeological evidence of a Salish fishing site, also buried in tsunami deposits. 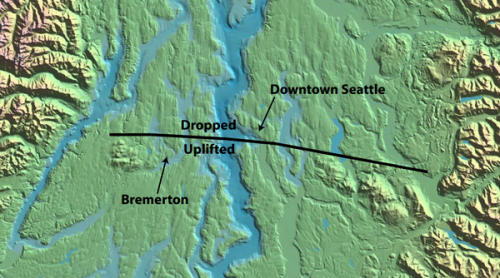 Evidence accumulated. It became clear that an extreme tectonic event caused widespread chaos around the Puget Sound region sometime around 900 A.D. “The tree-ring match between West Point and Lake Washington provided evidence that is uncommonly exact, geologically” says Brian Atwater, a researcher at the University of Washington for the U.S. Geological Survey, who was involved in discovering the West Point tsunami deposits. The five groups published their findings together in the prestigious scientific journal, Science, in 1992, and subsequent research has given further support. Now it is nearly unanimously accepted in the scientific community that Seattle was unknowingly built directly on top of a large fault.

Since that ancient quake, stress has been reloading on the fault for over a thousand years. The interval between large earthquakes in the Seattle Fault zone prior to the 900 A.D. event has been as short as 200 years, and as long as 12,000 years. Consequently, no one knows if the Seattle Fault is due to rupture tomorrow, or in a few millennia.

But now half a million people live directly above it. Mansions are perched on steep hillsides. Entire neighborhoods are nestled in what we now know are old landslide scars. Most buildings were built before building codes were updated to take into account the Seattle Fault in 2000. What is going to happen when tectonic forces push the fault over its threshold again? Is it worth betting that the fault won’t rupture in a repeat event while Seattle is still here?

At the end of March, the U.S. Geological Survey will hold a meeting to discuss what our observations of Tohoku and other recent major earthquakes mean for earthquake hazard in the Pacific Northwest. The findings will be incorporated into updated seismic hazard maps for the region and the changes will be reflected in new building codes within the next few years. However, in most cases, Seattle does not require old buildings to be retrofitted to match new building codes. And no building code can guarantee that a bookshelf won’t fall on someone’s head because they didn’t anchor it to the wall, or didn’t “drop, cover and hold” when they felt the earth begin to shake.

Active geology is exactly what makes Washington such an interesting and beautiful place to be, but we have to learn to live with the consequences. It is not yet possible to forecast earthquakes — it may never be — but the one thing we do know for sure is that big earthquakes happened here in the past, and they will happen again. All we can do is be prepared to ride them out.

Kate Allstadt is a Ph.D. student of seismology at University of Washington and a seismologist with the Pacific Northwest Seismic Network.