The town of York has sometimes been taunted for its blue-collar cultural practices, including a cuisine wherein “pawnhaus” (scrapple) is central, and for being a sort of socially backward cousin to Philadelphia. But York has been undergoing a series of transformations in the last few years, including gentrification by the professional class: Towering housing developments are being erected speedily, attracting hordes of professionals from the likes of Baltimore and Washington, D.C.

There are other transformations, including a very recent one that has put York in partnership with Canadian technology company Ostara. In September, Vancouver-based company Ostara Nutrient Recovery Technologies, Inc launched a facility at the York Waste Water Treatment Plant. The Ostara facility extracts nutrients such as phosphorus and ammonia from waste water. It then converts the nutrients into a slow-release, crystalline fertilizer called Crystal Green.

The York Waste Water Treatment Plant provides wastewater services for more than 75,000 residents in York and five surrounding municipalities, and processes more than 26 million gallons of wastewater per day. The new facility, which is only the third of its kind in the United States – the others are in Suffolk, VA and Tigard, OR – will extract nutrients from all of that dirty water. 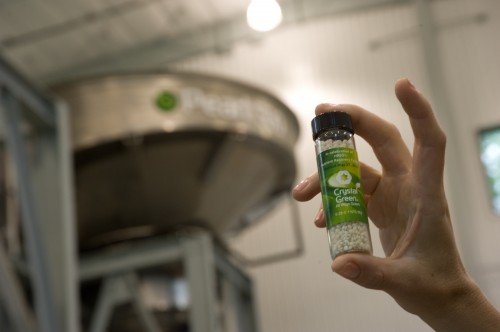 Ostara’s facility is part of a partnership between Ostara and the City of York. The company finances, designs and builds nutrient recovery facilities at wastewater treatment plants. Cities then agree to pay a monthly fee to Ostara. (The Tigard plant also invested $2.5 million in the Ostara facility.) The city or municipality gets a percentage of revenue from the sale of the Crystal Green fertilizer, which can be applied to the balance they owe Ostara for nutrient recovery.

“This public–private partnership between Ostara and the City of York is a creative approach to helping wastewater treatment facilities deal with the operational and environmental implications associated with the challenges of an overabundance of nutrients,” said Phillip Abrary, Ostara’s President and CEO. Apparently the World Economic Forum agrees with Abrary. Ostara was named a 2011 technology pioneer at this year’s Forum.

The major market for Crystal Green is turf, with nursery second and specialty agriculture third. Debra Hadden, the company’s director of corporate communications, said Crystal Green distribution partners are located across the country, including JR Peters in Allentown, PA. According to Hadden, Crystal Green is currently being used in several thousand acres of golf courses, athletic and playing fields and landscape companies and over 50 key plant nurseries in the Oregon and Chesapeake Bay states.

Earlier this year, the company partnered with a treatment plant in Suffolk, VA, and in 2007 with plants in Tigard, Oregon, and Edmonton, Alberta, Canada. By the end of September 2010, the company had landed its first partnership in Europe, at London’s Slough Sewage Treatment Works, located within the Thames River watershed. 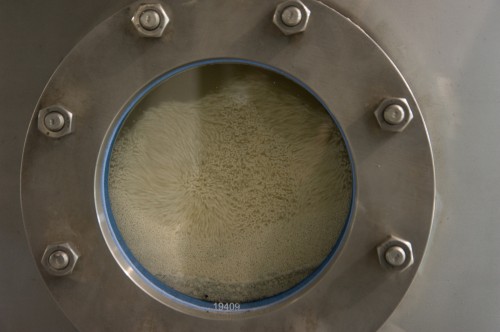 According to some, Ostara makes lofty claims beyond just its nutrient extraction. It calls its Crystal Green fertilizer “the world’s first renewable and environmentally safe fertilizer.” The company and product have been endorsed by Robert F. Kennedy, Jr., an environmental advocate and attorney. Kennedy is also an Ostara board member, and spoke at the York facility launch, alongside Pennsylvania Governor Ed Rendell. Ostara also partnered with Audubon International, headed by environment advocate Kevin Fletcher, on its Sustainable Communities Program. Despite the stamps of approval by Kennedy, Jr and Fletcher, others are skeptical.

John Stauber, author of the 1995 book Toxic Sludge Is Good for You! as well as coordinator of the new organization Food Rights Network, says he is “extremely dubious” of Crystal Green’s purity for use in food crops. “Sadly, history is littered with technologies that promised to separate beneficial nutrients from all the hazardous material in toxic sewage sludge. It would be nice if this technology ultimately turns out to be the exception but that is highly unlikely.” Stauber says that the endorsements of Crystal Green by Kennedy and Richards fail to impress him, “since neither of them nor their organizations has opposed growing food in toxic sewage sludge.”

In making its fertilizer crystals, Ostara employs a different process than wastewater treatment plants employ to create biosolid fertilizer, a fertilizer derived from human waste solids and wastewater, which has been applied to American food crops for close to 20 years. Nevertheless, the contaminants contained within waste give pause to Stauber. The use of biosolids, also referred to as sewage sludge, has long been controversial because it has been found to contain traces of pollutants, such as heavy metals and antibiotics.

Dr. Hale told Next American City in a recent email that he too wonders if there may be traces of contaminants in Crystal Green, but also clarifies that it is, “difficult to evaluate the potential environmental repercussions without [samples] to evaluate.” He says, “Knowing little to nothing about the extraction process, I would be interested if it might concentrate metals. That is not in the context of a criticism, but rather an inquiry.” (Neither Stauber nor Hale are involved with any testing of Crystal Green nor did their testing of biosolids have anything to do with Crystal Green.)

Asked about the safety of Crystal Green for use in food crops, Phillip Abrary said in an email, “The production of Crystal Green enables nutrients from wastewater to be recovered in a form which is of much higher value than biosolids. Crystal Green is highly pure – significantly more pure than conventional mineral fertilizers. It therefore does not result in the application of unwanted compounds (e.g., heavy metals) as biosolids can. The reason is that Crystal Green is manufactured in a controlled process which produces a consistent quality product, and therefore is regulated as a commercial fertilizer product, not a waste.”

Ostara has conducted independent laboratory analysis on its Crystal Green and concluded that the fertilizer contained “non-detectable or negligible heavy metals or pathogens.” In order for the product to be sold commercially in the U.S., it must apply for fertilizer registration on a state-by-state basis, and has already registered with 18 states and in Canada. Additionally, the United Kingdom’s Environment Agency and Trading Standards Service have approved the product for sale within Britain.

Notwithstanding the questions of its level of purity by some, from the perspective of treatment plants, nutrient recovery is a win-win. Mark Jockers, the government and public affairs manager at Clean Water Services’ Durham Advanced Wastewater Treatment Facility in Tigard, Oregon says the partnership with Ostara “is paying dividends for both the Tualatin River and our ratepayers. The Ostara process has helped cut chemical cost by more than 30 percent; reduced biosolids hauling costs by 10 percent; and is generating revenue for the utility.” Jockers says Clean Water Services is “on track to get a payback” on their $2.5 million investment within 5-7 years.

Processing of human liquid and solid waste leaves a hard, crystalline nutrient buildup called struvite in pipes and valves, which clogs them. The main expense of that phenomenon is the cost of struvite removal. Nutrient removal is also crucial in wastewater treatment because the release of excess nutrients into waterways, chiefly phosphorus and nitrogen, has been the primary villain of coastal ecosystem destruction. Accordingly, environmental regulations in some watersheds have set daily limits for the quantity of phosphorus and nitrogen that can be released by wastewater treatment plants. (Runoff from agricultural fertilizer is also a chief contributor to ecosystem destruction. Ostara notes that its fertilizer is slow-release, distributing its nutrients into plants over a period of nine or ten months, which helps to combat nutrient excesses in waterways.)

Nutrient excesses, referred to as nutrient pollution, feed the growth of algal (algae) blooms, which in turn deplete estuaries and coastal waters of oxygen. The result can be loss of life for fish and shellfish, which also has economic repercussions. Coastal zones that suffer from low oxygen levels, or hypoxia, are referred to as “dead zones.” For years the Chesapeake has suffered from one of the largest, most prolonged dead zones in the country, but is also making a comeback via ecosystems restoration projects.

The York Waste Water Treatment Plant is located within the Chesapeake Bay watershed. With its newfangled partnership with Ostara, it expects to meet its daily nutrient limits. The Bay is the largest estuary in the United States and the producer of about 500 million pounds of seafood annually. Its watershed is fed by water bodies from six states, including Pennsylvania, and more than 150 rivers and streams.

Whether or not Ostara’s Crystal Green fertilizer is truly “environmentally safe” for food crops is unproven at the moment, because the product is so new and, consequently, its long-term effects are unknown. Until then, the product will help to do the work of recovering nutrients, especially phosphorus. And, with the world’s phosphorus supplies quickly dwindling – the Global Phosphorus Research Initiative expects phosphorus mines to be depleted in about 30 to 40 years – that might not be such a bad idea.

Editor’s Note: This article has been amended from its original version to reflect factual changes.