This piece originally appeared on Greater Greater Washington. All photos by the author.

Anacostia isn’t the only place neighborhood in D.C. with squatters living in vacant housing properties (or “abandominiums”). Canvassing 13th Street NW in Columbia Heights for information on a forgotten murder, I found an unlocked front door to the Warner Apartments, one of D.C.‘s most historic abandominiums.

Within minutes a friend and I were on the roof of this Colonial Revival-style apartment building on the 2600 block of 13th Street NW. We looked over a neighborhood that, in less than 10 years, has been transformed from one of the deepest gang and crew-affiliated areas of the nation’s capital to a landing pad for D.C.‘s newest arrivals.

Completed in the 1920s and formerly known as the Alden, Babcock and Calvert Apartments, the Warner Apartments at 2618-2622 13th St. NW were added to the National Register of Historic Places in 1990.

In late 1987, the Warner was the first of a dozen renovated apartment buildings to be completed as part of the city’s “$15 million plan to reclaim vacant, privately owned, disintegrating apartment buildings and turn them into housing for low-income District residents,” according to the Washington Post in November of that year. “By the time the last group of tenants left four years ago, a succession of landlords, tenants and city authorities had managed to reduce the once-graceful red-brick structure in Columbia Heights to an uninhabitable mess,” said the article.

In February 1987 developer Joseph G. Kisha, in partnership with the Department of Housing and Community Development (DHCD), acquired a “Rental Rehabilitation Loan Program Leasehold Deed of Trust, wherein the parties acknowledged” Kisha’s “indebtedness to the District of Columbia government for a $220,000 interest free loan to finance the purchase and rehabilitation of the housing accommodation as rental units for low to moderate income,” according to records of the Office of the Tenant Advocate.

Wasting no time, the next day Kisha filed a Claim of Exemption Form with the Rental Accommodation and Conversion Division within the Department of Consumer and Regulatory Affairs, asserting that the apartments were “exempt from the rent control provision of the Rental Housing Act because the rental units were owned or subsidized by the District government.”

Along with the city subsidized mortgage, Kisha argued that the property was additionally exempt from rent control because in 1984, when his company first expressed interest in its purchase, it was vacant and had been vacant up until the time he requested the exemption from rent control. The city agreed and approved his exemption. All 44 of the Warner’s renovated units would go to low-income residents receiving federal rental assistance.

View of Columbia Heights from the roof of the Warner Apartments.

According to the November 1987 Post article, Kisha had concerns that “not enough attention ha[d] been directed at the time when the initial rent subsidies expire.” He told the Post he and his business partner planned to own the Warner for fifteen years, but when the rent subsidies ran out, he was quoted as saying, “I don’t know what happens then.”

Fast forward to August 2006, less than twenty years after the Warner Apartments reopened, Kisha and his 2620 Limited Partnership was petitioned by the 2620 13th St. NW Tenants Association, who alleged that the Rental Housing Act of 1985 had been violated. Rents increased even though the units did not comply with housing regulations, tenants received “substantially” reduced services, and, the association argued, the property was not registered with the Rental Accommodation and Conversion Division.

Kisha sought to have the case dismissed with prejudice on the grounds that the Association’s complaints were based on the rent stabilization provision of the Rental Housing Act, from which the Warner was exempted.

In late July 2009 Wanda R. Tucker, an Administrative Law Judge, issued a Final Order in the nearly 3-year-old dispute. The Tenant Association’s petition was “dismissed with prejudice,” meaning the Tenant Association would be barred from bringing a future action on the same claim.

By December 2010 only four units remained occupied. Following the protocol of the 1980 Rental Housing Conversion and Sale Act, the remaining tenants were given the opportunity to purchase all three buildings. The asking price was just over $5,050,000. The tenants were prohibited from waiving their right to receive the Offer of Sale while their failure to purchase the buildings ensured their eventual eviction.

Last December the 2620 Limited Partnership sold the three buildings and got their money. New York-based Aria Partners, LLC, purchased the property for $5,018,000, a price representing more than $114,000 per unit. In press releases Aria pledged to “substantially renovate the building[s] to [their] historic standard while preserving 20% of the units as affordable.” 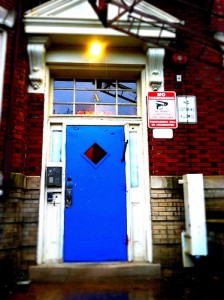 Upon entering building “A,” a friend and I are greeted by two fire extinguishers coated in a thick layer of dust. Some loose construction materials lie in the corner of the vestibule. I step up the stairs into the hallway, a door to units on my right and left.

I shout out, “Uptown reporter in here!” The sound ricochets through the stairwell, down to the basement and up to the fourth floor.

I don’t hear anything or anyone, neither does my friend. A solitary light bulb, in a no-frills hallway chandelier overhead, gleams through the desolate dwelling.

The door on the left is unlocked, opening into a unit with three windows that overlook 13th Street NW. To the right is the intersection with Euclid Street NW. “There goes MPD,” says my friend, “Rickey,” as officers from the Metropolitan Police Department cruise south on 13th Street NW.

Rickey, in his early 50s, grew up on nearby Sherman Avenue NW. He has fond neighborhood memories of “just trying to stay alive despite my best efforts not to.” Although he now lives “on that southside,” his “heart is always with the uptown.”

“I might be too street to tweet,” he says, “but I’m up on the only news that really matters; that corner news of what’s happening now.”

Rickey claims “everyone knows you’ve always been able to get high here whether it’s vacant or when they got people. This place has never really been run right; it’s always been a problem.”

As we walk through the hallways and creep into deserted units, we’re careful to watch our steps on the wood floors going to pieces. The non-bearing walls have all been knocked down, and drywall accumulates in piles in many of the units.

With scant evidence of squatters on the first and second floor, we discover verification on a third floor unit overlooking 13th Street that someone has been here within the past week. “Yep.” Says Rickey. “If I was still getting high this is right where I’d do it. That’s what they were doing.”

There are a couple different newspapers scattered about from the same day last week, some cigar guts and discarded wrappers for Black & Milds and cigarillos, used to roll up weed.

“To a lot of folks this place is too hot,” Rickey says as we look down to the street below. “All these new people walking around, acting like ain’t nothing wrong in the world. You better watch your back if you dip in here, these people will call the police on you quick, fast and in a hurry.”

Rickey pulls out a cigarette, lights it and laments, “You know when I was coming up, yeah, there was a lot of guns and knives, and all those drugs around but it was different. The way it feels now, it doesn’t feel real anymore.”

A metal grate blocks the stairwell to the roof, but it’s not locked. We pass boxes full of binders chronicling years’ worth of work orders as we walk up the staircase.

We’re now on the roof. I snap a quick picture. We head back downstairs but not before Rickey, with a fresh cigarette dangling from his mouth, says, “I know some folks in the market for an abandominium, I’ll make sure to spread the word if they don’t know already.”