The high-rise hotel and office buildings of Bunker Hill have vanished.

The perennially soon-to-be-reopened Angels Flight “shortest railroad in the world” is gone.

And the art museum has disappeared, same as those graceful Victorians that two generations ago peppered this same downtown Los Angeles acreage.

Instead of all the above, Bunker Hill — some of Downtown L.A.‘s choicest real estate — is back to being just a hill. Or, at least here inside a Downtown art gallery — a model-builder’s representation of that topography, crafted out of window screen, construction paper and moss.

Rojas’ work is titled, /i>Imagining A Sustainable Downtown LA Through Model-Building. “What you’re looking at,” Rojas indeed said one recent weekday, “is a future idea for a sustainable, livable Downtown L.A.”

The model is fingers-and-fists tall and eight-feet-long by four-feet-wide; it rests on two foam boards that top a white table. Rojas towers over the streetscape like Godzilla over Tokyo. Bunker Hill, as described above, takes up one corner of the model’s grid, which is bounded by Figueroa, Los Angeles, Eleventh and Temple Streets.

The work’s “buildings” are composed of Legos, Jenga pieces, Scrabble tiles, bottle caps, peppershakers, a translucent Boeing corporate paperweight, and the like. About 2,000 of these knickknacks were incorporated into the work a week into the gallery show. Fifteen small tubs filled with more tchatches stand by, intended for gallery visitors to get their Rem Koolhaas on. “This is a way of really attempting to engage people,” Rojas says. “Having fun with the city and kind of visualizing the city, giving them three-dimensional tools to play with, because cities are three dimensions.”

Rojas does what he does in part because he thinks urban planners err in how they deal with the public. “The planning profession has become more of a profession of land use policemen, telling people what they can’t do and how to regulate that, rather than be visionaries,” he says. “People like cities – people love cities, in fact. It’s just that we’ve made it really dry and boring, and [so] people hate planning.”

Not long ago, Rojas’ 727 Gallery hosted a Los Angeles River variant of the model. (Rojas is soon scheduled to debut a Hollywood version.) Rojas also leads even model-building workshops at academic institutions and for community groups. He recalls one such happening held in a southeastern Florida city with a diverse population of 4,000.

“I did a workshop in a town called Fellsmere… ,” he says. “You could feel the racial tension there. But through the whole modeling process, it broke down the barriers.” Rojas explains that in his experience, recent immigrants tend not to speak up at public meetings due to their limited English language skills. Building a model is, obviously, a non-verbal exercise. “Everybody has a fair share at putting input in,” he says.

On his downtown model, Rojas advocates for public transit, cycling paths, and pedestrians. He places twin red stripes along three east-west and one north-south artery. The strips — so-hued in homage to the city’s late, great Red Car streetcar system — rest atop construction paper representing greenways. There are no parking lots in this downtown, but plenty of pocket parks and paseos. As intended, gallery visitors have since come along to play Mothra, or maybe Jane Jacobs, to Rojas’ ‘Zila, or Pierre L’Enfant. That means, apropos of the real world, this simulacrum evolves.

Rojas’ original simple green construction paper representing L.A.‘s overdue Grand Avenue park now boasts two tall buildings plus playgrounds — and a pledge from the buildings’ “developer” to pay for the park. Another visitor pined for historic preservation. So, Rojas says, the man added costume jewelry to craft an Art Deco structure. Another man bent down to check what was underneath the table. “No subway yet,” Rojas said. Someone else added moss and declared a “green roof.” 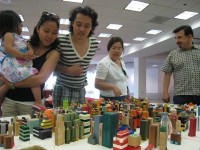 Another participant stuck two miniature glass elephants in Pershing Square — which already is a concrete-laden, proverbial white elephant of a public space. Was this a plea for a pachyderm petting zoo? A new Banksy happening? Irony? Rojas isn’t certain, but in his experiences, model-building does turn out to be a sort of Rorschach test.” Sometimes when you do these exercises,” he says, “just by hearing people’s comments, it tells you a lot about [them],” he says. “‘I’m building the Grove.’ ‘I’m building Santa Monica.’ ‘I’m building the beach.’ People give so much reference to stuff that they know.”

Consider one participant, a preacher, who Rojas says participated in the Florida workshop. “He built a city in like fifteen minutes, and it was all high-rises, and it was all perfect. It’s like he built New York,” Rojas says. “You look at what he made, and you think, this guy has a mission. This guy has a really strong agenda of what he wants to do in life, and where he wants to go. He just built it really quickly and that was it.”

As for Rojas, he too has a mission: “[To] create the tool to engage all members of the public in an interactive exercise that generates ideas and dialogue to develop a vision for their urban future.”

Next Monday:
Live from City Hall — Why there’s no “point” to Los Angeles’ contemporary high-rises.