Last week, California governor Arnold Schwarzenegger signed Senate Bill 375 into law, thereby mandating that the state curb its rampant sprawl patterns. The bill also seeks to cut greenhouse gases. Is it too good to be true? 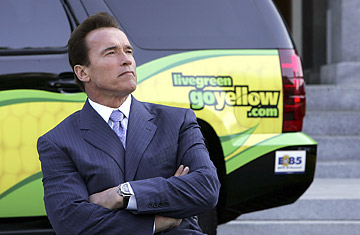 When I was a teenager, I was a bitter vegetarian. I wanted to recruit more people to the pro-tofu cause, yet I criticized those who signed onto the movement for trendy or political reasons. (Not realizing I was such a person, of course. I gave up the diet when I woke up one day, hungry for a hamburger.) My cousin, also a vegetarian at the time, explained to me why this was stupid. “In the end, it still means that the movement you care about is stronger,” she said. “Who cares if someone gives up meat because a boy they like is in PETA? You still win.”

The same could be said about California governor Arnold Schwarzenegger’s reputation for being an environmentalist. He owns five Hummers, and Time magazine named him one of 2008’s “Heroes of the Environment.” To his credit, one of the Hummers runs on hydrogen, and another on biofuel. But is he doing it for votes? Does he truly care about global warming? I don’t believe it matters. The man enacted the first statewide cap on carbon emissions and the first statewide green building code, and last week he added another green star to his proverbial refrigerator: He signed the first statewide bill that proposes to cut greenhouse gases by reducing urban sprawl. Perhaps Time magazine will name Schwarzenegger one of 2009’s “Heroes of Urban Development.”

In California, the land of long commutes and distant suburbs, many argue that this is a much-need law. Passenger vehicles are responsible for producing one-third of the state’s carbon dioxide emissions, largely because people are moving further and further away from their jobs. The number of miles driven by Californians has increased 50 percent more quickly than the state’s population growth.

The bill seeks to discourage such rampant sprawl. After the government determines the amount of emissions each of California’s 17 metropolitan planning areas produces, it will set reduction goals for 2020 and 2035. Local governments will then propose housing development, mass transit and road-building plans that reduce driving and cut emissions accordingly. One obvious solution, which The New York Times advocated for, is to build housing closer to jobs.

Of course, there’s a cost to such development. The Toronto Daily Star recently wrote an article about the century-old buildings that are destroyed when new condominiums go up. As density increases, history is sometimes lost and people are often displaced.

What do you think? Should other states take heed and pass similar bills? Does California’s law provide enough oversight? Is Schwarzenegger drinking too much of the green Kool-Aid? You can read more about the issue here and here.