The first in a three-part series on the new report on pedestrian safety by Transportation for America: “Dangerous by Design.” 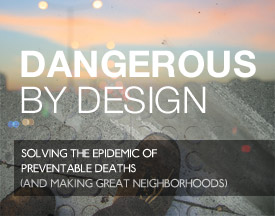