A new study finds that curbing violent crime remains the single most important issue for Philadelphians. The topic will likely define the second term of the city’s reasonably popular mayor.

Though violent crime nationwide has been steadily decreasing over the past half-decade, Philadelphia has the lamentable distinction of seeing murder rates remain high. Though down from the staggering 392 homicides reported in 2007, the city closed out last year with 324—about 20 more people murdered than in either of the two preceding years.

This likely accounts for why Philadelphians still view crime as the most serious problem facing the city, according to a study released today by the Pew Charitable Trusts.

Reducing violent crime ranked far and away as the highest priority for city residents, who put it above topics like improving education and job creation as the most important issue of the next four years. Anti-crime initiatives very well may come to define Mayor Michael Nutter’s second term, which began last month.

Though Nutter—who took first office in 2008 and was reelected in November—maintains a favorable reputation, most respondents credited his success to have been in areas like green initiatives and making government more open. Nearly half approve of his handling of crime, and a whopping 88 percent favor a recent law imposing a youth curfew in the city. Still, over one-third of Philadelphia residents believe that the city has gotten worse over the last five years. 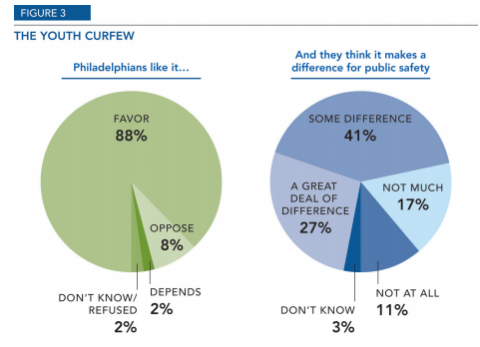 One more interesting tidbit: Nearly half of the study’s respondents say that racial and ethnic tension affects their neighborhood “a little” or not at all, and almost three-quarters of Philadelphians say that ethnic- or racial-related problems are “not very serious.” For one who follows the debates over development in gentrifying areas like Point Breeze—one community meeting there actually came to blows—this optimism isn’t always apparent.