Newark’s mayor announces a slew of new initiatives at his third annual State of the City address, many tied to famous donors.

Speaking volumes louder (and standing a foot taller) than anyone else in Newark Symphony Hall last night, Newark Mayor Cory A. Booker gave an hour-long speech that touched on everything from savings initiatives to affordable housing to the establishment of community courts. Predictably, though, the announcements that drew the biggest cheers from the adoring crowd were the blockbuster partnerships that Booker’s own national celebrity has helped him forge. 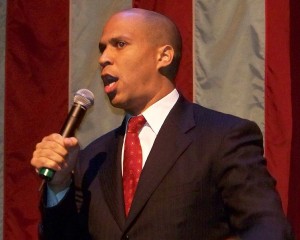 Famous names littered the speech, most notably that of Oprah Winfrey, who recently announced that she was donating over a million dollars to city projects like Integrity House, where women overcoming substance abuse can recover and reconnect with their children. Tiki Barber is donating recreation equipment to parks, and the Heinz Foundation, headed by Teresa Heinz Kerry, Senator Kerry’s wife, is partnering with the city to create Newark Rx, a pilot program to give uninsured citizens immediate access to pharmaceuticals. An enthusiastic Booker also announced that local boy made good, Shaquille O’Neal, would convert an aging movie theater into a state-of-the-art dinner movie theater— at the same time he’s funding the construction of a 25-story residential tower. Finally, Newark will soon open HELP USA, a supportive housing facility largely funded by a man who Booker said, “doesn’t give love a bad name, he gives it a good name,” Jon Bon Jovi.

By the end of the night, Mayor Booker had asked nearly every person in the audience, it seemed, to rise up and be acknowledged, but perhaps the one he saved the most enthusiasm and the warmest welcome for was Governor Jon Corzine. Hailing him as “my leader,” Booker encouraged a slightly reluctant crowd to applaud for the governor, who is up for re-election this year and is struggling with his popularity. “I have an incredible partner in Jon Corzine, who does not get the recognition he deserves,” said the mayor, thanking the governor for creating business tax cuts, and in particular the Urban Transit Hub Tax Credit. There are rumors that Booker may be Corzine’s running mate— rumors Booker denies— but their relationship seems to be more than intact. Celebrity partnerships are one thing, but strong relationships between city and state officials are what really effect change.

Housing in Brief: Cities Push Back Against California’s Rezoning Laws

Housing in Brief: Los Angeles County May Give Tenants First Chance to Buy Their Homes

Newark Restaurants Have Served 1 Million Meals to the Hungry

Newark Hopes a Land Bank Will Help Revitalize its Neighborhoods