The Washington Post reports that my neighborhood, Mount Pleasant is suffering from a plague of shuttered storefronts on its commercial strip, Mount Pleasant Street. Although it was roughly equal parts white, black and Latino in the last census, it appears the population is changing.

The Washington Post reports that my neighborhood, Mount Pleasant is suffering from a plague of shuttered storefronts on its commercial strip, Mount Pleasant Street. Mount Pleasant is, in my humble opinion, far and away the best neighborhood in Washington. Originally a street car suburb just north of trendy Adams Morgan and east of once-blighted but rapidly gentrifying Columbia Heights, Mount Pleasant has occupied the literal and figurative space between the two. With its charming, tree-lined blocks of century-old row houses to the west and denser, grungier apartment buildings to the east, Mount Pleasant has an unusual degree of diversity and integration for D.C. Although it was roughly equal parts white, black and Latino in the last census, it appears that gentrification has pushed the white proportion up and the black proportion down in the years since. Even so, Mount Pleasant Street has changed very slowly, with a mix of shops and restaurants that cater to the yuppie, immigrant and working class communities in roughly equal measure.

But, thanks to rising home values and rents, the lower-income communities are disappearing and the stores that cater to them are beginning to shut down. The trend was accelerated by a recent fire that decimated an apartment building on Mount Pleasant Street, pushing out 200 residents. And, as any retailer can tell you, closing stores has a snowball effect. Fewer stores means less foot traffic, which in turn means fewer customers for the businesses that do remain. The area’s wealthier residents hope that the excess bodegas and laundromats will be replaced with stores that cater to their tastes, such as upscale cheese and wine shops. Alas, with high rents but a soft economy and a credit crunch that makes it harder to take out a large loan to start a new business, no such stores have opened. 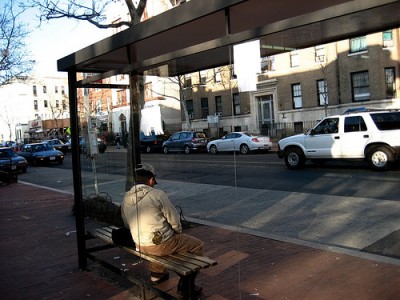 Personally I see part of the problem as a lack of a certain type of store in Washington. Growing up in Brooklyn, my neighborhood, Park Slope, was extremely similar demographically to the Mount Pleasant of today. It did not yet have the money or cachet to attract many fancy enterprises, but it had an upper-middle class community that desired certain products you could not find in the bodegas that catered mainly to the Latino community. What it had that did cater to yuppies, and some of their working-class predecessors, was a certain kind of immigrant-owned small business: Greek diners, Italian pizzerias, Arab news stands, Korean greengrocers, Irish butchers and bars. In time, small local book stores and cafes opened as well. Somehow, D.C. seems to largely lack the stores that could fill this retail sweet spot (although Mount Pleasant does have two healthy-seeming Asian-American owned dry cleaners.) I’m not sure why this gap exists — perhaps because there are fewer immigrants. In light of that, though, the options for replacing old Mount Pleasant, if you look to our neighbors to the south and east, seem to be corporate chain stores and the sort of loud bars that brings the bridge and tunnel crowd over from Arlington. Frankly, if the credit crunch keeps that at bay, I don’t mind.