In Oakland, where about 40 percent of childhood asthma cases are related to substandard housing stock, an effort is underway to revamp the city’s code enforcement efforts to focus on health and safety problems.

Children with asthma, infants exposed to lead paint and others suffering health problems brought on by living in substandard housing conditions may soon have a new ally in Oakland.

In the proposal—which has yet to be approved by a citizen task force charged with advising on the division redesign, as well as by the City Council—another major area of enforcement focus would require bank owners to clean up foreclosed properties.

“We’re looking at this as a great opportunity to serve the city as a whole,” said Margaretta Lin, appointed last July by the City Administrator to oversee the change efforts at Building Services. “Stepping back, we asked what are the big problems in Oakland that really need assistance from code enforcement. Looking at the data we have major problems with public safety, foreclosures and multifamily substandard housing.”

Those issues will ideally become the focus of enforcement efforts at the revamped Building Services, she said.

Approximately 60 percent of Oakland households live in rental units, according to U.S. Census Bureau data. But until now—and unlike most big cities—Oakland’s building code enforcement has not included proactively inspecting rental housing properties. Inspections only happened when someone complained.

Childhood asthma is a major health problem in Oakland, and 40 percent of childhood asthma cases are attributed to residential exposures, according to the proposal’s research.

Lin said the city is already working with the Alameda County Department of Health on a plan that helps families with asthmatic children determine what caused asthma and fix the causes. The city’s role would be both code enforcement and education about mold and other health dangers in buildings. For public safety code enforcement, the division would work with the Oakland Police Department in shutting down buildings that have been abandoned and are being used for criminal activity. 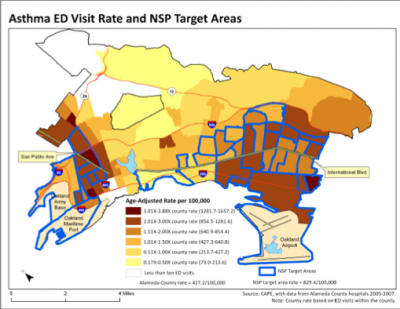 Asthma rates in Oakland. <a href=“http://www2.oaklandnet.com/oakca1/groups/ceda/documents/memorandum/oak034150.pdf

The “Proposed Program Design for Proactive Code Enforcement Operations“ is on the city’s website under Building Services.

For years, code enforcement by the city’s Building Services Division was complaint based, with inspectors going out to only properties about which a complaint was filed. The complaints tended to be about single family dwellings, duplexes or semi-commercial properties.

The grand jury in its investigation found the Building Services often went after marginal offenses, like overgrown bushes or fences being above a prescribed height, in an attempt to use code enforcement as a revenue generator for the city. It also found that inspectors used liens to warn property owners to comply rather than notifying them first that a problem existed. In numerous cases, the liens made the properties difficult to sell and the property owners would default.

All this happened while many of Oakland’s large multifamily dwelling units were rarely examined by code enforcement staff despite the high rate of asthma in the city.

The City Council responded to the grand jury’s highly critical report with a promise to revamp the Building Services procedures and approach to code enforcement. Among other things, it created a Building Services Improvements Advisory Task Force, which has been reviewing the city’s new proposal for a proactive plan based on health and safety and reducing blighted foreclosures.

At a meeting last week, members said they generally agreed with it. Some said they especially wanted to make sure that low-income renters had an adequate voice in code enforcement matters.