Part one of an interview with Jess Garz of Transforma, a collective of artists who have come together to consider how to structure, support, or promote creative strategies for impacting recovery in New Orleans.

From the June 7, 2008 observance of Plessy Day, an event co-produced by Transforma. Jess Garz

On Tuesday, April 13, Next American City and Transforma Projects co-presented an UrbanNexus talk, with The New Orleans Lens, during the American Planning Association’s 2010 National Planning Conference.

Transforma is a seminal, Big Easy-based, artists-conceived initiative certain to be studied for decades to come. That’s in part because of the degree of difficulty of the work – heading to a post-Katrina New Orleans. It’s also in part because of the national reputations of the project’s co-founders; as well as because of the care and rigor that went into the planning, collaborative execution and even the current “sunsetting” phase.

City / Culture: What is Transforma?

Jess Garz: We call ourselves a collective of artists – or creative professional thinkers – who have come together to consider how to structure, support, or promote creative strategies for impacting the recovery for New Orleans.

What were some key Transforma efforts?

We primarily supported projects in two ways – through three pilot programs, and later, through a Creative Recovery Mini-Grant Program. The intention of the pilot projects was to support three efforts that explored in unique ways the notion of community or publicly-engaged practices. HOME New Orleans was a university-neighborhood consortium. Fundred Dollar Bill was led by artist Mel Chin. And Plessy Park – the site where Homer A. Plessy was arrested in 1892 – was community-led, with the goal of designating the space as a historically significant site, or activating it a way that respects the lot’s history.

Transforma’s second support model is the mini-grant program. This was an open call, in three rounds. Any individual or unincorporated group could apply. The resulting projects included ceramics, photography, dance, theater, African dance, and youth workshops, and some exhibitions and publications. 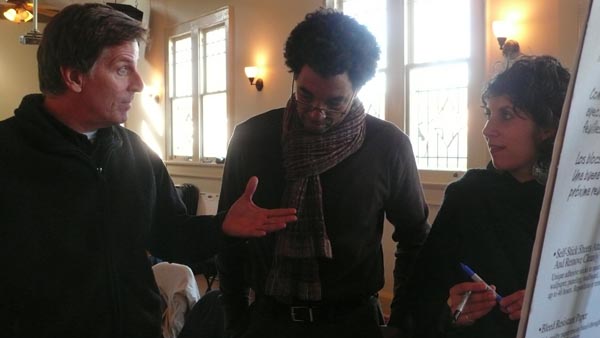 Whose idea was Transforma?

Robert Ruello is a New Orleans native and visual artist. He lived in New Orleans during, before, and after The Storm. And he was aware of Rick Lowe’s work at Project Row Houses in Houston, Texas. After The Storm, Robert was in New Orleans, trying to recover his personal and his professional life. And he thought of Rick. He didn’t really know why. He didn’t really know what he wanted from him, but he picked up the phone and called and said, “There’s work to be done in New Orleans, I think you’re a great mind, let’s talk.” Rick contacted a colleague named Jessica Cusick, who is the Director of Cultural Affairs in Santa Monica, California, and another colleague, the artist Sam Durant. They started traveling here in the early months of 2006, and through community meetings (called convenings), dialogue, conversation, and exploration, Transforma was born.

At first, they thought, “Maybe we’ll renovate a building, or we’ll create a community center, or we’ll support a large exhibition.” They quickly threw out those ideas because that wasn’t the feedback they were getting. People didn’t want that. They needed general support and recovery in a broader, more holistic sense.

What feedback did Tranforma receive from local officials?

We never walked into City Hall or into a community development agency and said, ‘Look we’re this initiative of artists and creative people, listen to what our solution is.’ We never lobbied, we weren’t confrontational. We just wanted to support people doing work. I think the successes of those projects — and some of them are on a micro-scale, within one block in one neighborhood or one classroom in one school – is how we proved to people that what we’re doing is worth the energy and time.

In my broader experience in post-Katrina New Orleans, the federal government proved within five or six days that they weren’t responding very well to the needs of this city. So you automatically had a population of people who were pretty skeptical about the ability of large agencies to support them, even for basic survival needs. Meanwhile, small grassroots neighborhood organizations, cultural organizations, and artist collectives started to do really significant work that filled the void. People came to rely much more on smaller neighborhood and locally-led groups as opposed to government.

Can City-Owned Vacant Lots Fill the Need for Park Equity in Houston?