Few projects stand out in the American imagination like Chicago’s Cabrini-Green. Built at the peak of Modernism’s popularity in architecture and urban design, the housing project was designed to be a glistening example of urban planning’s power to overcome the chaos of the urban slum. By the 80’s and 90’s, a short few decades later, it came to symbolize everything that was wrong with inner-city America: drugs, poverty, crime, teen pregnancy—you name it. Cabrini is so well known, you hardly even have to pick up a book to learn its story. You can just flip on the TV.

Good Times, the 70’s sitcom, was set in the Cabrini-Green homes. It was one of the first mainstream sitcoms to feature an all-black cast, and it was noted for its realism; the characters would have to deal with living in poverty, and racial discrimination, on occasion. Times were tough, but they were, well, good. 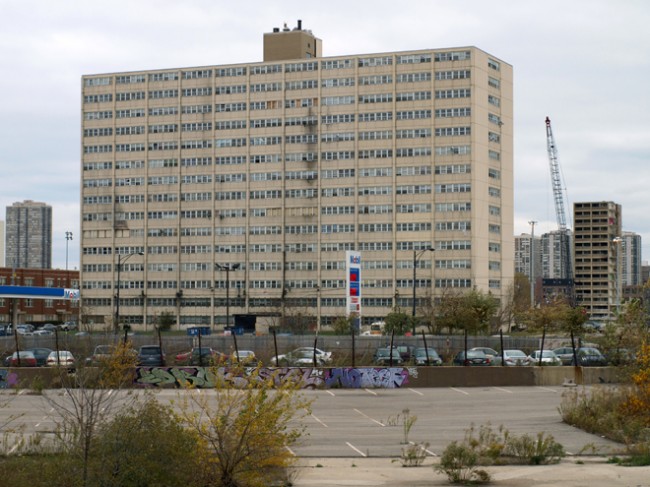 Fast-forward to 1992—the same year 7-year-old Dantrell Davis was killed by a stray bullet at Cabrini while he walked to school with his mother—and you might catch Bernard Rose’s Candyman on the big screen. Candyman is the story of a serial killer/ghost/thing-made-of-bees that haunts Cabrini-Green, killing residents, and anyone daring enough to say his name into the mirror five times. The movie follows a grad student, Helen, who is writing her thesis about urban legends, and believes the Candyman story to be just that—a way for poor people to explain away or mythologize the horrors of life in the ghetto.

In fact, Helen believes that the killer at Cabrini is enabled by the cheap design of the buildings. She happens to live in a fictional building in Chicago that was designed identically to Cabrini, and her bathroom mirror is attached to her neighbor’s bathroom mirror, providing a link between apartments, and a way of explaining the Candyman myth, and why bathroom mirrors play such a central part in the myth—Cabrini’s design enables crime, essentially. Helen turns out to be wrong—very wrong!—about this, and we find out that the Candyman is actually a ghost that is made of bees, and she eventually becomes him, in a bizarre third act in an already bizarre film. But that’s not the point, here, obviously.

Cabrini-Green is being torn down as we speak, for reasons that wouldn’t be foreign to Helen. Under what they call The Plan for Transformation, the notoriously mismanaged Chicago Housing Authority has revamped its image over the last decade, and with HUD’s guidance, they are renovating and building 25,000 units of public housing. The flip-side of this policy is the demolition of virtually every single high-rise project in the city. 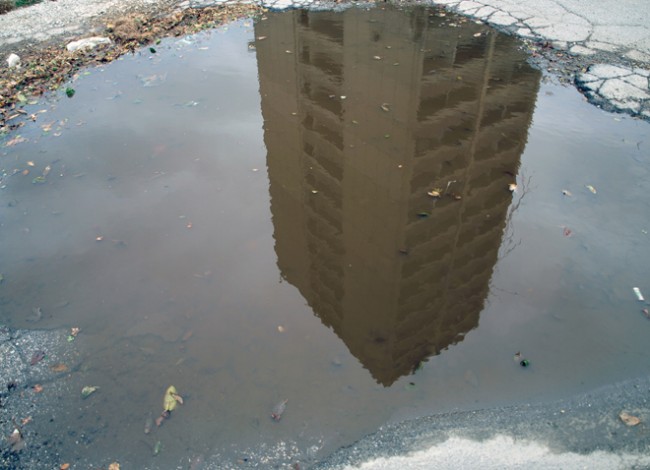 Just last week, residents of the 1230 N Burling tower—the last high-rise structure left in Cabrini—were removed by CHA authorities, so that demolition could be completed. I visited the site of Cabrini just a few weeks ago, at the tail-end of the Urban Nation road trip, to see the site myself.

It’s striking to see a monolithic, beat-up housing project tower by itself. Many architectural critics point out that this form of Modernist tower ignores its nearby context, that it’s out-of-scale with the neighborhood. While this is hard to refute, I’d add that housing projects tend to create their own context; when you see one of these towers, you see many towers. Either they present themselves at different angles, making for a wall of different depths and heights, or in a row, creating a rather oppressive, but rhythmic sight-line. Regardless, seeing one on its own highlights its lack of context; 1230 N Burling sits in a parking lot that is itself situated in an abandoned lot. About 100 yards from 1230 N Burling lies 1230’s very near future: a white tower about 80% demolished, re-bar cables poking every which way. Seen this way, on its own, it’s obvious why policy experts agree that Cabrini had to go—it looks invasive, alien, and dirty. Especially when you compare it to all the new, probably market-rate, construction that surrounds it.

Hoping to find someone willing to talk to me about the redevelopment (I had little luck with CHA*, see endnote), we crossed the parking lot, only to be heckled and hollered at by residents hanging out on the upper floor’s famously caged-in “balconies”. Feeling it would not be worth it to enter 1230, and talk at closer range, we walked past a rusting playground, towards the old elementary school to find another pair of men making some sort of documentary on Cabrini. Whether for camera angles or other purposes, they had set up shop really far away from 1230.

Looking at the 80% demolished building across the way, from its south side, you see an oddly touching sight: a patchwork quilt of colors working its way up the center of what’s left of the building, five decades worth of interior paint jobs. It’s a sobering reminder that aside from being a cesspool of the worst of human behavior, Cabrini-Green was also home to thousands of people, and plenty of people made an effort to keep decent households, behind those dingy white walls, and caged-in balconies. Just because something looks so stoically oppressive and wrong from the outside, it doesn’t mean it’s impossible for people to live well within.

In other words, while Cabrini’s design was bad, design is not destiny—people ultimately make their environments. In Cabrini in the 80s and 90s, people made a terrible one, worthy of a horror film. But we shouldn’t make Helen’s fatal flaw when we remember Cabrini. If we remember Cabrini’s horrors as being tied only to its design, we might forget the real horrors of urban poverty, and the horrifying behavior that it can bring out in people. To my knowledge, Le Corbusier never handed anyone a gun.

For a front lawn, Chicago’s Millennium Park is really something, and the Bean, like most lawn ornaments, is at once bizarre and impressive. The Bean—more officially, Cloud Gate— is the nickname for the Anish Kapoor sculpture that sits in AT&T Plaza, right by Michigan Avenue. It’s a gigantic, reflective, kidney-bean-shaped sculpture that essentially functions as a public fun-house mirror, and a catalyst for boring Facebook photo albums. 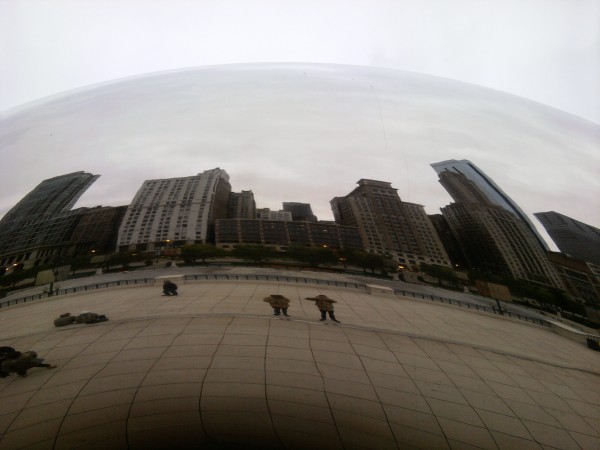 In an age where taking pictures of yourself, and sharing them with friends and strangers on the internet is as important as anything else, the Bean is the perfect tourist attraction. Most people go to the Bean just to take pictures of themselves in the Bean. One supposes that entails taking pictures of the Bean, but it really doesn’t. Some are more creative—one kid I saw was wearing a Barack Obama mask doing the ‘Dougie’ for his friend’s camera—but it’s ultimately all variations on a theme. Judging from the crowd, you’d think that there’s nothing to do but take photos, mostly of yourself, and look at this bean that reflects back images both of the city of Chicago and its residents and visitors, to its residents and visitors. You’re looking at this objet d’art, and yet you’re not looking at it at all.

Looking at the crowd at the Bean, and thinking about how this was something I was more curious to see than the Sears Tower or Wrigley Field, it makes one who covers federal urban policy wonder how wise it is to create policies that are meant to change people’s behavior. How in the world can you predict what people will want to do with themselves? Some people don masks of our president and do a dance called the Dougie, and put it on the internet. Some people can take 80 photos of their own Bean-distorted reflection, while they’re surrounded by strangers, and put about 20 of them online—and not feel bad about it. People are strange things.

But what were the artist’s intentions? According to Wikipedia (this section cites Timothy Gilfoyle’s book Millenium Park: Creating a Chicago Landmark, faithfully, we hope), Anish Kapoor’s art deals with dualities in human nature and experience, and often references Eastern religions in doing so. While creating a piece that contemplates the interconnectedness of the sky and the earth, of subject and object, etc, etc, he actually created a photo-op, and a great one at that. With public art, like public policy, we must create things, and only find out later how people use them.

Bizarre as the Bean may be, and as sad as the sight of Cabrini-Green is, they’re both excellent reminders that cities are populated by people, and that people are very, very odd.

*While CHA has done a lot to improve their image, they are still virtually impossible to contact. Every phone number related to the Cabrini redevelopment was disconnected, their press inquiry line was a fax machine, from what I could tell, and they simply didn’t respond to my emails.