Hamida Kinge reports from The Feast, a social innovation conference in New York City that brought together ambitious philanthropists and entrepreneurs from a number of industries to talk about their goals, beliefs and “a ha!” moments.

How a propos for Jay-Z’s “Empire State of Mind” to be playing from the lobby speakers at the glossy Times Center during registration for The Feast conference last Thursday. It’s a song that epitomizes a make-it-happen attitude. And that’s part of the raison d’etre for the conference: to not just gather some of the world’s most impressive social innovators but to galvanize and empower the 200+ audience of potential future game-changers to go beyond good intentions. For those unfamiliar with the phrase, Wikipedia defines “social innovation” as “new strategies, concepts, ideas and organizations that meet social needs of all kinds – from working conditions and education to community development and health.” 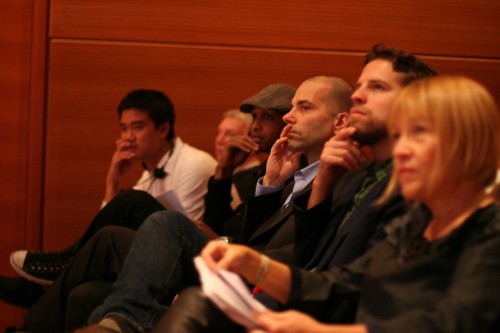 This was a day of mammoth ideas, or rather a day to demonstrate that mammoth ideas are doable with the right mix of drive, heart and strategy. In her opening remarks, Oxford-educated Brit moderator Cindy Gallop (of TED lecture fame) said the goal of The Feast is to inspire true collaboration across industries, with “across industries” being key. The problem, her remarks suggested, is that people stick to their professions and never think about how they can collaborate with those from other industries to make change happen. That, then, was the impetus for inviting speakers (and attendees) from seemingly incohesive areas – speakers like poker world champion Annie Duke and Economist chief business writer Matthew Bishop and FrontlineSMS mobile phone technology innovator Ken Banks.

I was a skeptic at first, but after a day of listening to speeches, stories and anecdotes and watching video or slide presentations, I appreciated the logic behind the selection of speakers, and quite honestly felt a bit inspired myself. As it turns out, the speakers had one thing in common: Regardless of their industry, they had the desire to change or improve systems that weren’t working, and they leveraged that desire into what conference organizers Jerri Chou and Michael Karjanaprakorn call “world-shaking change.”

Many of the speakers shared their defining moment or moments. That moment for dapper, Ethiopian-born, Virginia-raised musician Kenna was just last year, when he learned his father nearly died as a child from a waterborne disease he contracted from a polluted well in his home country. Kenna would soon found Summit on the Summit to focus on the global lack of clean drinking water, and climb Mt. Kilimanjaro with Justin Timberlake and other stars to bring attention to the matter. “It isn’t an Africa problem,” Kenna maintained, citing that 11 million people in America go without clean water every year.

The eureka moment for Elizabeth Scharpf happened when she was working in Mozambique for Harvard graduate research in international development. One day she realized that the statistics-based, often bureaucratic-laden profession was just not for her – that she could contribute to development in a much more direct way, a much simpler way: by making maxi pads. This was after she’d learned that many women missed work and girls missed school in parts of Africa merely because they lacked sanitary pads. So she founded Sustainable Health Enterprises (SHE) to address these and other health challenges through market-based approaches. If the economy of many African countries depends on women and girls, she reasoned, loss of school and wages amounted to a loss of hundreds of millions of dollars annually for these countries.

Among the most fascinating speakers were Matthew Bishop, who talked about “philanthrocapitalism,” and Josh Viertel, president of Slow Food USA, who began by asking the audience “How many of you engaged in an agricultural act in the last 24 hours?” One woman said, “I ate.” That was the answer he was looking for. The gist of his speech was to demonstrate that everyone’s eating behavior contributes to agricultural policy. “It’s not enough to vote with your fork,” he decried, asserting that advocacy was also necessary.

It was 24-year-old Brian Bordanick that would bring the audience to their feet in a standing ovation at 5pm, the close of the day. His 9th Ward Field of Dreams is helping to rebuild a New Orleans high school. This was the young volunteer teacher stationed in the 9th Ward’s George Washington Carver High School, which had been devastated by Katrina’s wrath. Brian would become the school’s athletic director by default when the former one quit. His words seemed to resonate with attendees at a higher frequency than the others. Maybe it’s because it was a tale of triumph about the ultimate underdog of American cities: New Orleans. Maybe it was because Brian mirrored much of the audience – he was a young, all-American 20-something with big philanthropic goals, and so, like them, he was an underdog himself. He, after all, had to get community residents to take him seriously, and get the NFL to take him seriously – he applied for an NFL grant to build a football stadium and track at the school. And of course, right when he felt like giving up, convinced the odds were stacked too high, the community began to support the project and the grant came through.

Like the other speakers at The Feast, Brian had his “aha!” moment. It happened one day when he was overwhelmed and falling to pieces emotionally in front of his students. When he said aloud, “I don’t think I can do this anymore,” one of the students put his hand on Brian’s shoulder and said, “Baby, ain’t nobody asked you to do this in the first place.” That’s when Brian realized he was there not out of obligation but because of a calling to “change the game” so to speak. Like the rest of the conference presenters (and attendees), he was there out of an internal necessity to shape the world around them.

Cindy Gallop closed the day with the final question to attendees: What are you doing to create world shaking change?