An in-depth look at how public-private partnerships helped guide the fates of Indianapolis and Detroit.

Funding for this article was provided by Living Cities.

Although you might not guess it today, Detroit and Indianapolis once had much in common. Thirty years ago, both cities suffered from decreased economic activity, severe unemployment, violence, white flight and racial tensions. But Indianapolis, the nation’s 13th most populous city, has since recovered from those challenges, which were spawned by deindustrialization and suburban job growth. In 2008, Forbes named Indianapolis as one of its “Ten Best Cities for Jobs,” and CNBC called Indiana the “most improved state for business.”

Detroit, by contrast, has continued its decline. It has one of the highest foreclosure rates in the country; swaths of abandoned buildings illustrate the metaphor of a broken city. Although New Orleans and Camden, N.J., bumped Detroit from first place to third in a 2008 list of the most-dangerous cities in America, Detroit is still invoked as a preternatural example of urban blight. Median household income is a paltry $29,526, and a whopping 26.1 percent of the population lives in poverty. This month, its unemployment rate hit 10.6 percent, compared with Indianapolis’s 7.1 and the national average of 7.6.

What accounts for the drastic disparity in these two cities’ fortunes? Many politicians and members of the business community suggest that public-private partnerships — deals in which the government partners with the private sector to deliver a necessary service that it cannot afford, or which it wishes to provide more efficiently — have allowed Indianapolis to prosper. City governments can form PPPs to support small-scale projects, and may also lease the operation of their own assets, but if they want to forge a PPP to back a larger initiative, like a massive infrastructure project, they need legislative support from the state. Indiana law permits the formation of PPPs for infrastructure projects; Michigan law does not.

Former Indianapolis mayor Bart Peterson agrees that these partnerships played a prominent role in his city’s revival. “If you go back 40 years to when I was a kid, Indianapolis didn’t have a heck of a lot going for it,” he says. “The city dug itself out of that mess … by recognizing that the government couldn’t do it alone and private business couldn’t do it alone. But if they shared a commitment to turning the city around, piece by piece, year by year, together they could get it done.” 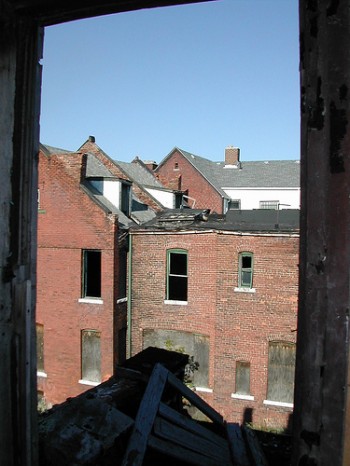 Abandoned buildings in Detroit. (Image by Luca & Vita via flickr).

The average American city works with private partners to perform 23 of 65 basic municipal services, says Rick Norment, executive director of the National Council on Public Private Partnerships. In a PPP, Norment explains, “the private sector takes on some risks that it wouldn’t under normal contracting.” It also provides money, design, or technology to help the government better meet the public’s needs. Norment points out that the deal structure may be employed in stable urban centers like New York, where a PPP enabled the 1994 renovation of Grand Central Terminal, but it is also key to revitalizing depressed urban areas, as Indianapolis once was. Still, only 23 states have legislation permitting PPPs to foster transportation-related infrastructure, such as highways, toll roads, and rapid transit, critical both for public safety and attracting business.

Some states have been slow to adopt PPP legislation because the deal structure can be viewed with suspicion. Unions may misunderstand how such partnerships function, says Norment, while local officials express concern that PPPs take jobs away from the public sector or allow big companies to come in and “squeeze out” local contractors. Also to blame: a lingering mistrust of the private sector stemming from the Depression era, when the government began taking responsibility for things it hadn’t before, and projects which the government funded alone, like the Eisenhower Interstate highway system.

“There is also the idea that taxpayer money is being invested in a project that is going to be owned by somebody else,” adds Peterson, “that it is not appropriate to put public money into an enterprise that is at least partially for-profit.” That’s not, he concedes, an irrational point of view. But, he asks, “What’s the alternative?” 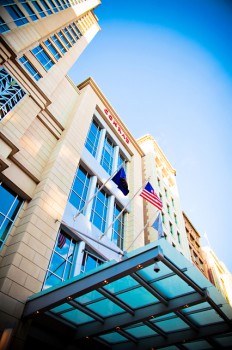 The luxury Conrad Hotel in Indianapolis, built through a public-private partnership. Photo by Jessica Strickland.

Political will also determines the success of these partnerships. Indiana’s governor, Mitch Daniels, initiated the public-private Indiana Public Development Corporation in 2004, and in four years it brought some $18 billion in new investment to the state. In 2006, Daniels leased the Indiana Toll Road to Cintra-Macquarie, a Spanish-Australian company. To date, the $3.85 billion deal represents the nation’s largest privatization of public infrastructure. The Government Accountability Office found that Cintra-Macquarie’s contract holds the company to a “higher level of performance than when the state operated the highway,” according to the U.S. Department of Transportation. Daniels, like Peterson, is an example of something Norment believes is critical for public-private deals to succeed: strong political leadership.

By contrast, leadership in Michigan, and specifically in Detroit, has not been as focused. Former Detroit Mayor Kwame Kilpatrick stepped down last fall as part of a deal struck with prosecutors following legal problems resulting from a sex scandal. Kilpatrick, only 31 when he was elected in 2001, served four months and was released in early February. He is the third Detroit mayor to serve time in the past 70 years.

Present mayor Kenneth Cockrel, Jr., took office in late September and is, according to spokesman Daniel Cherrin, “very open” to PPPs. In his deficit-reduction plan, released in January, Cockrel calls for leasing the operations of municipal parking, the Detroit-Windsor Tunnel, and public lighting to private companies, a move that could raise up to $250 million for the city. He has also announced plans to create a 3.4-mile light rail system that will run down Detroit’s Woodward Avenue. The project is enabled by recent legislation from Governor Jennifer M. Granholm, which allows the creation of nonprofits to build and operate railways in Michigan. Detroit, which has a bus system, is the only major U.S. metropolitan area without rapid transit. A date has not yet been set for groundbreaking.

In spite of Cockrel’s advances, to a large extent the future of PPPs in Detroit will be decided by the city’s new leadership. The city will elect a new mayor in May, but the winner will only hold the post until December 31 – what would have been the end of Kilpatrick’s term.

The mood toward public-private partnerships in Michigan does seem to be changing. The state held its inaugural PPP summit in September 2008. Attendees at the Detroit meeting included representatives from the International Union of Operating Engineers Local 324 and private-equity firm Macquarie Capital. And at the end of last year, Michigan set up its first office of public-private partnerships.

With the country in recession, property taxes declining, and increased stresses on public-sector programming, PPPs are going to become that much more important, says Tammy Carnrike, COO of the Detroit Regional Chamber, an organization devoted to developing southeast Michigan’s economy. So far, the state has benefited from deals advanced by local municipalities, many related to the development of alternative energies. These include an additional 1,054 acres of land for the Michigan Department of National Resources, the result of an agreement between the Conservation Fund and Wisconsin-based utility We Energies; Mascoma Corporation’s construction of an ethanol plant; and an initiative to replace fluorescent lights in the Escanaba State Office Building with energy-saving LED lamps.

“I think that Michigan has been looking at these issues, but it’s difficult sometimes,” says Aleksandra Miziolek, a Detroit lawyer whose practice focuses on mergers and acquisitions, infrastructure and finance related to PPPs. “It’s a very political issue where you need to have a lot of education of the legislators,” she says, citing term limits and legislator turnover as impediments. “Until last year we really didn’t have great momentum. Right now, the focus is to really get going on it.”

The timing is critical: in addition to money from Obama’s stimulus package, Michigan stands to receive a meaningful cash injection from the transportation reauthorization act, which is up for renewal this year and which provides funding to states for transportation and infrastructure-related projects. Yet, even with public funds, the state won’t have the money necessary to develop the many modes of transport it needs, says Carnrike, who points out that Michigan has the capacity to develop air, roads, and water-related infrastructure. By collaborating with private companies, Michigan stands a chance at creating the infrastructure crucial to its economic recovery.

Carnrike adds that goods bought and sold in the northeast pass through the state. The vast amount of trade in Michigan, she says, is vital to our national well-being. “As goes this region,” she says, “so goes the rest of the nation.”