Pennsylvania was one of the states hardest hit by the collapse of the steel industry. But in the last few years, its rust belt has been getting a green makeover, thanks largely to the wind power industry. Still, despite a new president who’s pushing to create a green economy, wind power companies like Gamesa are struggling with the economic slowdown, labor issues and, surprisingly, pollution.

Last year was a particularly good year for wind power in Pennsylvania. By the end of 2008, the world’s second-largest wind turbine-maker, Spain-based Gamesa, had invested more than $200 million in the Keystone state, making it the company’s U.S. home base. It had also created close to 700 green manufacturing jobs and employed 1,160 state residents. 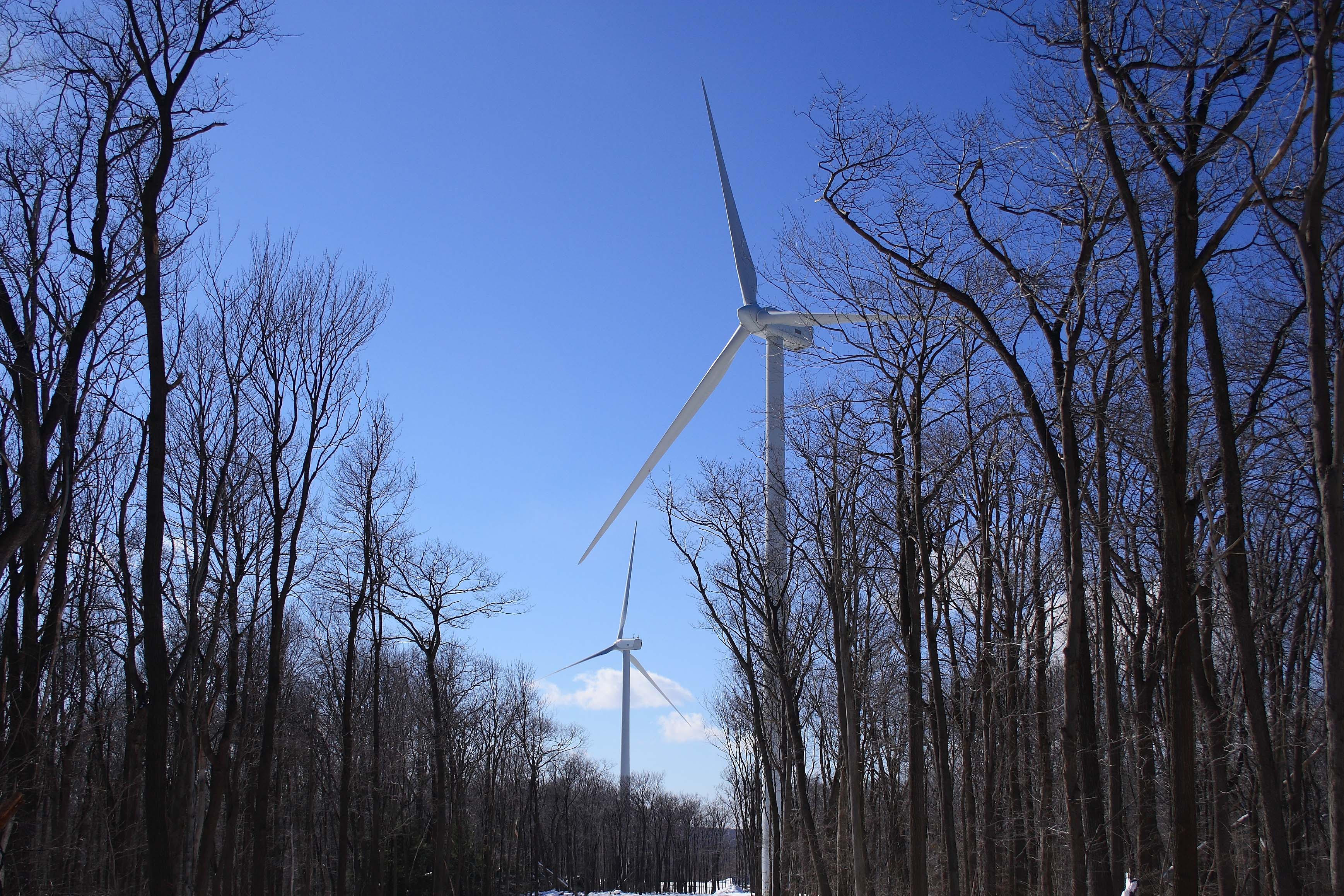 The energy produced by Gamesa’s two-megawatt turbines, like this one at Allegheny Ridge Wind Farm in southwestern Pennsylvania, provides residents with zero-emissions electricity.

The bulk of the jobs are at four manufacturing facilities, which opened in 2006: three in Bucks County, near Philadelphia, and one in Cambria County, in western Pennsylvania. The Bucks County facilities sit on 20 acres of a long-abandoned brownfield that once belonged to U.S. Steel, a site which also hosts a solar facility and several other businesses. Gamesa was applauded by the Department of Environmental Protection for its adaptive reuse of a brownfield industrial site, a measure that reduces sprawl and saves thousands of tons of building components from landfills.

The company’s investment in the state is part of a national trend in which once-industrial sites along the nation’s Rust Belt are metamorphosing into green manufacturing centers. (Iowa’s Rust-Belt region, for example, leads the nation in wind turbine manufacturing.) But despite the wind industry’s central role in the “green economy,” it has not been immune to growing pains, especially in the wake of the recession. Gamesa knows this first-hand. But the company’s seeming resolve to address challenges effectively and promptly may make it a valuable prototype for how green manufacturers can steamroll future bumps in the road. 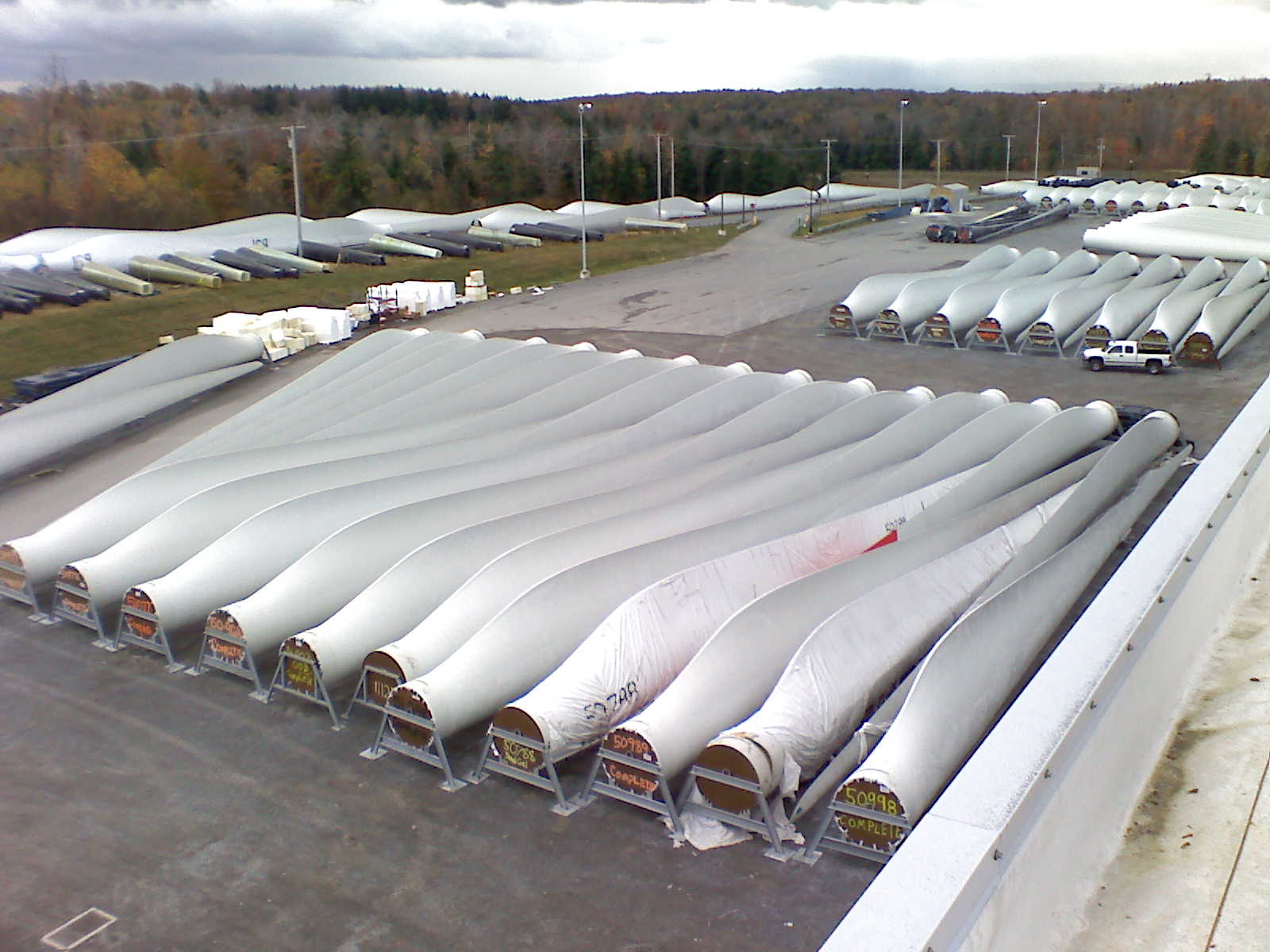 A few weeks ago, Gamesa announced that it will close the blade-manufacturing segment of its Bucks County plants and lay off 184 workers as a result. Michael Peck, Gamesa’s director of media, institutional & labor relations, explained that the company plans to shift blade production to its Cambria County facility, where it is able to produce larger blades. The market, he says, “is moving upstream in terms of the [blade] size.” The blades portion of the Bucks plant will eventually switch to making nacelles, the oblong part of the turbine that sits behind the blades and houses the complex mechanics of the turbine. But Peck says the switch, which involves a lot of construction, will take time. Soon, Gamesa will stop making its own towers, too, as a European tower manufacturer will be housed at its Bucks County tower facility. Peck wants to see Gamesa bring a handful of its existing overseas subcontractors to Pennsylvania to help reinstate some of the lost jobs, and is working toward making that a reality. (Some of their subcontractors are already U.S.-based; others remain in Europe.)

Gamesa isn’t the only turbine maker suffering job cutbacks. North Dakota-based DMI Industries, for example, has laid off 20 percent of its workers in its three plants (in Tulsa, Okla.; Stevensville, Ontario; and West Fargo, N.D.). And L.M. Glasfiber, a Danish company, announced 150 layoffs this month at its blade-making plant in Arkansas. “Just like virtually every industry in the country, the wind industry as a whole is being impacted by the slow U.S. economy,” says Denise Bode, CEO of the American Wind Energy Association.

But Gamesa has also faced challenges unrelated to the recession. One is that of training green-manufacturing workers. “We have lost a generation of skills in this country because manufacturing has been shipped overseas,” says Peck, “and we now need to retrain our people in key manufacturing areas to keep up with the renewable energy sector.” In the past, Gamesa has had to send some of its green-collar workers to Spain for training. Now, “Bucks County Community College is our primary source of training,” Peck says. The college performs on-the-job and technical training and is currently putting together a professional development program for the company’s management team.

Gamesa has also encountered a problem its steel-making forebears would understand: pollution. Although the energy derived from wind power is irrefutably clean, its production can be a surprisingly dirty process. Last August, Gamesa was fined $639,161 by the state’s Department of Environmental Protection for emissions and record-keeping lapses at its Bucks County facilities. The emissions consisted of volatile organic compounds (VOC) from solvents and adhesives used to make the blades and other turbine parts. Peck explains that that the facility is located in an area of the state where “the company faces more stringent air quality standards, especially for VOCs.” (Since the southeast part of Pennsylvania does not yet meet national ozone standards, it faces stricter regulations.) The company quickly paid the fine, and to combat the emissions, it invested $945,000 in a regenerative thermal oxidizer at the facility. The oxidizer captures and destroys the compounds and, Peck says, “is among the best available technology to control air emissions.” Gamesa is not alone in facing emissions problems. A recent study by the University of Wisconsin shows that wind turbine plant materials and construction have much higher greenhouse gas emissions factors than those of coal. But overall, wind energy has one of the highest energy payback ratios.

The DEP’s Lynda Rebarchak says that it’s not unusual for a plant of Gamesa’s size to encounter problems in its startup years. “We work to attract these companies — solar, wind, and other alternative energy facilities — and welcome them to Pennsylvania,” says Rebarchak. “We also work with them to ensure protection of the environment, and companies are open to that.” 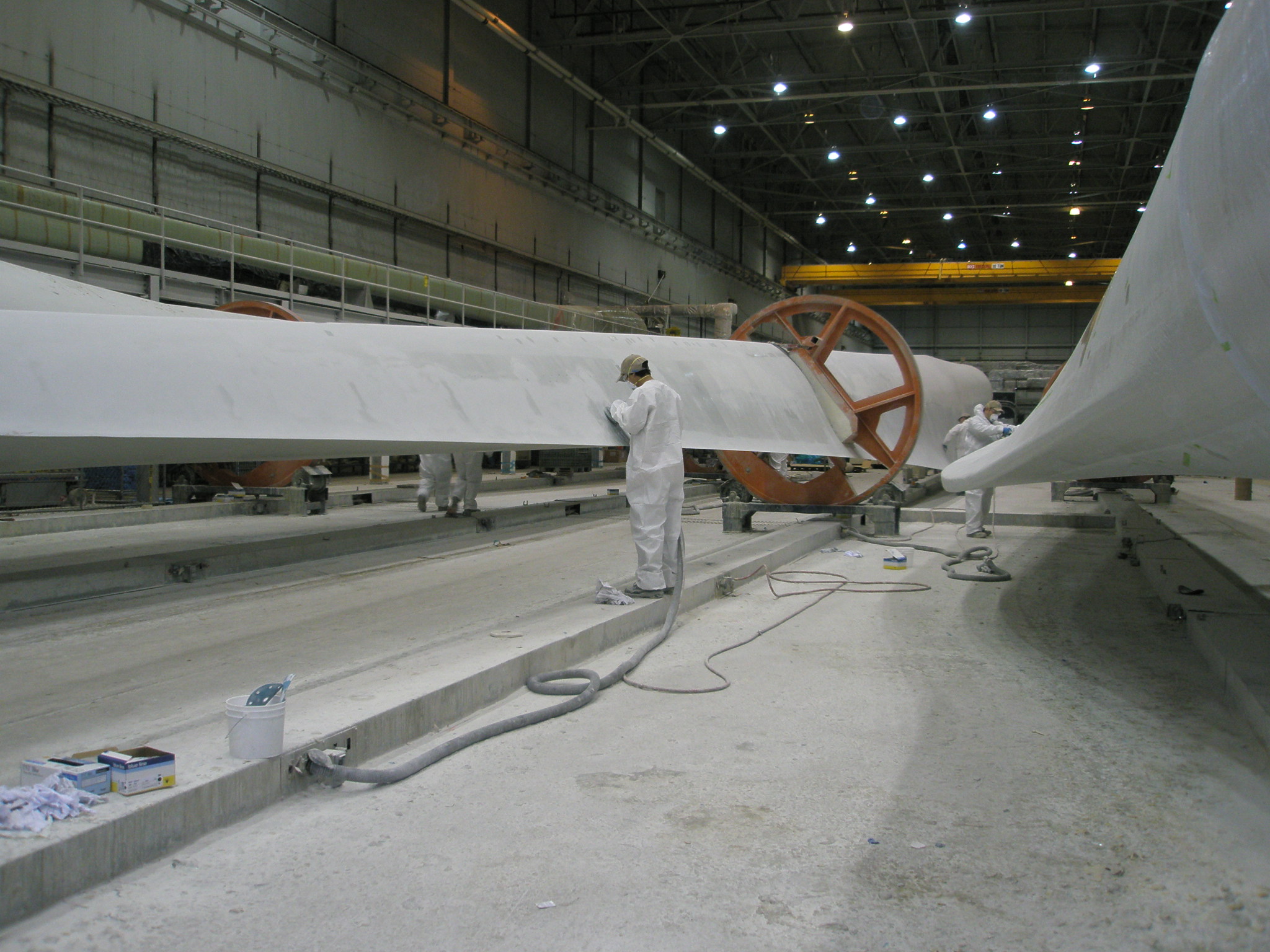 The 148 workers from the blades segment of Gamesa’s Bucks County facility, just outside Philadelphia, were laid off in the last few weeks

Mandates in every state are propelling wind and other green-energy markets, but Pennsylvania has particularly substantial draws for alternative-energy businesses. By 2020, the state is required to produce 18 percent of its energy through alternative sources. Last year, Governor Ed Rendell revised the state’s energy independence plan to include over $800 million in state resources, and he hopes to attract over $3 billion more in private investments and create 13,000 jobs, many of which will be in wind energy.

Still, wind power’s impact remains small, making up only about two percent of the country’s overall energy use. Last year, a Department of Energy report concluded that the United States could potentially get a whopping one-fifth of its electricity from wind, which would add over three million jobs. AWEA’s Bode says that it’s vital that the economic stimulus package making its way through Congress be passed quickly. She may be in luck: The same week President Obama took office, he proposed $54 billion dollars in stimulus for renewable energy. The wind industry can dramatically stimulate economic growth and recovery, says Bode, pointing out that more than 50 new manufacturing plants were announced in 2007 and 2008, adding thousands of manufacturing jobs to the domestic economy.

State mandates, the proposed stimulus plan and Obama’s goal of doubling the use of renewables will help to ensure that wind turbine manufacturing jobs do not meet the same fate as their Rust Belt ancestors. And the turbines have one other asset: they are colossal, so producing them in the U.S. is actually cheaper than having them shipped from overseas. Consequently, they’ll likely never be outsourced.

How to Combat Inequality Through Economic Justice Initiatives

A Florida Study Showed How to Save Energy at Home. Why Aren’t More Cities and States Following Suit?

A Birmingham Landmark Rises Again as a Community Startup Hub

From Pre-K to Political Willpower: The Economic Case for Investing in Education

Solutions Beyond the First 100 Days: Economic Development and Recovery