Next American City’s Jeffrey Hill was on hand at The Brookings Institute’s Hamilton Project panel discussion last Friday, validating his predictions over the last few months over infrastructure. As Linda Richman would say – America’s infrastructure is neither “in” nor “structured,” discuss…

The Brookings Institute’s Hamilton Project intended to give the U.S. Federal Communications Commission (FCC) a piece of their mind, with suggestions to recharter, relicense and redistribute the wireless broadband spectrum necessary to build the infrastructure it feels America needs. Investing in America’s Infrastructure was an enlightening discussion that went beyond parameters to discuss the technological problems we face in the immediate future.

The problem for cities is that the federal government, in terms of technology, is the most state-of-the-art organization in the world while municipal governments are one of the least. How do you collect data and research on what infrastructure you’re going to need to build when you’re still managing all of this information in a metal filing cabinet covered with half-torn “McGovern ’72” stickers? How do the federal government, states and municipalities effectively communicate with this fragmented pipeline of information? They don’t. Hence: Katrina, the Minneapolis Bridge collapse, child poverty in Philadelphia and a myriad of other problems waiting to happen. There’s nobody specific to blame this time. The bottom line is – we need to grow and connect out of this economic soup with state-of-the-art technology, or continue to lag behind Sweden, Korea and in the next few years, China. 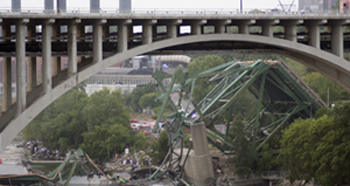 The Minneapolis Bridge Collapse was a consequence of poor planning and communication.

So we’re light years behind Japan and Europe. Our roads are falling apart. The city and rural areas are still divided by a decade of progress. Our education system isn’t churning out enough smart people. Europe is amazing. The Iraq War sucks. Yeah, yeah. Tell us something we don’t know. How about a state-of-the-art broadband mobile and telecommunications infrastructure that will save America 15% in energy costs? That’s what Virginia Governor Tim Kaine (D) said to journalists and politicians during the presentation and panel discussion’s opening remarks, seconded by Philip Weiser, professor of law and telecommunications at the University of Colorado, Jon Peha, professor of electrical engineering and public policy at Carnegie Mellon Univerity, and Robert Rubin, former director of the National Economic Council during the Clinton administration. Lawrence Summers, a professor of public policy at Harvard University, give the idea his own terrorist fist jab – “Telecommunications infrastructure is the long term investment in the need for fiscal stimulus.”

How do we finance all this growth? Prof. Summers says that long-term fiscal stimulus and infrastructure are married. Critics disagree and say that traditional infrastructure comes first. Everyone agrees that the current Bush administration’s infrastructure finance plan – take money from the rail budget and dump it into highways so more people drive and ruin the roads faster and then take trains again because they can’t afford to drive – is completely idiotic. How do democrats differ? They take the money from what is called our “general budget,” you know, our money, and put it into infrastructure instead of spending it on new roads in Iraq so that Haliburton engineers can get to Basra without navigating through a “hostile” village. It’s all about priorities.

Here’s an interesting approach to financing infrastructure: Governor Kaine says Virginia spends the money accrued from the tobacco tax to connect tobacco producing regions to major city areas via broadband, enabling voice and video conferencing, and a much quicker exchange of information. People who live in these areas can now telecommute to work (Where did we head that word before?). What’s the current, traditional use of the tobacco tax? Dump it into healthcare. Does that strike anyone else as ironic?

The physical infrastructure panel presented findings set on one goal – make people drive less. The panel suggested that auto-insurance companies switch policies to a “per-mile” basis, which reduces driving-related accidents and increase equity. A safer and more reliable air traffic control system was brought to the table as well, including the shaky high-occupancy toll lanes idea. They also stipulated that research and data methods be updated — which brought the discussion back to technology. 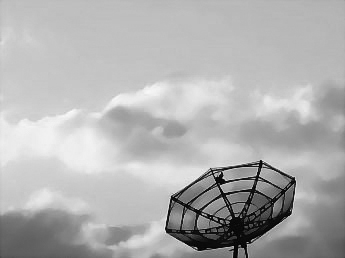 “One study found that for any part of a four-day period in New York City, only 13 percent of the wireless spectrum was in use” -Brookings Institute

Interestingly enough, while this was all going on, a private equity firm named Harbinger, offered $500 million worth of funding to three satellite companies to buy up a large chunk of the broadband spectrum. While these companies are based in the U.K., will someone in the U.S. take notice? According to the Brookings study, only 13 percent of New York City’s total wireless spectrum is in use. Every major executive in the telecommunications industry I’ve interviewed in the last month has said the same thing – “our broadband capability is so untapped, it’s embarrassing.”

What do we away from the event? For one, nobody in this economy cares about a bipartisan solution. You can go with the dems’ plan – become a state-of-the-art, well connected nation, with rust belt cities producing fiber optics, satellites and mobile IP routers so we can have all the fun toys (and manufacturing jobs) they have in Korea, or continue on as-is and just react when something like Katrina happens again or pay a masked genius $300 million dollars for the magical solution that will free us from foreign oil, as McCain suggests. Who wants $300 million? Let’s all race for it. Ready, Set, Go! 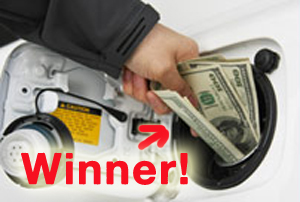 -You can power your vehicle with your $300 million prize!

Housing in Brief: Tenant-Owned Housing Gets a Boost in D.C.