Are suburbs the next target for economic blight? In a recent piece for The Atlantic, professor of urban planning at the University of Michigan and Next American City interviewee Christopher B. Leinberger details how culture and economics over the past 20 years have influenced where we live and, maybe more importantly, what may happen to the places many Americans grew up.

Between ever-rising gas prices, the dwindling economy, a housing market crisis and jobs becoming harder and harder to find, cities are looking like more appealing places to live than ever. In Mr. Leinberger’s piece, he details not just how the economic landscape is shaping people’s decisions over where to live but also how the changing culture in America has affected attitudes towards city living. “Cities, of course, have made a long climb back since then. Just nine years after Russell escaped from the wreck of New York, Seinfeld—followed by Friends, then Sex and the City—began advertising the city’s renewed urban allure to Gen-Xers and Millennials.”, says Leinberger, referencing t.v.‘s influence on cultural perceptions with regards to city life. 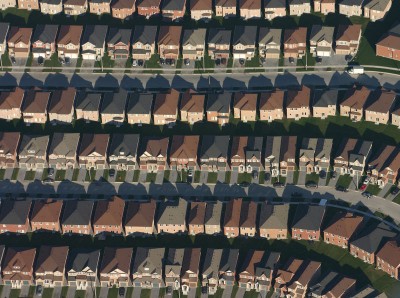 Meanwhile, the financial incentive to live in the suburbs decreases everyday. The sharp rise in oil prices has continually increased the cost of living in these once low-priced areas and the subprime-mortgage crisis didn’t help to assuage the problem. Add to that an economy divided between service jobs and professional jobs and you have a country of people heading towards city life — or at least city-style living. “Lifestyle centers”, cultural hubs for one or more suburban towns/cities have begun popping up across the country, offering dining, shopping and entertainment within walking distance of residences.

Also important about the piece is it’s study of the housing market versus childbirth statistics. As the baby-boomer generation quickly becomes “empty nesters”, the demographic landscape of America quickly morphs into something much different — according to U.S. Census data, “By 2025, the U.S. will contain about as many single-person households as families with children.” Those same “Gen-Xers and Millenials” mentioned earlier are having children later in life and with less frequency than the generations that came before them.

Anecdotally speaking, this 23-year-old journalist has few married friends, none the less child-bearing friends. After spending four years living city life on two different continents, the sprawl (and expense) of suburban living offers little in the form of incentive for me to move there.

How has American culture, none the less economics, affected your lifestyle choices? What are some solutions to the possible future Mr. Leinberger posits in his piece? We want to hear from you!

The Cars May Not Need the Parking, But All Those Other Vehicles Do